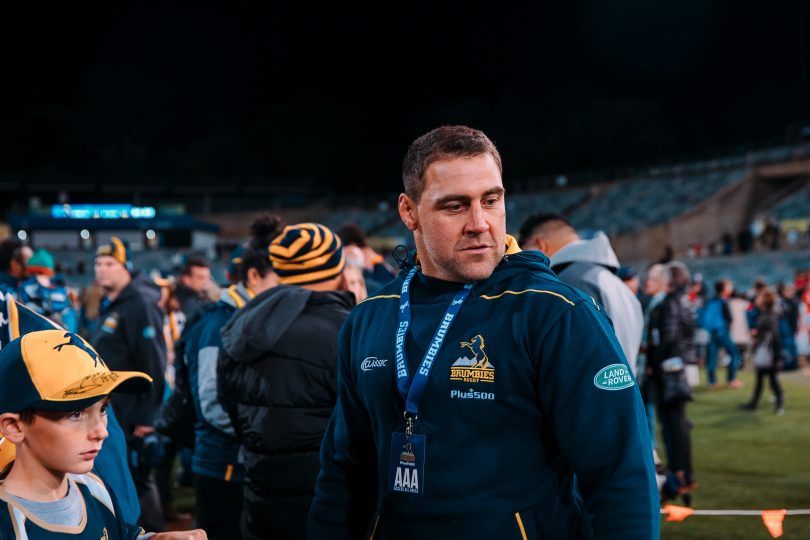 Mann-Rea is expected to be named on the Canberra Vikings’ bench for their clash against the Western Force. Photo: Ben Appleton.

Brumbies hooker Josh Mann-Rea knew something was terribly wrong when his leg went numb and he couldn’t stand up after a suffering a horrifying injury during a clean-out gone wrong earlier this year.

But the veteran hooker was determined to come back bigger and better and is set to complete his comeback this weekend.

Mann-Rea is expected to be named on the Canberra Vikings’ bench for their clash against the Western Force, which will be a significant moment for the 37-year-old hooker who went under the knife to reattach his hamstring to the bone only six months ago.

“The last month or so has been pretty good. I have been training with the boys and doing a lot more team stuff. The first few months were pretty tough because I couldn’t really do anything,” Mann-Rea said.

“I knew it wasn’t a good one because I just couldn’t feel my leg. Normally you get up and try to run it off, but I couldn’t feel it. So I thought this one could be pretty bad.

“Once I got the operation and the surgeon said it went well and once when I started running I was looking forward to getting back in the NRC.”

Now the veteran hooker is determined to have an impact for the Vikings in the NRC and to get his body ready for the rigours of another Super Rugby season next year.

“My goal was to get back for round one of the NRC, but that was a little bit keen. I’ve only played three or four games this year so I’m just keen to play. I want to get a bit of footy under my belt and test the hammy out and get a bit of confidence in it before we rip into pre-season,” he said.

“Its been just under six months since I had my surgery. I haven’t had any setbacks as yet, touch wood. For an injury like this, other guys have been forced out for 12 months so I have been very fortunate.”

Mann-Rea is expected to make his mark in the “crucial clash” against the Western Force, who remain unbeaten and in second place in the NRC after their bonus point 54-28 victory against the NSW Country last weekend.

“The Force is quite solid. Their group has been together all year playing games so they have good, settled combinations, so it will be a really good test for us this weekend,” he said.

“We had a solid contact session last week and belted the hell out of each other so I got a bit of confidence out of that. After last week’s training, I’m feeling pretty good now. I just want to get back and play some footy. That’s what we’re here to do.”

Kit Oates - 5 minutes ago
Jenny Graves As I stated categorically above, I can't stand tailgating. Apology accepted. 🙂 Given that you have still not... View
Jenny Graves - 2 hours ago
Kit Oates those people who get impatient, in my experience, tend to tailgate. If you don't, then that's great and I apologise... View
Francesco Merlino - 3 hours ago
Alex Dee Alex Dee I hope you are right! View
Food & Wine 9

MERC600 - 35 minutes ago
Have had my first shot of Astra. Had some Panadol the next day due to a bit of a headache. But am unsure if headache due to A... View
Ol L - 3 hours ago
Good friend passed out the evening after after the AstraZeneca shot, hit her head and had 10 stitches. Not a blood clot so no... View
nothappyjan - 5 hours ago
Had pretty much the exact same side effects as you, suppose it shows it is actually doing something for my immune system. Wil... View
Breaking 1

Ol L - 1 hour ago
Canberra. If the traffic gets bad just put in more traffic lights, that’ll work real good…..check out Hindmarsh Drive Phi... View
Deepak Ramanath - 2 hours ago
James Forge Wow, where is this? View
James Forge - 2 hours ago
Deepak Ramanath the government is about to demolish an overpass and replace it with yet another set of traffic lights View
event 1

cats2dog1 - 4 hours ago
Batteries – with lithium ion or lead acid will be the new asbestos problem In 10 years. Salt-water batteries less of a prob... View
Property 34

Fran Corby-Moore - 6 hours ago
I'd like to know how many people registered lots of family members (like young children or relatives/friends outside Canberra... View
show more show less
*Results are based on activity within last 7 days

@The_RiotACT @The_RiotACT
@networkonegroup is a great way for business owners and professionals to meet new contacts, support each other and help grow their businesses https://t.co/Mbktqyqcl5 (13 minutes ago)

@The_RiotACT @The_RiotACT
Canberrans have been warned against travel to metropolitan Sydney and ACT borders have been effectively closed to Sydney residents. Here's how the ACT is responding to the growing Sydney COVID-19 outbreak https://t.co/ftCMKm59mv (40 minutes ago)