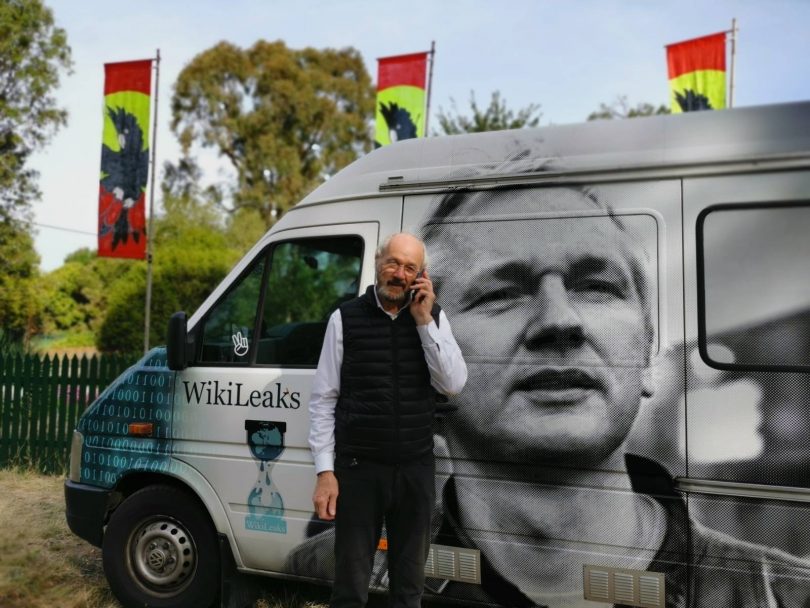 John Shipton has been protesting his son Julian Assange’s innocence since 2010. Photo: Supplied.

John Shipton, the father of WikiLeaks founder Julian Assange, who is currently in custody in London pending a High Court appeal, will protest outside Parliament House with supporters from 8:00 am on Monday, 15 March.

Mr Shipton is also due to speak at the Australian National University on Sunday night with former Deputy Chief Minister and lawyer Bernard Collaery. Mr Collaery is on trial for allegedly unlawfully sharing protected information about an Australian spy operation that bugged allies in the Timor-Leste Government in 2004 when Australia was negotiating for oil and gas resources in the Timor Sea.

The whistleblower, David McBride, will also speak on Sunday night.

Mr Shipton is calling on the Australian Government to bring Mr Assange, 49, back to Australia.

Mr Assange is currently awaiting the result of an appeal to the High Court in England, which will decide whether he will be extradited to the US where he has been accused of conspiring to leak classified material in 2010.

Mr Shipton claimed there was strong support for Mr Assange’s freedom in Australia and that it had grown during his “Home Run for Julian Assange” tour, which started on 28 February and has passed through Melbourne, Castlemaine, Bendigo, Albury, Wagga Wagga, Goulburn, Bathurst, Katoomba and Parramatta.

Mr Shipton has been campaigning to clear his son’s name ever since the US Government launched a criminal investigation into WikiLeaks in 2010.

Mr Assange grew up with his mother Christine Hawkins and step-father Brett Assange but reconnected with his father later in life. Mr Shipton visited his son in London every year and spent every Christmas with him while he was under the protection of the Embassy of Ecuador in London.

However, COVID-19 put a stop to the visits, with the pandemic also cancelling organised rallies and placing Mr Assange’s prison into lockdown.

For the past three years, Mr Shipton has been campaigning in the UK and across Europe, America, South America and Australia.

While in America in January, Mr Shipton tried to meet with President Joe Biden to ask for the charges against Mr Assange to be dropped but said his plans were stifled when the riots broke out in Washington.

Mr Shipton said Mr Assange’s mental health wasn’t “the best” and had been affected by the 11 years he’s spent in confinement.

Mr Assange used his IT skills to hack into the databases of many high profile organisations and, in 2006, began work on WikiLeaks, which shared confidential information, including footage of US soldiers killing 18 Iraqi civilians.

Later that year, Sweden issued a warrant for his arrest over allegations of sexual assault, but Mr Assange avoided extradition by seeking asylum in London’s Ecuadorean Embassy.

After almost seven years inside the embassy, Mr Assange was arrested by British police. He has been in custody ever since.

Mr Shipton said his son had appealed for bail and would find out if his appeal could be taken to the US Supreme Court after submissions were made on 29 March.

For more information about the events on Sunday, 14 March and Monday, 15 March, visit Assange Freedom.

MLA Vassarotti just wrote about denial, deflection and defensiveness around sexual harassment. Is this what the Assange cheer squad are perpetuating?

Come and hear the speakers at the rally on the lawns of Parliament house 9:30 Monday

Julian Assange is being detained because he exposed the corruption of the US Government – the same Government that wants to try him.

Would you want to be tried by the entity that you exposed?
Do you imagine he would get a fair hearing?
He was warned by credible sources that he would not.

Everything he has exposed has been proven to be true.
Extrajudicial killings in Afghanistan, Iraq, US interference in other governments, torture at Guantanamo bay.
We all now know there were no Weapons of Mass Destruction in Iraq!
He has already been effectively detained for 11 years. Enough is enough.

and “A secret Australia”
Edited by Felicity Ruby and Peter Cronau

He is a hero for exposing the nefarious activities of governments around the world. But like many whistleblowers he is being persecuted for that. Propaganda and lies? You bet! Exposing them is what WikiLeaks does.

And which governments specifically are you naming Amanda? Is China included?

If he isn’t guilty why not fight it in court? We don’t want him in Australia to spread his propaganda and lies.

Why is Assange a hero, he hid in the Ecuadorian Embassy for 7 years instead of facing 2 allegations of sexual assault in Sweden?