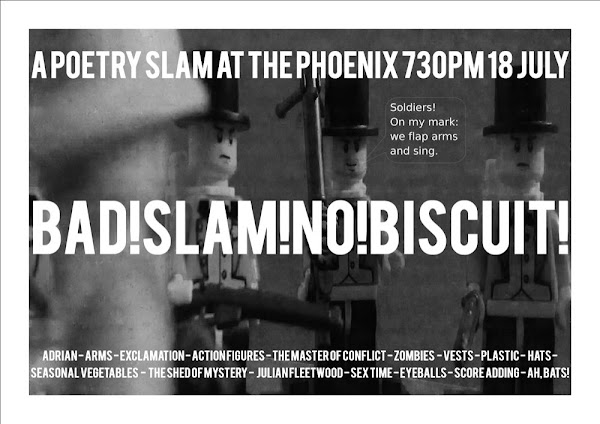 Last month’s Bad! Slam! No! Biscuit! featured a full brass band playing the poets in and out for what became a memorable evening despite the rivers of beer flowing.

This month facebook informs that RiotACT’s escaped musician Rafe Morris is performing. Which guarantees some good songs, but will he stay on duty providing the stings throughout the show? Only one way to find out.

If it wasn’t for HAMBURGER you wouldn’t have BAD!SLAM!NO!BISCUIT!

And in honour of HAMBURGER BAD!SLAM!NO!BISCUIT! in July! we bring you:

WE GIVE YOU TWO MINUTES TO PERFORM YOUR ORIGINAL MATERIAL WITH NO PROPS OR MUSIC ON A STAGE.

And there will be judging.

And because no HAMBURGER BAD!SLAM!NO!BISCUIT! in July! is complete without not only bringing you the stage with the two microphones, the opportunity to perform your poems to an audience, judging by The Master of Conflict, and the judging by the judges in the audience, and the adding up, we also bringing you two feature acts.

Feature Act I is:

So remember: NO MUSIC, NO PROPS, 2 MINUTES, YOUR ORIGINAL MATERIAL!
7:30PM at The Phoenix, East Row, Canberra, not HAMBURGER not provided.

Sue Sutton - 9 minutes ago
My Mum has wonderful neighbours who have been helping keep her lawn in check. Thank you Ota and family xx... View
Bill Gemmell - 54 minutes ago
Barbara Eglitis I was wondering how long it would take. Seriously, I had the Fowles St Park project in Weston in mind. Sugges... View
Barbara Eglitis - 60 minutes ago
Naturally occurring weeds, like the ones growing down the middle of Northbourne Avenue which looks disgusting??? View
Opinion 13

kenbehrens - 28 minutes ago
A few years ago when we were visiting our son in Sydney, there were blankets and items of clothing under shelter on the stree... View
jwinston - 48 minutes ago
harcm said “tim_c – what a load of rubbish you talk. What if your schooling was completely disrupted by domestic violence... View
Acton - 1 hour ago
The money you are giving out of misplaced guilt to a street beggar is just funding their drug, smokes and/or booze addiction.... View
News 1

ChrisinTurner - 43 minutes ago
Living in the inner north we now have to start planning to leave Canberra during SummerNats. Already the mufflers are being r... View
Public Sector 172

@the_riotact @The_RiotACT
A rehab #clinic specifically designed to assist #COVID-19 patients manage the ongoing symptoms of the virus is being set up at the University of Canberra Hospital https://t.co/WvD1IRUJRf (14 minutes ago)