Just can’t get enough of those wasps? 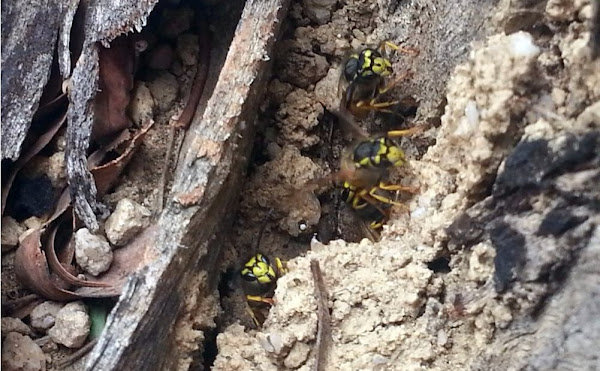 TAMS are putting out the call for someone to do a PhD on European Wasps:

Rangers from Parks and Conservation Services are working with researchers at the University of Canberra to investigate the biological impacts of European wasps. To do this, the university has established a PhD scholarship, for which they are seeking applications from prospective candidates.

European wasps are one of the most invasive insect pests globally. They are a social wasp that thrive in suburbia as well as wilderness areas.

“A huge increase in the number of European wasps in recent years has sparked the question into the impacts on their environment.

“Despite the increase, there is limited information on their biological impacts, as the major focus has been on control methods to lessen their impacts on humans, before now.

“We think that European wasps have a significantly negative impact on our native environment as predators to native invertebrates, in competing for food with native wildlife and by disrupting plant pollination.

“We will work with the PhD candidate to provide insight and guidance into this important research. The findings from the research will help to inform how European wasp control is managed in the future,” Mr McNamara said.

franky22 - 6 hours ago
Quick work by ACT Police - only 3 months ago. View
Property 6

Capital Retro - 7 hours ago
So, it will be called the "Opal of Colour"? Ridiculous.... View
Andrew Dale - 15 hours ago
Rory Bourke I'm both mate 🥸🥴 View
Lucas Anasdow - 17 hours ago
The Left are pushing to have the Event Renamed as the Term 'Black' is deemed to offensive and upsetting for segments of the C... View
News 32

Ashley Wright - 9 hours ago
Jennie Smith vast majority of the tram works were done in the median strip of flemmington road with minimal impact. There was... View
News 5

sisyphus - 10 hours ago
Better still, read some up-to-date peer-reviewed research. That film is primarily attacking historical straw men, presenting... View
jwinston - 17 hours ago
Watch “The Planet of the Humans”, a documentary by Michael Moore, to see the lie of renewables and so-called green energy... View
News 4

Robert Hawes - 10 hours ago
Should be done via the nurse walk-in centres. View
Lyn Christie - 16 hours ago
Ian E Wheeler maybe somewhere you can register if you don't see community nurse and are unable to get out to receive the shot... View
News 22

JC - 10 hours ago
Actually think you will find this “outcome” actually backs up my comments. Do you think both parties came to a $400,000 a... View
chewy14 - 11 hours ago
JC, The other week you were claiming the silence was due to pending litigation which now as we see (and I said) was false. Th... View
JC - 12 hours ago
Life doesn’t work like that. It’s quite clear that for the last year they have been in dispute with the builder over this... View
Community 20

@The_RiotACT @The_RiotACT
Spacey Jane returns to Canberra this weekend, playing two massive shows under the lights of the @canberratheatre. Find the details in this week’s #GigGuide, which features all the best shows in town https://t.co/MNHOt93RAV (7 hours ago)

@The_RiotACT @The_RiotACT
Joshua Higgins has pleaded not guilty to murdering Gungahlin man Jae-Ho Oh after a late-night fight on Canberra Day 2019. Please be careful with your comments, this is an ongoing trial https://t.co/iEO6xJF7hL (10 hours ago)