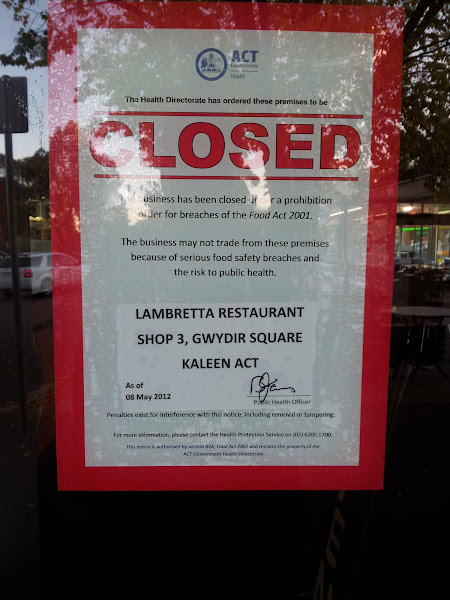 Golden-Alpine sent in this message of woe in Kaleen.

See the infamous red notices? Take a picture and send them in to images@the-riotact.com .

Does anybody know if Lambrettas have re-opened? I was going to give them the benefit of the doubt and make a booking for dinner there but the phone number I have off one of their flyer menus seems to have been disconnected and when I do a White Pages search for an alternative nothing comes up under Lambretta at Kaleen.

the previous owner owed lots of money to various suppliers.

Sounds right, according to a friend who worked there, the previous owners fled the country without telling staff. That is probably why that happened.

I have some nostalgia towards the place though – mainly because my year 6 graduation dinner was held there, though that was probably because the entrance to the school I was attending at the time was approximately 10 metres away.

I was just saying to Mrs Deref that we needed to try it. I’m glad we didn’t.

I ate here 2 weeks ago and felt a little crook afterwards but figured it was coz I indulged in dairy. Hope it wasn’t due to their pending red sign.

However I do remember the new owner telling us they have had alot of trouble since taking over as the previous owner owed lots of money to various suppliers. He said the worst was coming back to work over Easter to find his power had been shut off and all his food ruined.

We actually used to go here a fair bit when it was the Italian Kitchen. Had the best herb crusted lamb racks there once. We went last week and was so disappointed. The service and atmosphere was terrible, couldn’t even complain to anyone at the end because there was no-one there in charge. The food was actually alright but now seeing the infamous red notice I have to wonder and worry. After last weeks experience we wouldn’t go back, the red notice confirms it.

Pia Kivela - 2 minutes ago
Personally we are in a pandemic so we should not be having this tournament View
Milenko-Slavenka Jovanovic - 12 hours ago
Penny Ford Djoković is not just one of the other elite players, up to a few days ago, he was voted the players’ representa... View
Margaret Freemantle - 15 hours ago
Rosie Jennings we just don’t know- it would be handy if a copy of the advice was published View
Property 22

Matt Fallon - 2 hours ago
weekend breakfast Samantha Harding View
Moira Campbell - 5 hours ago
Nicole Fitzgerald this is the place I was telling you about! View
Joanne Trounce - 6 hours ago
Shannon Lee will make sure we do it!🥗🥗 View
News 5

Colleen Alchin - 6 hours ago
This situation is appalling! Forty minutes from the national capital and you need to buy bottled water to drink and wash clot... View
Tegan Gilchrist - 13 hours ago
Amy LD and the clothes!!! Swapped out all out white sheets for greys. Blazer ruined. I now fill up bottles of water from my p... View
Community 1

Lifeline Canberra - 6 hours ago
We love Sarge! Thank you for continuing to support the vital work we do in the Canberra community. Bring on Jan 30! View
Opinion 19

Kim Rumble-Kozjak - 6 hours ago
Jacqleequack it was all good fun until the two hour wait in the cab line, in stilettos, without a jacket in -2 🥶❄️ View
News 5

dolphin - 16 hours ago
excellent news. will be good to have some community playing fields for Gungahlin.... View
News 22

Jesse Mahoney - 17 hours ago
Shirley Hadfield a usual airfare that you see is a discount airfare (each airfare class has buckets - for example the cheapes... View
show more show less
*Results are based on activity within last 7 days

Prototype will make it easier to follow complex treatment plans

@The_RiotACT @The_RiotACT
The first Canberra Street Dance Festival is set to celebrate all the elements of hip hop culture including dance, music, art & fashion this Saturday https://t.co/aJNfRCcQBK (1 hour ago)

@The_RiotACT @The_RiotACT
Recent rainfall and run-off from catchments have caused the closure of many swimming areas in the ACT. Find out which ones are affected https://t.co/o6z6GP2WfT (4 hours ago)