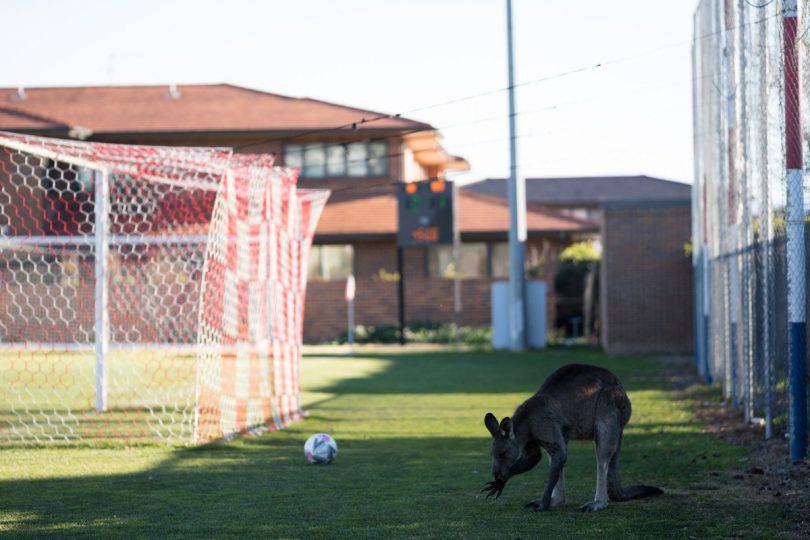 The kangaroo delayed the match by 20 minutes. Photo: Credit Lawrence Atkin and Supplied by Capital Football.

It’s not an unusual occurrence to see a boxing kangaroo at Australian sports matches across the globe but this live roo delayed the clash between Belconnen United and Canberra FC by 20 minutes.

The start of the second half of the women’s Premier League match was delayed after the roo would not leave the field despite the best efforts of the ground staff at Deakin Enclosed.

During the halftime break, the kangaroo appeared from nowhere, bounding onto the field before deciding the 18-yard-box was a perfect spot to lie down and sunbathe.

When the players emerged from the sheds, the kangaroo stood its ground and was defiant in its desire to fill in as a goalkeeper.

When staff decided to test out its skills by passing the ball towards the roo, the new goalkeeper made two terrific stops with its legs and tail before deciding enough was enough.

The star performer returned to the field shortly later, showing its electric pace while cutting past defenders like they were training cones.

The footage was captured on a live stream for Bar TV Sports.

Despite the kangaroo’s best attempt to steal the limelight, the match did reach a conclusion with Belconnen United defeating Canberra FC 2-0 to increase their lead on top of the ladder.