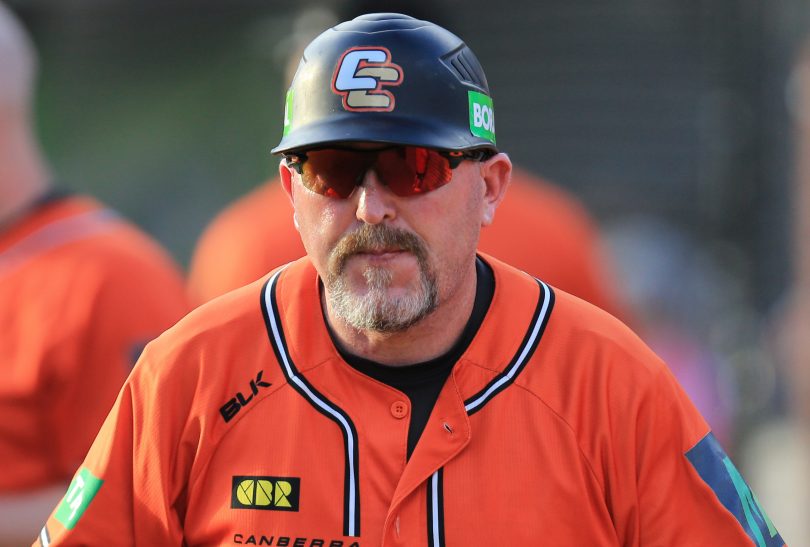 Keith Ward will take over the reins from championship manager Michael Collins for the upcoming season. Photo: SMPIMAGES.COM/ABL Media

The Canberra Cavalry have announced Keith Ward will take over as manager from Michael Collins for the upcoming season, with Collins to return to the club as Ward’s assistant.

The Cavalry announced Ward would lead their charge for a second ABL championship on Friday morning (7 September) with retired star pitcher Brian Grening and Felipe Blanco from the San Diego Padres to complete the coaching staff for the new season.

It will be the first time the Cavalry will start the season with a new manager since the opening day of 2012 when Michael Collins took over the lead role from Steve Schrenk and led the team to three ABL Championship Series appearances. The job will not be foreign to Ward, who has coached the Cavalry since its inaugural season in 2010 and stepped up as manager for the 2018 ABL Championship Series against the Brisbane Bandits.

Collins missed the decider due to his role as the Houston Astros bullpen catcher, which will also limit his time in Canberra during the 2018-19 ABL season.

Cavalry director Donn McMichael has faith in Ward to lead the team this season.

“Keith has been a coach with the Cavalry from day one and has certainly earned his opportunity to be the team’s manager, and is really looking forward to the challenge,” McMichael said.

Cavalry fans will also welcome back another familiar face in a new role as longtime Cavalry ace and the ABL All-Time Strikeout King Brian Grening will join the staff as pitching coach.

Grening was the 2018-19 ABL Pitcher of the Year, capping his season with a win in front of a capacity Canberra crowd in Game 1 of the ABLCS. Grening announced his retirement shortly after the season and was quickly approached by the team to take on the new role.

Cavalry Memberships and Single Game Tickets are now on sale for the 2018/19 ABL Season. Click here for more details.

Keith Prinn - 36 minutes ago
Queanbeyan needs this more than anything View
Alan Dalling - 5 hours ago
Jorge Garcia no it's not. Stage 2 will nearly double the commuting time between Woden and Civic. Will remove a couple of hund... View
astro2 - 21 hours ago
Yes, I read what you wrote. The mention of Hobart and Darwin is because, as far as I know, these two capital cities are the o... View
News 80

Bethany Williams - 42 minutes ago
Charlie McDonald agree! That’s why the Canberra Progressives are going to run lots of candidates at the Oct election (full... View
Jane Kim - 2 hours ago
You could not reach our expectations in a million years, Alistair! View
Benkin Manfish - 13 hours ago
That might even work, if there was any evidence that they could do an even half way decent job.... View
Opinion 24

UPDATED: The Bureau of Meteorology (BOM) has forecast possible large hail and severe thunderstorms across the ACT and southern region...
News 145

UPDATE: Thanks Canberra, the 15-month-old child has been located safe and well. The vehicle has been found and the man...
Lifestyle 0

It’s not easy to strike the balance between special occasion restaurant and beloved local eatery but under the guidance of...
News 16

@The_RiotACT @The_RiotACT
Discover The Plot at #Pialligo this Sunday and support bushfire recovery https://t.co/OgyMgD9OcH (4 hours ago)