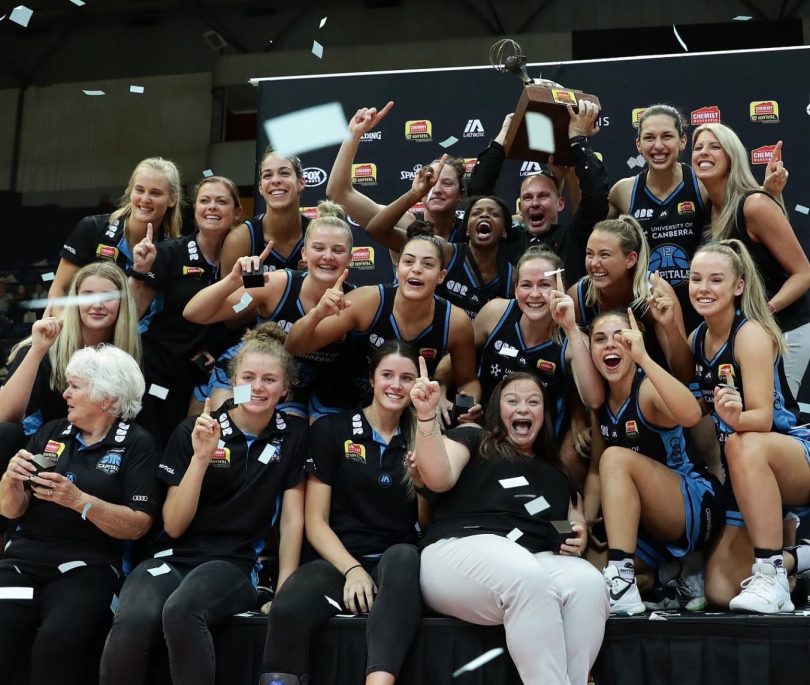 When the UC Capitals needed a bucket with the clock running down, reigning MVP Kia Nurse answered the call and the Caps went on to win a nail-bitter 71-68 over the Southside Flyers at AIS Arena on Wednesday night (4 March) to capture the franchise’s ninth WNBL title and back-to-back championships in the process.

With the game clock under 30 seconds and the Flyers up 68-67, Nurse capitalised on space afforded to her at the top of the three-point line and the Canadian import produced a dagger three-pointer with 21 seconds left to put the Caps up by two to help them claim the chip.

The third quarter proved to be a defining factor as the Caps amped up their defense to hold the Flyers to only nine points in that period of the game.

Point guard Olivia Epoupa was sensational for the Capitals during the two games of the finals series and her performances were recognised with the Rachael Sporn Grand Final MVP as she produced a masterclass in the fourth quarter to end game two with 16 points, seven rebounds and 11 assists.

Thank you, Canberra – we love this city. #GoBIG pic.twitter.com/BzD8aRjlIy

Marianna Tolo had another strong night for the back-to-back champs as she was not only able to get buckets inside, but her mid-range game made her a tough customer to deal with all night. The Australian Opal ended the match with 19 points to go along with 12 rebounds.

The Flyers will head home to Victoria ruing how they could not keep hold of a 16-point lead during the second quarter and by half time were shooting the threes at a fantastic 50 per cent rate, hitting six of their 12 attempts.

However, they did not manage to hit a single three-point shot in the second half and their percentage plummeted to 30 per cent.

Their failure to keep the series alive simply came down to not being able to replicate their very good first-half performance. Rebecca Cole had another great outing for the Flyers, but because of foul trouble after half time, she only managed to score four points between the third and fourth after racking up 19 in the first 20 minutes.

It seemed the energy had been sucked out of AIS Arena right away as the visitors got off to a fast start, led by Cole who had seven points on 3-4 field goals to guide the minor premiers to a first period 24-16 lead.

Rather than putting a stop to the Flyers early onslaught, the Capitals could not stop Cole in any way shape or form. The 27-year-old completely took over in quarter number two and went into the half-time break with 19 points on 72 per cent shooting from the field.

Whatever Paul Goriss said at half time sparked the Capitals right back into life and very quickly the faithful started to see glimpses of why they were reigning champions.

Congratulations to @OliviaEpoupa for taking out the Rachael Sporn Grand Final MVP after putting up 16 points, 7 rebounds and 11 assists tonight. #GoBIG #WNBL20 pic.twitter.com/4Z5h7m2X7F

Goriss’s team went on an amazing 15-0 run that commenced towards the end of the second quarter and spread into the third as the tie had completely flipped, thrilling the 4,481 spectators.

Before the Caps could kickstart their own formidable lead, Cheryl Chambers’ team managed to overcome that dark period to claw back in the second part of the third and that saw the Caps only lead 56-54 heading into the fourth.

The fourth quarter fit the narrative of what the final series between the two finalists over the two games had become as each possession counted for so much. With both teams trading buckets over the course of the quarter, the travellers had a one-point lead with over a minute to go. Caps forward Kelsey Griffin showed off a nice post move inside, but was unable to score and was then called for a foul trying to rebound her own miss as the Caps fans nervously looked on.

Griffin made up for that foul in the very next play as she locked down Mitchell before the guard coughed up the ball over the sideline, which would then set up one of the most clutch shots in WNBL finals history.

With the shot clock running down, Epoupa spotted Nurse behind the arc, who then drained the three-ball and let out an almighty roar with five seconds left to put the Caps up by two.

With Southside having fouls to give, it eventually sent Nurse to the free-throw line and although she missed the first and second attempts from the stripe, Tolo came up with a massive offensive rebound following the second shot to chew precious seconds off the clock and give the ball to Maddison Rocci, who drained one of two at the line to win the WNBL championship.

Are there any people in the Capitals winning team who were actually born and raised in Canberra?