NSW Roads and Maritime Services is currently in the midst of a safety review of the oft-maligned Kings Highway. As part of this they’ve taken comments through a rather nifty online mapping tool, and these have now been collated and summarised in a 33 page report. The report includes the complete collection of comments received, a fair number of which are whinges about ACT drivers. 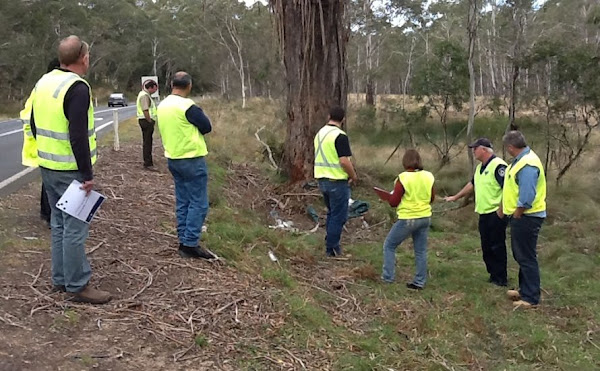 They’ve also sent out a deputation of serious men and women with serious clipboards to assess the road in person. The next step is a safety review report to be handed to the NSW Government in August – after that any further action is in the hands of the politicians.

They did this study with amazing speed. Lots of opportunities for people who lived along the highway to comment, and then blam, study released. Not bad!

It’s Idiocracy type stuff though to screech for money to be spent on a road just because people crash on it. People crash on the road because of the way they drive, not the road. As every second responder to the study seems to have said, a few visible police would be cheaper than idiot-proofing the road.

Barrell O’Farrell’s new fleet of speed cams might change things a bit too. Who wants to bet that some will find their way onto the King’s, and the Monaro?

It’s a feasibility study for the best trees to nail fluffy toys to.

I can’t look at this group of high-vis’d people without thinking of http://www.smh.com.au/technology/technology-news/when-photoshop-goes-wrong-floating-inspectors-cause-internet-stir-20120523-1z3zo.html

Capital Retro - 10 hours ago
I'm not interested in what the ACT government does with electricity because I don't use ActewAGL any more. View
phydeaux - 17 hours ago
Rather my point, JS9. “…without qualification”. With significantly different individual circumstances, to give an answe... View
Kathy Blunden - 18 hours ago
I was also totally shocked with my electricity bill. It is the highest bill I have ever received and I have solar panels!!!... View
News 7

Rob Quarmby - 10 hours ago
Most I’ve ever seen around my area this year hadn’t seen them for a long time before this... View
Daniel Palmer - 11 hours ago
Minus the fires, has me stumped why. View
The Garden, botanicus perfectus - 14 hours ago
Ann Gottaas View
Lifestyle 16

aussie2 - 15 hours ago
Here is another for the "shopping list". It is government responsibility to ensure its citizens have access to pools and othe... View
2902 - 18 hours ago
Imagine the money one could make building apartments on this site, right out the front of the proposed light rail track View
ChrisinTurner - 18 hours ago
There is not enough attention to maintaining services in areas with dense populations. The government seems to be working on... View
Opinion 75

Naimad Doowneerg - 15 hours ago
Bernard Miller not sure what you mean by "shear (sic) volume of adverse events and deaths". According to the TGA There have b... View
Garvin Francis - 16 hours ago
Nada Krstin So here’s totally what wrong with this whole anti vaxx, anti mask, anti lockdown argument. Its not about believ... View
Deborah Gale - 22 hours ago
Nada Krstin The vaccine gives protection and greatly reduce the likelihood of serious disease which is great. But children wh... View
Opinion 3

@the_riotact @The_RiotACT
A #pet is for life, not just lockdown. Zoya Patel makes the case for #ethically sourcing your pet and thinking beyond instant gratification https://t.co/3fviGAEOgn (9 minutes ago)