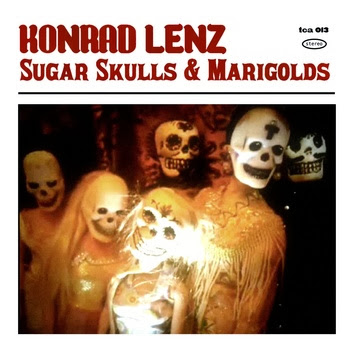 It used to be I got CDs in the mail, but it’s 2013 so I get bandcamp validation codes via facebook. (preferably email john@the-riotact.com, much more likely to be actioned)

Yesterday it came from Konrad Lenz.

This long term fixture in the local music is one of the most covered local songwriters by other performers. Famous for a shambling appearance that reeks of whiskey even when it doesn’t.

In recent years he’s been singing a lot of old blues songs, but with Sugar Skulls & Marigolds it’s all original.

Konrad is famous for his gravelly voice which evokes Leonard Cohen or Tom Waits.

If you don’t like Cohen or Waits then you’re unlikely to be thrilled with Lenz’ work.

But if you do like near spoken poetry with music carrying an emotional edge (anger, sorrow, or disappointment mostly) then this could be for you.

Most of the album is classic lonely Lenz (he can be more upbeat when band members drag him alone for the ride).

Back to Dust is unusually delicate. Readers familiar with Konrad’s work will be astonished to hear it’s even sadder than his usual work.

It sounded good on my iMac, but the production is fantastic on the big stereo rig, gorgeous use of space in the mix.

If you’re feeling sad, or angry, or disappointed… If you just want to remember what those emotions feel like, then this is some really solid music to put on.

If on the other hand you want to blast some K-Pop to paper over the howling anguish of your soul then maybe this isn’t for you.

You can have a listen for yourself now:

I love Konrad’s work. He’s one of Canberra’s real gems.

Bob Fraser - 34 minutes ago
Good on you Debbie, some sound advice at last amongst a lot of cringe-worthy comments. View
Geeta Datta - 1 hour ago
Kieran Angus Maybe, it's an EEG I'm thinking of. It's amazing how little they tell you about yourself lol. View
Julie Macklin - 2 hours ago
Nora PrestonPlease give the source of that graph. Without a source it’s worthless. View
News 40

Carly Maree - 44 minutes ago
I wonder if the people doing this use computers or phones? SMH. 🤦🏼‍♀️ View
Matthew Davies - 1 hour ago
Yvon Nemchinov sounds like you should talk to someone who has to watch people die of COVID who could have been saved. Freedom... View
Yvon Nemchinov - 1 hour ago
You should move to North Korea. Sound like you would love it there. I grew up in a place where people were prosecuted for tho... View
Opinion 1

Nick Swain - 1 hour ago
As well as potentially great public art the major attraction of this area to be maximised is its heritage. The ACT Heritage C... View
Opinion 6

John Moulis - 1 hour ago
The Australian basketball team in the 1972 Munich Olympics. I vaguely remember that game. Australia was playing the US dream... View
Jennifer Andrew - 2 hours ago
A lovely person always and a great contributor to sport in Canberra. View
Fiona McLean - 2 hours ago
Wait? Phil's hair was dark? Well I never… View
Opinion 219

Commuters have been warned to prepare for years of disruption on the southern gateway to the city as work ramps...
Opinion 220

Health Minister Rachel Stephen-Smith has told people travelling to the ACT for parliament to "keep yourself to yourself as much...
News 40

Stickers with QR codes that link users to non-COVID-related websites have been placed over some legitimate QR code check-ins in...
Community 39

@The_RiotACT @The_RiotACT
The old Capitol Theatre in Manuka will soon be coming down to make way for a new hotel and cinema complex after the project's second stage was approved https://t.co/hIOHgAvfi1 (2 hours ago)

@The_RiotACT @The_RiotACT
The Kingston Arts Precinct project needs a kick start to re-engage a community being kept in the dark, says Ian Bushnell https://t.co/2ltMgI3NWV (5 hours ago)