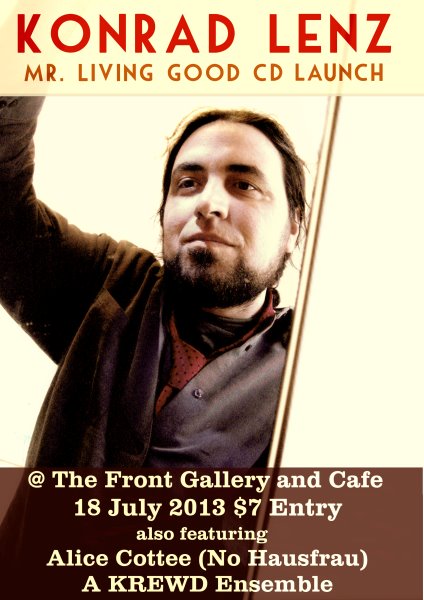 Canberra’s answer to Tom Waits, the living legend that is Konrad Lenz, is launching a new CD at The Front on 18 July.

Annie Wyer - 18 minutes ago
They do know about Myrtle Rust, don’t they? View
Community 19

Debra Tighe - 19 minutes ago
Dani Yell, neil said you found one the other day😊 View
Debra Tighe - 22 minutes ago
Megan Kulczycki maybe we could do this with Charlotte? View
Kellie Yarrow - 1 hour ago
We’ve seen some in Queanbeyan on our regular walks. View
News 1

gazmos - 38 minutes ago
A pity the ACT Government spent $1.5b on Light Rail rather than on health and education. Now we the residents are paying for... View
Lifestyle 3

Sandra Naden - 47 minutes ago
Lynne Mortimer , I think you may have a few more than this!! View
News 15

Futureproof - 1 hour ago
One of the nicest designs to come out of Japan. The sweeping lines could have come out of a Jaguar design studio, but unlike... View
James Forge - 2 hours ago
“Might not be anything special” At least it is low and sleek like cars should be.... View
Ed N Joanne Towner - 4 hours ago
Had one of these and it was an excellent vehicle and great to drive. View
Opinion 1

Futureproof - 1 hour ago
Barr and Rattenbury absolutely hate ICE vehicles, so I can't see this getting the light of day View
Lifestyle 3

Capital Retro - 1 hour ago
I concocted a nesting box almost exactly the same as the one depicted in the last image in this article and placed it in a Ne... View
Carolyn Drew - 2 hours ago
And even more trees will be cut down when the planned crematorium next to the Callum Brae Nature Reserve is built. Totally ir... View
Acton - 4 hours ago
Meanwhile the Greens, once an environmental party and elected on the basis of its false claims to protect Canberra's environm... View
Property 10

Matt Perry - 3 hours ago
Is it a plan to get the the whole state as public servants ? View
Alexei Gorbatov - 3 hours ago
Why we don’t hear that money go to strengthen our hospitals? View
show more show less
*Results are based on activity within last 7 days

@The_RiotACT @The_RiotACT
Sticks, twigs and thread from people's washing lines might be easy enough to source, but tree hollows are the increasingly rare gems of the bird property market https://t.co/Tak0XGIPKz (22 minutes ago)