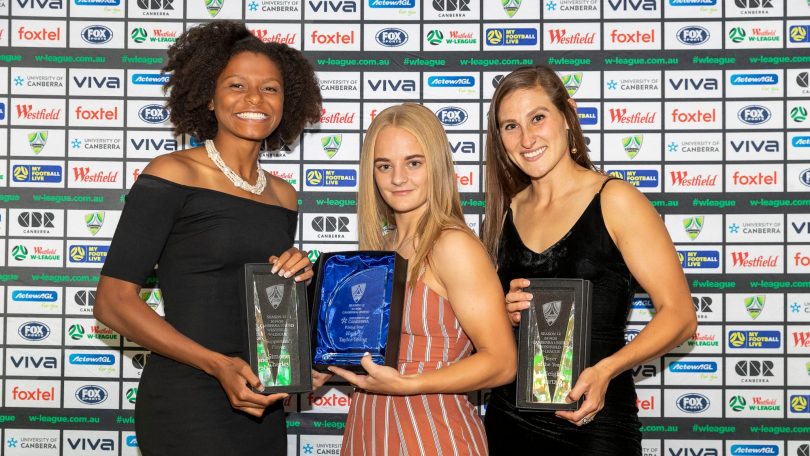 American imports have cleaned up at Canberra United’s annual awards night with defender Kaleigh Kurtz taking home the top gong for the 2019/20 Player of the Year.

Kurtz managed to play every game in United’s 2019/20 campaign, racking up 69 clearances, 28 interceptions, 13 blocks, one assist and a broken nose.

Her American counterpart, Simone Charley – who joined United this year on a one-season loan agreement from Portland Thorns – was named the Supporters’ Player of the Year after she scored five of the team’s 13 goals this season.

Charley was the team’s leading goal scorer, and was in contention for the W-League golden boot at the top end of the season, but ended up finishing equal fifth, two goals behind leader Natasha Dowie.

There were plenty of highs and lows in our 2019/20 Westfield W-League season but what is your favourite memory? Here are a few of our highlights! #GoGreen

Her consistent effort also saw her rank 7th in the W-League’s list for chances created this season, notching up 22 in her 11 games.

W-League veteran Leena Khamis also had her efforts rewarded, taking home the Players’ Player award from her teammates after wearing the captain’s armband against Brisbane in what could be the last W-League game of her career.

Khamis, who is yet to make a decision on retirement, scored two goals and assisted two others in the 12 games she played this season.

We just want to take a moment to celebrate the phenomenal @WLeague career of Leena Khamis!

We are so honoured that we had the chance to be a part of your incredible journey! ? #GoGreen pic.twitter.com/tYAgTE7oIa

Hayley Taylor-Young, who made her W-League debut this season back in November, was bestowed the Rising Start Award for an impressive first season.

The debutant got her first run in the top league when she was just 17-years-old. Despite her age, she managed to play seven games for United, scoring the winner – and her maiden W-League goal – against Adelaide back in round six.

Jackson Tippett’s enthusiasm saw him pick up the 2019/20 Volunteer of the Year award.