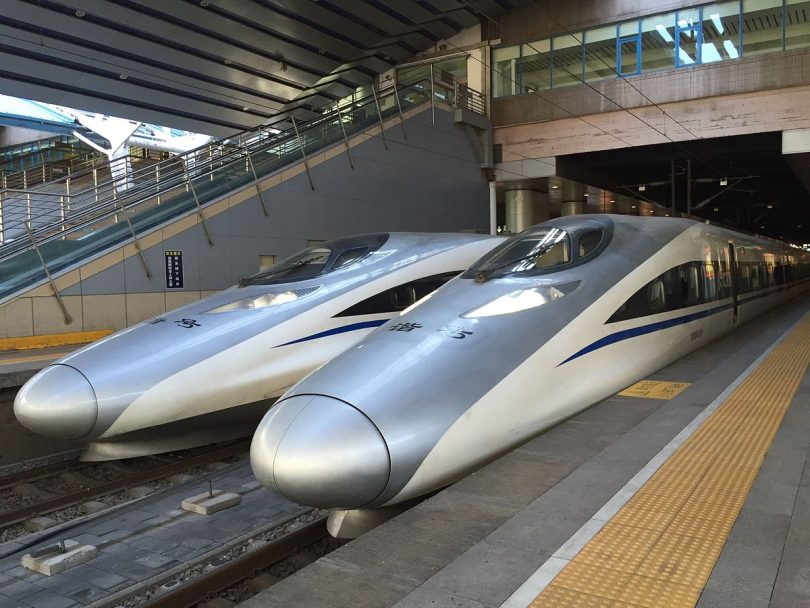 Labor has put high-speed rail back on the election agenda with a $1 billion pledge to begin securing the corridor for a link from Brisbane to Melbourne via Sydney and Canberra.

Transport and infrastructure spokesperson Anthony Albanese says a Shorten Labor Government will create a High-Speed Rail Authority that will work with the governments of Queensland, New South Wales, Victoria and the Australian Capital Territory to finalise track alignment and commence land acquisitions.

It will also finalise an updated business case for the project in consultation with Infrastructure Australia and work with the private sector including international proponents with experience in building and operating high-speed rail.

The former Labor government completed a feasibility study for the project in 2013, which identified a 1748km route and found the project was not only viable, but would return more than $2 in public benefit for every dollar invested, according to Mr Albanese.

He said an independent panel including former deputy prime minister Tim Fischer and the Business Council of Australia’s Jennifer Westacott recommended the creation of a High Speed Rail Authority but subsequent Coalition governments failed to act on this.

Mr Albanese said high-speed rail would revolutionise interstate travel and regional development in Australia, allowing passengers to move between capital cities in as little as three hours at speeds of up to 350km/h.

The project would also be an economic game-changer for communities along its path, including the Gold Coast, Grafton, Coffs Harbour, Port Macquarie, Newcastle, the Central Coast, Southern Highlands, Canberra, Wagga Wagga and Shepparton. 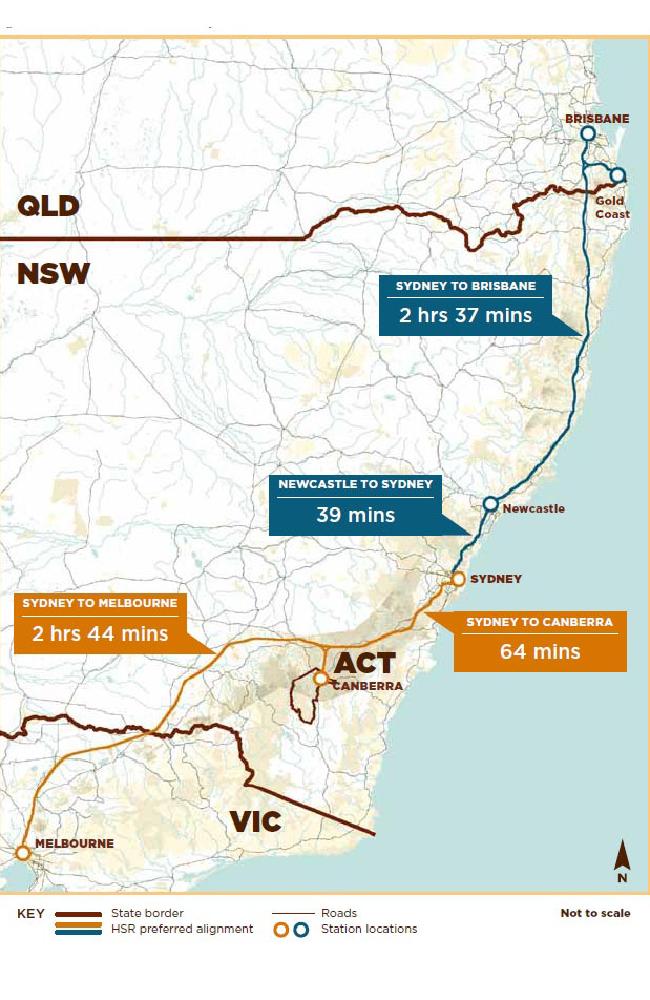 “It would bring these communities closer to capital cities, allowing for increased commuting while also strengthening the case for regional business investment,” Mr Albanese said.

“As Australia’s strong population growth continues in coming years, the already established case for high-speed rail will become more compelling. If we start to acquire the corridor now, we will protect it from development and thereby minimise costs.

“Indeed, in 2017 Infrastructure Australia calculated that early acquisition of the corridors for seven rail projects on its Infrastructure Priority List, including high-speed Rail, would save the public $11 billion in land acquisition and construction costs.”

Route maps so far for high-speed rail proposals show a station to the north of Canberra with a spur line to the capital. Canberra Airport also has proposed a station there to create an integrated transport hub.

A land value capture model for property development has been proposed as a way to finance the expected $100 billion project but it will still need significant government support.

A private consortium Consolidated Land and Rail Australia (CLARA) – which includes Japanese company Hitachi, infrastructure services company Cardno and the CSIRO – plans to use the land value capture model along the route to fund and build eight inland ‘smart’ cities in conjunction with a high-speed rail network connecting Sydney and Melbourne via Canberra.

CLARA believes the 35-year eight cities project can deliver critical mass in passenger numbers for the HSR network, as well as unlock the significant financial benefits to the Australian economy of inland city development.

It says it is agnostic about technology and will choose the best on offer if its proposal is accepted. CLARA says research shows that there are at least four viable, currently available technologies that would enable CLARA to achieve its faster rail projections, including magnetic levitation and traditional systems.

CLARA’s proposal has three distinct stages which it says are commercially viable in their own right. The first two to be built concurrently are Melbourne to Greater Shepparton with two CLARA cities and then Sydney to Canberra with three CLARA cities.

But the Greens in their policy for high-speed rail say the project should be totally publicly funded and not handed over to property developers.

Could we at least start with a FASTER rail service, say 3 hours to Sydney?

One billion dollars should cover some consultancy fees, a sexy logo and a nicely bound report.

What’s the betting they try to emulate the Andrew Barr housing model? Picture cheap high-rise apartments adjoining sheep paddocks all the way along the rail route!

How many years and how many government's have promised this. A waste of money

Ok they say this every time an election happens.. but hopefully some thing will actually eventuate.

Counterfeit Bill is at it again. How little credence can be given to him and his little band of traitors and would be's.

Labor had the opportunity to build it under Rudd and Gillard. Instead they wasted money on things like Pink Batts and school halls. John Howard built the Alice Springs to Darwin railway. Labor built nothing.

Yass is in a swing seat. Canberra is Labor. That’s why we are being bypassed.

How many times is this now? Every election'this gets dusted off. Let's spend the money actually building one, say between Melbourne & Geology......

A billion for this is peanuts towards it if our new Gungahlin express train cost a billion.

Jim Hosie the money is only to acquire land on the path. Most likely never too be used for the fast train

Bet it gets built by China

Where is the money tree forest being planted? Get your hand off of it!

Another billion. And still not saying who they will be targeting to finance yet another beer coaster idea. Most financially incompetent political party in our short Australian history.

Susy Pocknee , yep, better off chartering helicopters to get around in like the other mob. Most financially incompetent parties are LNP, Palmer and Dumb Nation.

We need water more than we need a non-viable fast train. The Welcome Reef Dam was scuttled by Labor’s Bob Carr after the Greens had demanded no more dams be built in NSW.

As it turns out, Sydney is now getting large amounts of water pumped from the Shoalhaven River to supplement the rapidly dropping Warragamba Dam. The NSW government has already bought up all the land that the proposed dam was to cover and apart from the area now being declared a national park there is no other impediment (except the Greens) to stop this project proceeding and it is urgently needed.

The point I am making is that land is bought up for the corridor for a fast train will become a stranded asset as the Greens will stop the project at some stage.

bj_ACT - 4 hours ago
It was always a bit funny when Turner residents were complaining about extra buses when whole swathes of suburbs lost their b... View
chewy14 - 4 hours ago
Honestly, is there anything more NIMBY than worrying about the "city coming for their neighbourhood" in an area less than 1km... View
HSewell - 5 hours ago
Good result View
Opinion 4

Heavs - 6 hours ago
This just in - Government is not responsible for handling advertising and marketing for private developer. More news at 6.... View
News 2

Karen Feng - 8 hours ago
is this an indication that we do not have enough land fornthe wildlife to thrive? theres this road from holt to Fyshwick that... View
News 3

A_Cog - 16 hours ago
Should the ACT get its own police force? NO! It'd be run just as badly as every other ACT Govt service. Instead of buying ser... View
News 18

wildturkeycanoe - 17 hours ago
I'm still waiting for surgery, almost up to my "expected" 365 days on the Category 3 list. This is after initially waiting fo... View
HiddenDragon - 20 hours ago
This year's Annual Rates Assessment Notices tell ratepayers that 31% of rates payments go towards funding the health system -... View
Opinion 110

chewy14 - 18 hours ago
Russianafroman, I go from being called a right wing nut job to a Socialist Comrade in the space of a few stories these days.... View
russianafroman - 21 hours ago
Capital Retro I don't watch or listen to the ABC. But it wouldn't surprise me. View
ACT Election 115

Reno Minopoli - 20 hours ago
Clinton Berry which part of "Three decades’ population growth "needed" do you not understand? Kids that grow up replace tho... View
Capital Retro - 21 hours ago
Well, I can't speak for everyone but I have certainly always "paid my own way". In the early days of SMSFs the deductibility... View
ssek - 21 hours ago
The greens and pretty good economic plan are an oxymoron. View
Property 1

Capital Retro - 21 hours ago
Coffs Harbour has The Big Banana, Tamworth has The Big Guitar, Canberra will have The Big Battery. View
News 47

@The_RiotACT @The_RiotACT
The investigation into religious sect Twelve Tribes, that lives in Bigga, two hours north of Canberra, will likely continue until the end of 2020 or early next year https://t.co/rYk3gTVr8o (22 minutes ago)

@The_RiotACT @The_RiotACT
Canberra’s Catherine Dooley has just reached an astounding milestone, notching up 800 games for Central Hockey Club - at the age of 67 https://t.co/FOSQ3jYmAD (2 hours ago)

@The_RiotACT @The_RiotACT
A national self-harm monitoring website is being established by the Australian Institute of Health and Welfare to provide greater insight into suicide attempts, suicidal ideation and self-injury, and the possible impact of COVID-19 https://t.co/gfvE3ohsuj (3 hours ago)