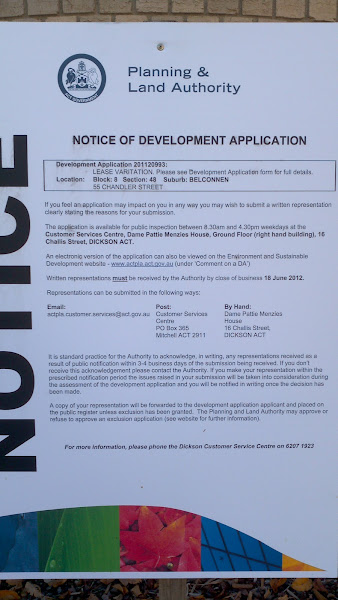 Apart from the appalling spelling it is difficult to work out what the varitation is.

Would it be so hard to put the details on the sign along with the paragraphs and paragraphs of legal guuph?

If you were to go to the website you will see what is so hard about putting the details on a board like this. If your too lazy to see then will give you a hint. All these applications have pages of details, so not practical.

But do like the idea of having a QR code though just to make it that much easier.

Lease variation to remove provision requiring that: “…the lessee will at all times permit members of the public access to pass and repass along the land shown on the deposited plan No.6734…”.

For those playing at home… http://www.actpla.act.gov.au/topics/your_say/comment/pubnote?sq_content_src=%2BdXJsPWh0dHAlM0ElMkYlMkZhcHBzLmFjdHBsYS5hY3QuZ292LmF1JTJGcHVibm90ZSUyRnB1Ym5vdGVEZXRhaWxfbmV3LmFzcCUzRkRBX25vJTNEMjAxMTIwOTkzJmFsbD0x

It appears that the Labor Club wishes to close the public laneway that is on the block for safety reasons.

However, the laneway is considered underutilised and in its current state presents a significant safety concern. A lack of passive surveillance provided by adjacent buildings adds to this unsafe environment. The laneway is uninviting due to a lack of sunlight and landscaping, and presents a hazard to the community. It is also poorly lit at night.

It’s the laneway that runs down beside the club building to the rear carpark.

Perhaps they could put a QR code that points to the web-site.

The site is Block 8, located on the corner of Chandler Street and Cameron Avenue. It incorporates a small parcel of land allocated for a public access laneway (refer Figure 1). The laneway is approximately 3m wide and allows pedestrian movement between the adjacent public car park (Block 6 Section 48) and Chandler Street.

The current lease for Block 8 Section 48 Belconnen has a provision requiring that:

However, the laneway is considered underutilised and in its current state presents a significant safety concern. A lack of passive surveillance provided by adjacent buildings adds to this unsafe environment. The laneway is uninviting due to a lack of sunlight and landscaping, and presents a hazard to the community. It is also poorly lit at night.

The loss of employment based in Cameron Offices also reduces the need for this laneway. Finally, it is understood that redevelopment of Block 6 Section 48 will further reduce the role of the laneway as a public thoroughfare.

The lessee wishes to close off the laneway at either end in order to efficiently utilise the adjacent blocks (Block 9 and Block 13 Section 48), which are all held in common ownership. These uses would include increase area for external smoking zone associated with the Labor Club and other office uses.

Glad itsjust not me. There is one of these on the windows of the shops near the back of the carwash and Rainbow Cottege in Belconnen too. Even when you look up the details on ACTPLA’s website, it is near impossible to work out what in fat they are seeking to do. So much for public consultation.

Eric Anthony Lucas - 30 minutes ago
Why would anyone want to be a landlord? If you think it is hard to find rental accomodation now, proposals like this will onl... View
Zach Byrnes - 34 minutes ago
Nicholas Nagel thoughts? 🤔... View
Gavin Mcmullan - 56 minutes ago
Man, landlords are the whiniest people in Canberra. Change my mind View
Community 11

Perry Alopex - 1 hour ago
Nice! I can only imagine that trying to settle in Canberra would be pretty rough. It's got one of the highest costs for livin... View
Peter Manna - 1 hour ago
They will think this is paradise lol View
Amie Doolan - 2 hours ago
Where have these 50 people been housed? Are there local families taking them in, are they living in hotels or have they been... View
News 48

After the hail storm: An opportune time to look at car leasing

A structural perspective on buying an apartment

@The_RiotACT @The_RiotACT
Despite having it's #funding withdrawn in June 2021 and subsequently closing down, ACT Recovery College has received a prestigious Australasian #award among unwavering #community support https://t.co/Ptc8c8L0GE (9 minutes ago)

@The_RiotACT @The_RiotACT
ACT Health has reported 17 new cases of COVID-19. There are 17 people in hospital with COVID, including nine in intensive care https://t.co/1Bc2I9mRsp (17 minutes ago)