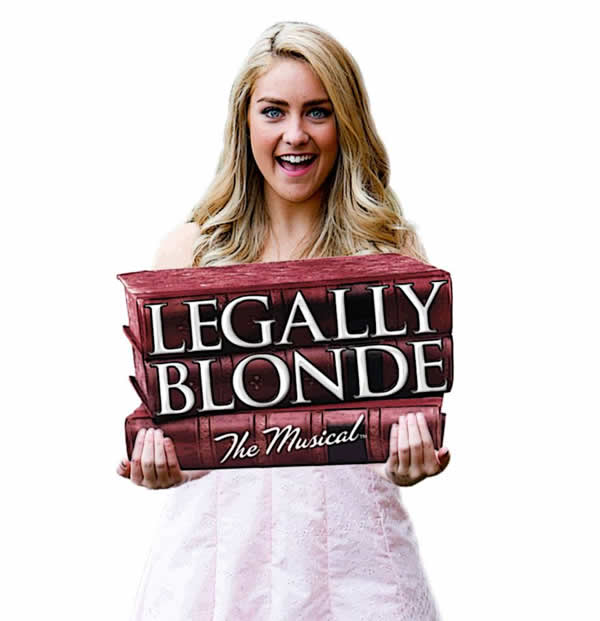 Anne Somes and Chris Neal (with Derek Walker as director) deliver a fresh, fun show with Legally Blonde. Elle Woods is a dumped by her boyfriend and that begins her epic campaign to win him back by following him to Harvard Law School. Hey, we’ve all done stupider things for love.

Mikayla Williams is nothing short of spectacular as Elle. Williams is a true triple threat who sings, dances and acts with equal power. Elle isn’t a bimbo who “becomes” smart (as in Born Yesterday): the message here is that Elle’s strengths have always been part of her, even if some people cannot see them beneath her peppy, red bull-fuelled bubbliness. Early on she dismantles a retailer’s testimony about a dress with sharpness and insight, and from that moment on we know that she is a born lawyer. The role could easily be played as a burlesque or parody but Williams is careful to keep the character grounded and the show is stronger for it. That said, at moments she has a wild-eyed gleeful look to her eyes that few could match. Throughout the play people try to change her (even would-be boyfriend Emmet, played by Dave Evans, takes a turn at playing Pygmalion with her) and a lot of the play deals with her struggle to succeed without compromising her identity.

The show is also blessed with possibly the best ensemble I have seen in a musical. The female “Greek chorus” (who take on a variety of roles throughout the show) understand that when the singing and dancing starts that does not mean the acting should be switched off. The chorus are excellently choreographed and are supported with a spectacular number of costume changes. There was an attention to detail in direction that made ensemble numbers deeply engaging to watch. Jenna Roberts and David Cannell also provide comic highlights throughout the show with strong character acting.

The only place where the show sags is in the love story between Elle and Emmet. Emmet is consistently nice and gentle but there is no true fire in their relationship. They go through the motions in their love songs (which are at least well sung) but there is no longing, no need beneath it. Elle is more passionate about her hair than she is about him, but we are expected to believe that she falls in love with him. We already know from how she reacts to being dumped by her boyfriend that Elle loves with a fiery madness – there was none of that in her interactions with Emmet. At best they are friends who support each other because they’re outsiders. Making them into lovers will require more chemistry between the two actors.

And unfortunately while the show is beautifully sung there are the standard technical issues we virtually always see in Canberra musical theatre. The music is over-amped to the point where it isn’t always clear who is singing what and there is a gentle staccato of intermittent glitches. I enjoyed the music a lot but more sensitive listeners will have some problems. The cast is doing its job, they deserve better technical support so the audience can properly enjoy their work.

I loved the show. It’s a strong, fresh musical well-performed. Mikayla Williams is a phenomenal talent and she’s supported by an excellent ensemble. This is a big budget production and the extra investment can be seen everywhere in the show. I’m a little dizzy thinking of the number of costume changes the ensemble go through in this show, the wings must be a flurry of performers scrambling after hot pants and trying to find their missing shoe. The cost of the high production values is a higher than normal ticket price. This is a show that deserves to be seen – hopefully there’s enough of an audience out there to support it.

And yes, there are dogs in the play, and one of them does tricks.

I saw this on the weekend and it is fabulous! And I don’t even like musicals that much. The dancing is amazing and so much energy – there is colour and movement the whole time, and a proper storyline as well.

This is one of the best local things I’ve seen in a while. It is expensive but there are a couple of cheaper matinees and Sunday night shows.

Julie Macklin - 9 hours ago
Fortunately the long grass looks prettily scenic, until they do get to mow it. View
Tom McDonald - 9 hours ago
Correct. Same complaints year after year. View
Nathan Horton - 10 hours ago
Julie Macklin they have known for 3 months it is going to be a wet spring and summer. Yet chose not to be proactive and prepa... View
Community 4

ssek - 18 hours ago
Give it time and the greens will have all kinds of legislation around halloween to prevent children having fun. View
News 1

ssek - 18 hours ago
These marine parks are ridiculous. Stopping a few people with a rod and fishing line from catching a couple of fish does not... View
Opinion 5

Capital Retro - 19 hours ago
I don't agree with a few of your claims. I am a senior person and at no time in my life have I ever heard of house ownership... View
Motoring 10

oh_ - 19 hours ago
As much as the noise, disruption and burnout smoke is trying for nearby residents, it does bring money and something differen... View
Rob Thomas - 1 day ago
Floriade? View
Tim White - 1 day ago
David Perkins you do know that it created jobs and brought millions into our local economy and in some cases kept many small... View
News 7

Chris Hobbs - 21 hours ago
Will ACT residents benefit from 30% canopy cover by 2045 from a massive tree investment, yes! Will we need to remove some old... View
Alice Paris - 21 hours ago
I dont think you understand what is happening here Chris. The Greens and Labor are responsible for the removal of so many mat... View
Bill Gemmell - 22 hours ago
Alice Paris I think people need to talk to their MLAs and let them know how the feel about various issues. I certainly will b... View
Food & Wine 32

Tim Hutch - 1 day ago
The best way not to give them your money is to do the speed limit. It's really not that hard. View
show more show less
*Results are based on activity within last 7 days

ACT Policing has a blunt warning for e-scooter users: be an idiot and you will face the consequences. With e-scooters...
News 83

Leadfoot drivers beware - the ACT's speed detection net is about to be widened with the addition of two new...
News 83

@The_RiotACT @The_RiotACT
The election's over and it's time for some fun. Our poll this week asks if we should celebrate Halloween or if it's commercialised nonsense https://t.co/JvbB9hOhZp (9 hours ago)

@The_RiotACT @The_RiotACT
There's plenty happening in Canberra over the coming week. Here are ten great things to do in the next seven days https://t.co/u9dwGfwghO (10 hours ago)