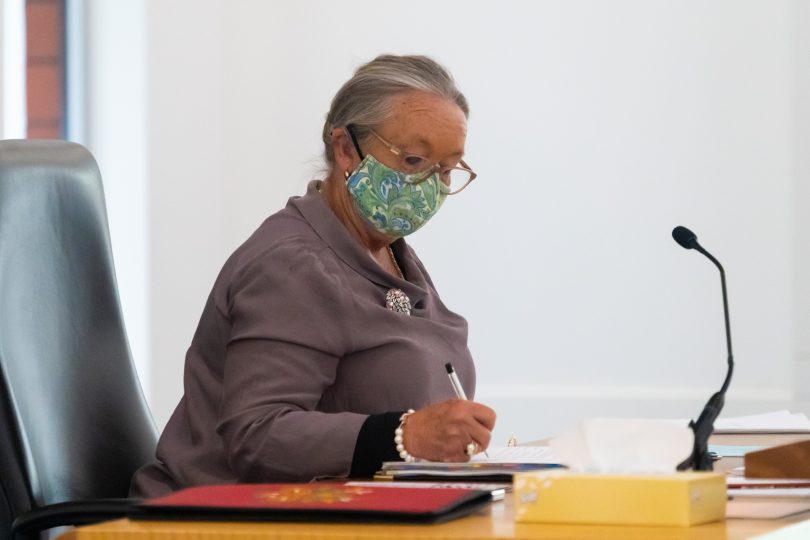 Speaker Joy Burch told the Legislative Assembly this morning she is considering taking legal action in the Supreme Court, labelling the Prohibition Notice as “entirely without merit”. Photo: Region.

UPDATED 1:30 pm: The Speaker of the Assembly is seeking legal advice following the issuing of a WorkSafe ACT prohibition notice which has stopped estimates hearings from going ahead as scheduled.

The ACT’s workplace safety regulator has banned in-person hearings or committee meetings at the ACT Legislative Assembly due to a failure to comply with safety protocols, including a COVID-19 risk assessment.

Chief Minister and Treasurer Andrew Barr was due to be the first government minister to face scrutiny at estimates this morning.

Speaker Jo Burch said she is now exploring legal action in the Supreme Court due to what she perceived as “fundamental constitutional issues” relating to the notice as it blocked the legislative arm of the government from “its powers of inquiry”.

“This is unprecedented,” she said.

It’s understood there had been some back and forth between committee chair James Milligan and the Manager of Government Executive Business Mick Gentleman regarding arrangements for the hearings and whether they would be hybrid or entirely in-person.

Mr Gentleman expressed concerns about the hearings being held in person.

Ms Burch said the notice had been issued following a disagreement between a government minister and the select committee on estimates about whether ministers and officials should attend hearings remotely or in person.

“I understand that it was against this background and acting on a complaint, work safety inspectors were dispatched to the Assembly precincts and the prohibition order was subsequently issued by WorkSafe,” Ms Burch told the Assembly.

A spokesperson for the ACT Government confirmed it had sought WorkSafe’s advice was sought about in-person hearings.

They said concerns had been raised about having a large number of senior public servants gathered for prolonged periods in confined spaces.

“The Government has always acted to protect the public service and ensure the community has access to the government services it needs,” they said.

The Speaker has written to Work Health and Safety Commissioner Jacqueline Aguis to argue that issuing the notice was “entirely without merit” and that this was a matter of “deep constitutional significance”.

Ms Burch said the terms of the notice represented a grave threat to the privileges of the Assembly, which could amount to contempt.

“The action taken by you cuts directly across the separation of powers between the legislative and executive arms of government and, on its face, seeks to upend the exclusive cognisance of the Assembly to exercise control over its proceedings,” Ms Burch wrote to Ms Agius.

“Neither the general power of inquiry nor committees’ powers under standing orders can be displaced by your exercise of powers under the Work Health and Safety Act.

“Setting aside issues relating to parliamentary privilege and the appropriate separation of powers, there are a number of technical and merits issues that arise in connection with the way in which the relevant powers under the WHS Act have been exercised and the terms of the notice itself.

“While the WHS commissioner fulfills important regulatory functions, these functions do not take precedence over the effective performance of the Assembly’s legislative, representative and accountability functions.”

Ms Burch said she would be “duty bound” to consider taking action in the Supreme Court if the notice was not withdrawn this morning.

It has not yet been lifted. 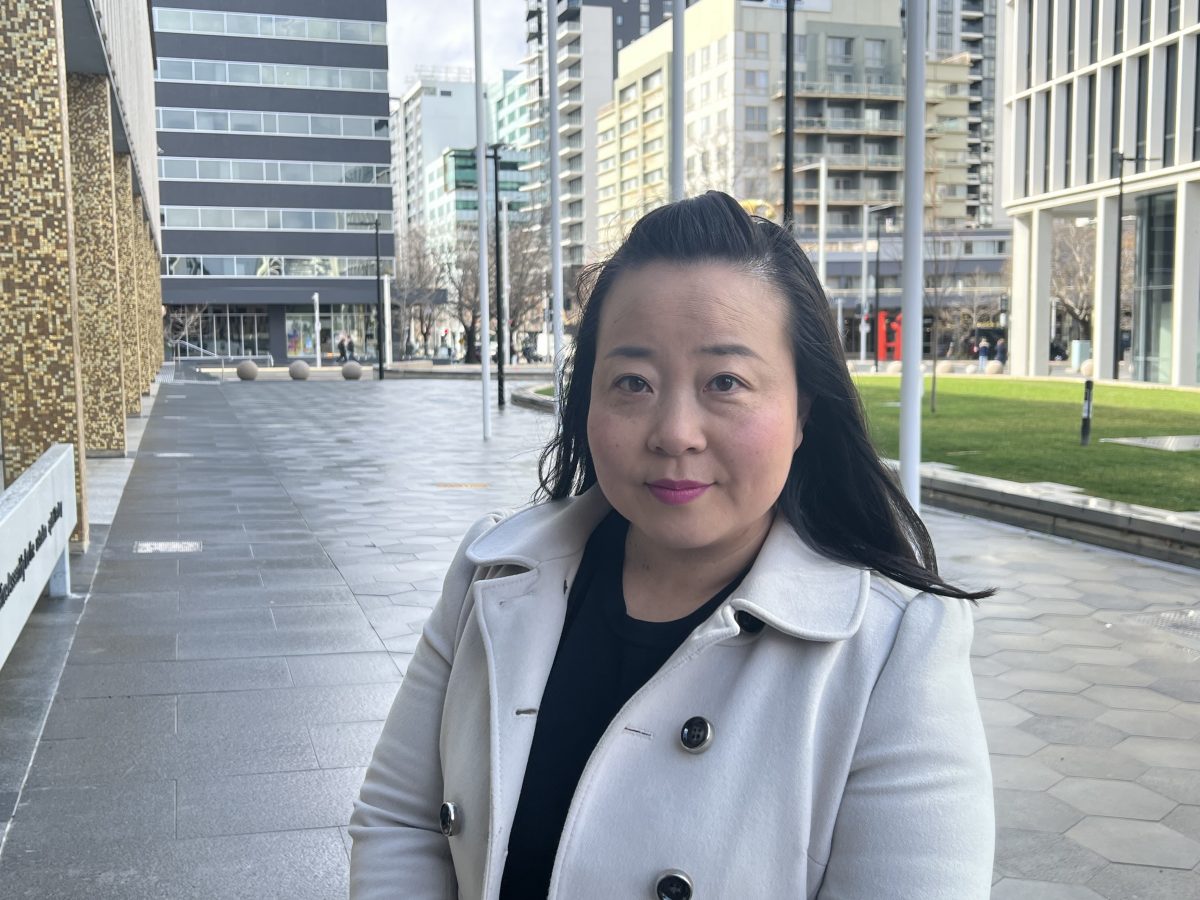 Opposition Leader Elizabeth Lee said members of the Assembly had been left “aghast” by the “extraordinary” issuing of the notice.

She said it was concerning that it had happened following a complaint made by a government minister and questioned what it meant for the separation of powers.

“It absolutely has an impact on the very important business of parliament,” Ms Lee said.

“In Australia, we are well served by a democratic system that firmly protects the separation of powers and when you see this kind of thing happening, it raises huge, huge alarm bells.

“The fact that the Speaker … will be seeking legal advice about potential supreme court action just says all you need to know.”

Estimates are expected to recommence on Wednesday (17 August) with today and tomorrow’s hearings anticipated to be pushed back by two weeks. 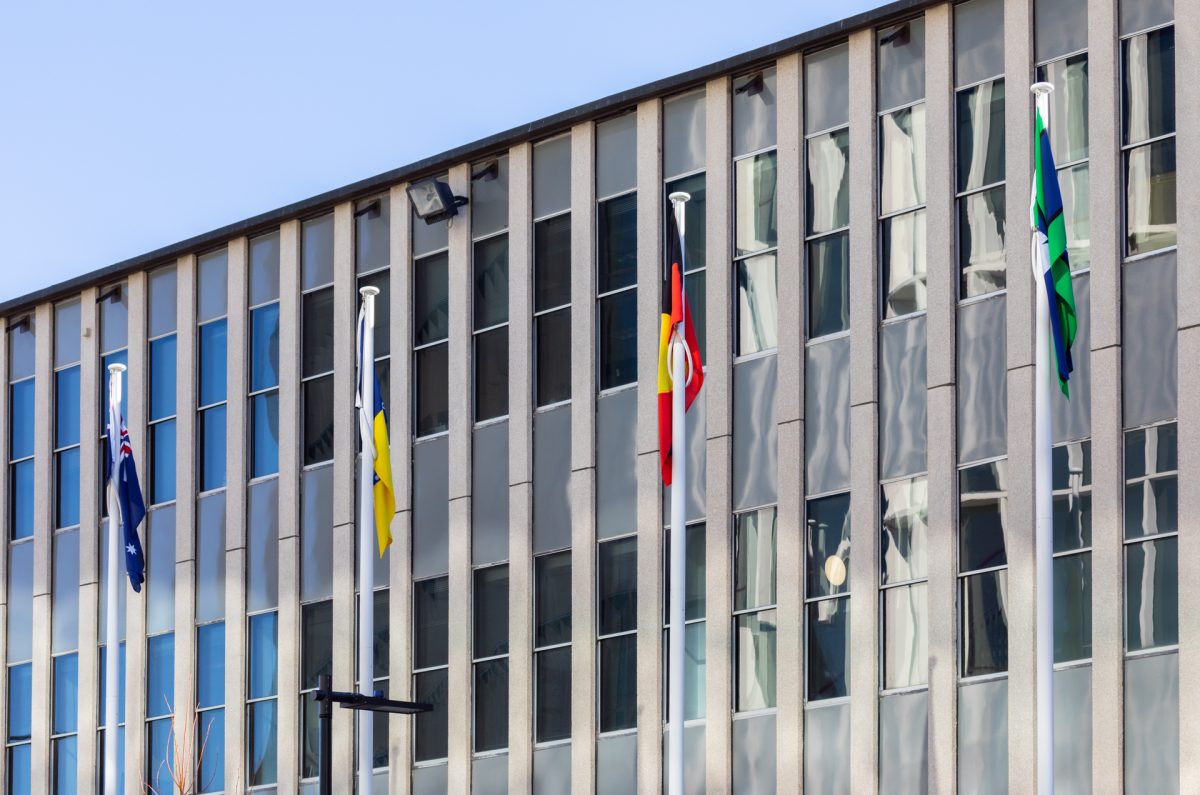 The ACT Legislative Assembly has been slapped with a Prohibition Notice from WorkSafe ACT as it didn’t consult with workers about COVID-19 safety. Photo: Michelle Kroll.

10 am: The Territory’s workplace safety regulator has issued the ACT Legislative Assembly a Prohibition Notice for failing to make it a COVID-safe workplace.

WorkSafe ACT’s notice, which is pinned to the front doors of the building, has banned any hearings and committee meetings from going ahead in person until adequate safety measures are put in place.

The notice has been served on Speaker Joy Burch.

Two weeks of estimates hearings – where the Opposition and crossbench have the opportunity to question the government on Budget spending – began with a community and industry group hearing last Friday (12 August).

Those were held as in-person and virtual hearings.

They were scheduled to begin formally today with Chief Minister and Treasurer Andrew Barr the first government minister to face scrutiny.

Whether or not that will happen is now uncertain. 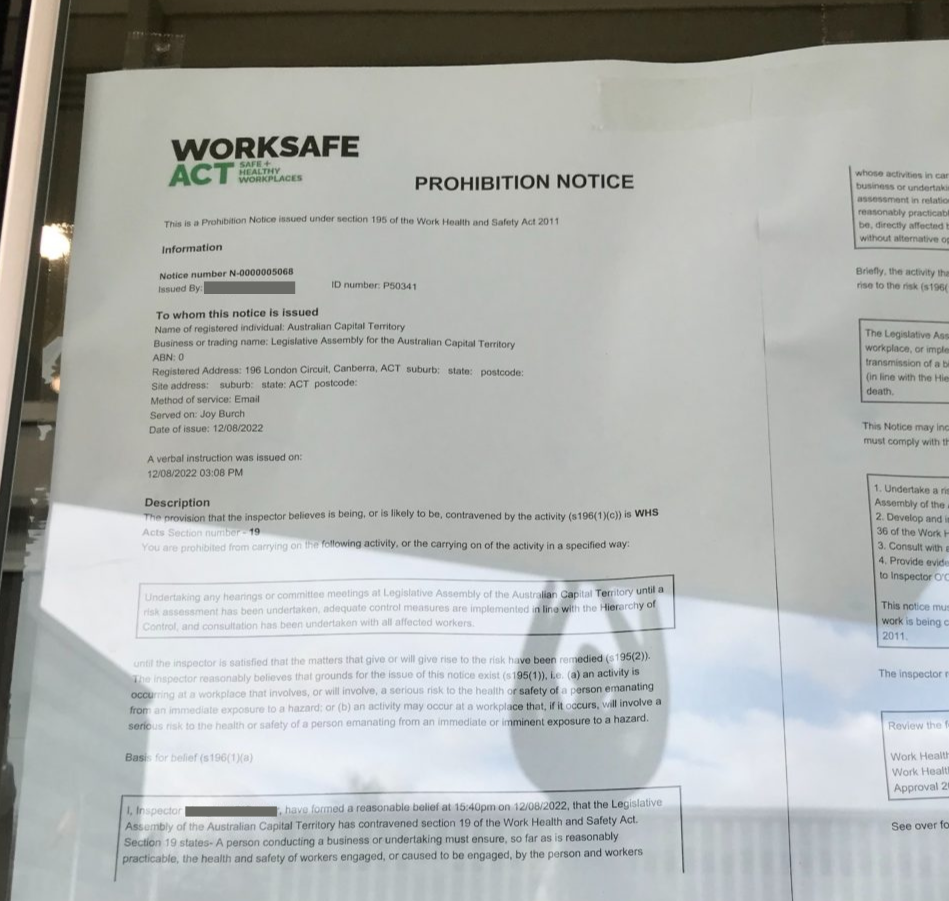 The Prohibition Notice is now on display on the front doors of the ACT Legislative Assembly. Photo: Lottie Twyford.

According to the notice, the Select Committee on Estimates 2022-23 did not undertake an assessment in relation to the activity and had not consulted with workers.

“Workers have been directed to attend this planned activity face-to-face only, without alternative options being provided that are readily available to control and eliminate the risk,” the notice read.

That risk is the transmission of COVID-19.

Mask-wearing is not mandated in the Assembly, but it is strongly encouraged.

Hearings and committee meetings are now unable to go ahead until the Legislative Assembly complies with multiple directions issued by WorkSafe ACT.

That includes undertaking a risk assessment in relation to face-to-face hearings or committee meetings, developing and implementing adequate control measures and consulting with workers who are directly affected by the in-person hearings.

Speaker Joy Burch, Estimates Committee Chair James Milligan and WorkSafe ACT have been contacted for comment on the matter.

Mr Barr is expected to survive the motion as the Greens will not support it.

The union being the union throwing their weight around because they can. Why couldn’t Joy put her thinking cap on and come up with a work-around! And the best the irrelevant Elizabeth Lee and her party can come up with is sitting on the sidelines looking confused! It’s all happenin in Canberra!

The coverage of this storm in a fair-trade artisanal keepcup, aired a short time ago on the local ABC TV news, was pure comedy gold, all delivered with an admirably straight-face.

The tale unfolded as a mixture of Wile E. Coyote meets Basil Fawlty meets Jim Hacker, with a dash of Malcolm Tucker thrown in for good measure – hilarious, until you remember who is paying for this circus and then reflect on the fact that it would make little difference to the lives of many Canberrans if the prohibition notice was made permanent. 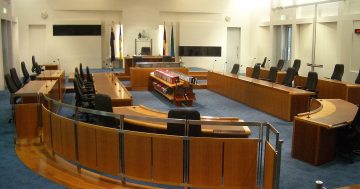 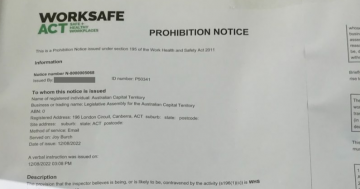