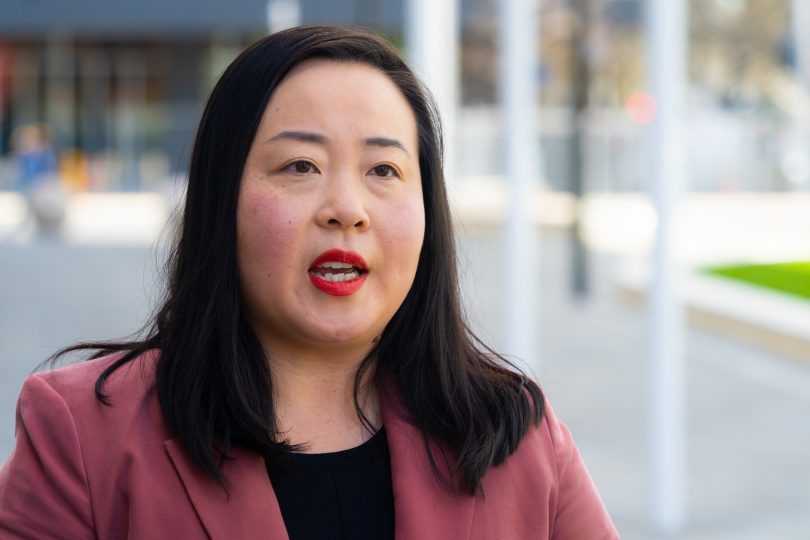 Opposition Leader Elizabeth Lee: “The Chief Minister is not taking the integrity of his government seriously.” Photo: Region Media.

The Canberra Liberals will continue to push for an audit of procurement decisions over the past five years in the Legislative Assembly today (24 March).

The motion will come after the ACT Government rejected calls for an audit, prompted by the Auditor-General’s damning report on the Campbell Primary School upgrade which found the procurement process lacked probity and tenderers were not dealt with fairly, impartially and consistently.

Despite Canberra firm Manteena being selected in 2020 as the preferred tender, the recommendation was overruled and the contract went to multi-national Lendlease.

Canberra Liberals Leader Elizabeth Lee said the ACT Integrity Commissioner Michael Adams had also publicly stated that the probity problems identified by the Auditor-General are “likely to be endemic”.

Mr Adams is weighing whether to launch a formal investigation into the Campbell Primary project and has called on industry members to come forward with any suspicions of improper conduct in the awarding of government contracts.

“The Chief Minister is not taking the integrity of his government seriously and is not treating Canberrans with the respect they deserve when it comes to spending their money,” Ms Lee said.

“It is clear there is a culture of secrecy that surrounds this Labor-Greens Government and the biggest question arising from all of this is how widespread are these issues.”

During recent annual reports hearings, Ms Lee said it was astounding to hear the Deputy Chief Minister and Education Minister, Yvette Berry, say nothing was wrong with the Campbell Primary School procurement despite audit findings.

“This is an opportunity for Labor and the Greens to walk the walk and show Canberrans that they believe in action on government transparency,” she said.

“If they have nothing to hide, they should have no problems agreeing and committing to an independent external audit of all ACT procurement decisions over the past five years.”

The Liberal motion calls on the government to commission an independent audit of all ACT Government procurements contracted from 2016-17 to the present and table the audit report in full in the Assembly within seven days of receiving it from the independent auditor.