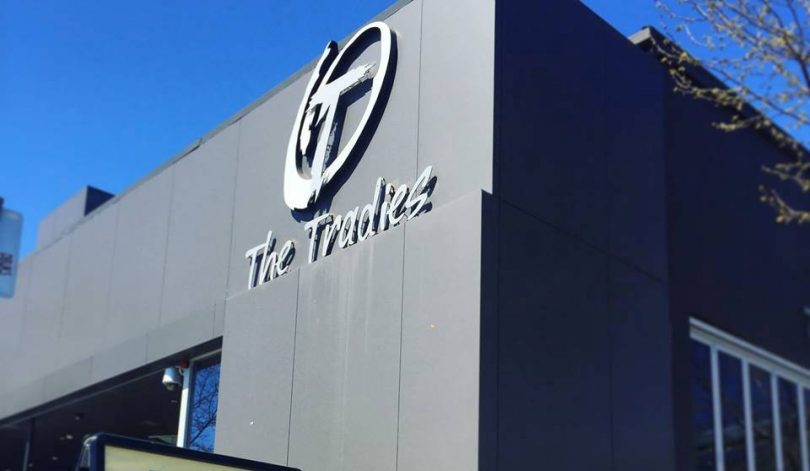 The Dickson Tradies still has not taken ownership of the land. Photo: File.

The Legislative Assembly committee investigating the 2014 Tradies land swap has recommended the deal be referred to the ACT’s corruption watchdog, but Labor members have dissented from its report.

The Public Accounts Committee, chaired by Liberal Vicki Dunne, split down party lines in its report with Liberal members finding the-then Economic Development Directorate’s (EDD) conduct of the sale of Block 30, Section 34, Dickson to the Dickson Tradies did not meet reasonable expectations of due process and probity.

The deal, which also involved the Tradies surrendering land to be purchased by the government, has been the subject of an Auditor-General’s report and Assembly scrutiny but remains a flashpoint between the Barr Government and the Liberal Opposition, which has made great play of the relationship between the Labor Government and the unions.

The Liberal committee members say that the new inquiry raises issues which only the ACT Integrity Commission can adjudicate, but the Labor members say there is no evidence of wrongdoing.

As a result, the PAC cannot refer the matter but Mrs Dunne wrote to the Commission on last Friday calling on it to investigate.*

The report says the conduct of the sale between 2012 and 2014 highlighted gaps in ACT legislation regarding the conduct of tenders and the disposal of land held by the ACT Government.

”This lack of guidance led to EDD freely negotiating and entering into contracts as if it were a private entity. This had an effect on the openness, transparency and accountability of the transaction,” it says.

It says the EDD offered terms to the Tradies as the successful tenderer for the land that were significantly different to those offered when the tender was released.

The sale in effect became a direct sale and the way the process was handled may have had significant effects on the block’s value, the report says.

It also says there is a question around the legal validity of the outcome, and record-keeping was consistently poor throughout the entire process.

”The EDD transacted a land swap which, although supported by some areas in government, had been specifically ruled out at Cabinet level,” the report says. ”This land swap resulted in the ACT Government paying for land surrendered by the Tradies while the Tradies have yet to settle on the sale of Block 30, Section 34, Dickson.”

But Labor Members Tara Cheyne and Bec Cody in their dissenting comments say the Tradies deal has been subject to significant media scrutiny, Auditor-General scrutiny, Opposition scrutiny and now Committee scrutiny, with no evidence of corruption or inappropriate conduct.

They say evidence showed that that negotiations were undertaken in good faith between the EDD and the Tradies, but the lack of legislative guidance resulted in EDD officers operating with the greatest possible scope to enter into contracts as they saw fit.

”A culture within EDD that did not put enough emphasis on record keeping is a major concern. We have supported findings which reflect these issues, and recommendations to address them,” they say.

In 2018, then Auditor-General Maxine Cooper found the deal did not achieve value for money, that the EDD did not conduct the tender effectively and may have breached the Planning and Development Act.

Dr Cooper found that there was a high risk the EDD had relinquished value up to an estimated $2.4 million to $2.65 million to the Tradies, due to significant inadequacies with how the negotiations and tender process were managed.

She said the deal did not achieve the sale objective of pursuing an open, contestable and transparent market process and there were indications it did not achieve value for money from the sale.

But Minister for Planning and Land Management Mick Gentleman said she had not found any evidence of wrong-doing on the part of any ACT Government ministers or ACT Government officials.

Opposition Leader Alistair Coe said at the time that the deal should be sent to the ACT anti-corruption body when it was set up.

“It is absolutely scandalous that $2.4 million has gone from taxpayers to the labour movement. It’s a merry-go-round of money between the Labor Government and Labor mates. This extraordinarily dodgy deal shows just how deep the cultural problems in the ACT Government run,” he said.

The fallout from the deal included a re-organisation and tightening of government land sales and urban renewal with the establishment of the Suburban Land Agency and the City Renewal Authority, with enhanced and robust governance frameworks, under the oversight of the Director-General of the Environment, Planning and Sustainable Development Directorate.

* This story has been updated.