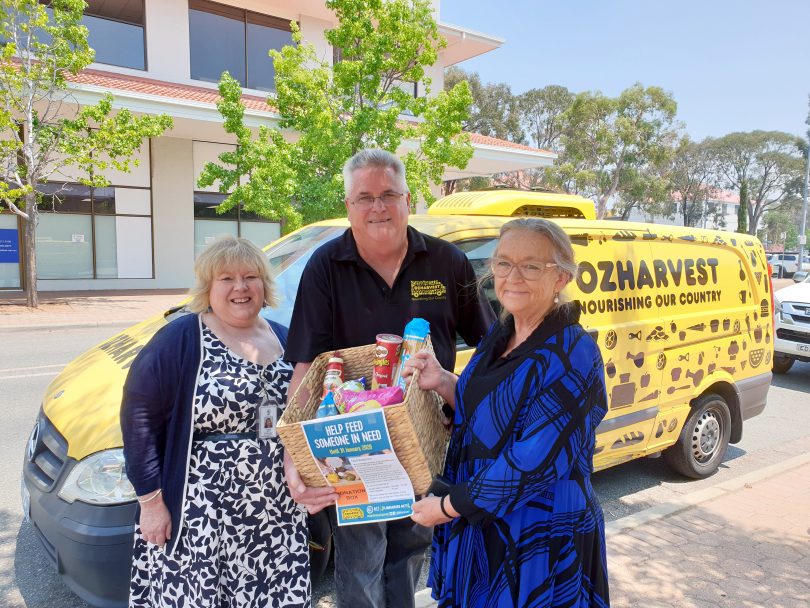 ACT libraries are teaming up with OzHarvest this year to take donations of non-perishable foods to those in need over the holiday season.

The new food drive to support the ACT’s most vulnerable members of the community replaces the popular Food for Fines program which ended when the ACT Government abolished library fines last month.

Member for Brindabella Joy Burch launched the food drive and encouraged Canberrans to get involved.

“It has been great to see the community pay their library fines with donations over the years, but when we wiped library fines people told us they still wanted to be able to spread goodwill during the holidays,” Ms Burch said.

“Our libraries are partnering with OzHarvest in a food donation drive to support Canberrans in need both during the festive season and throughout the year. By accepting donations at all ACT Libraries branches, it will make it easier and more accessible for people to help out and give where they can.

“The Canberra community are really generous, particularly during the holidays, and in the past we’ve seen many donations made as simple gestures of giving.”

Sealed tins or packets of non-perishable food items can be taken into any Libraries ACT branches, including the ACT Heritage Library, until 31 January 2020. All food will be donated to OzHarvest Canberra.

Donations must be dropped off during opening hours and cannot be donated through library return chutes. Only non-perishable, sealed foods can be accepted. Damaged, broken or out-of-date food items, perishable food, pet food, and non-food items will not be accepted.

Donations will be accepted until 31 January 2020.

Joshua Andrew Morgan - 11 minutes ago
Jayne Denise or just CAN the TRAM View
Jim Jim - 41 minutes ago
Paula Simcocks I’m in Downer and I didn’t see the $150 rebate that was claimed to be for all and supposed to be listed on... View
Paula Simcocks - 3 hours ago
Liberals letterboxed Downer saying no rates cuts - we pay rates there and have cuts View
Property 7

Sol - 3 hours ago
The Canberra Liberals are just far too religion and right wing for Canberra. They need to reform and become electable and put... View
Sol - 3 hours ago
That's pretty sad if that's all the Libs can muster after 20 years, that they're "different". Perhaps if they were actually w... View
ACT Election 33

Stephen Esdaile - 4 hours ago
Can't vote Liberal, not voting Labor or Green. Looking at what the progressive are offering.... View
Frank Koch - 6 hours ago
Phillip Business Community well said View
Martin Miller - 8 hours ago
Charny Barney no 'whackadoodle ideas here . He's just plain arrogant to those who disagree with him. There is no real consult... View
News 42

Jak Kanard - 6 hours ago
If this is true, and not compromised by the buffoonery masquerading as ‘government’ in the ACT, bring it on ! View
Emerson Yang - 8 hours ago
Jack Gabriel decent sale prices View
Opinion 1

tonyd535 - 6 hours ago
Maybe a hospital first to take pressure off of the existing facilities. One for Gungahlin and another for Tuggeranong to take... View
ACT Election 8

John Coleman - 10 hours ago
Gai Hodgson Wilson consider it a reminder that we live in a democracy. They're up for a few weeks. If they stay up, there's f... View
Joe Zuzek - 11 hours ago
SP Brogues They are recyclable and I believe most parties will recycle their signs. View
Jason Preston - 11 hours ago
Thank you for the election proliferation of corflute signs I’ve got enough stakes for my tomatoes now 🤪... View
show more show less
*Results are based on activity within last 7 days

Libraries ACT and why you need to go there

Sharing the food: our vulnerable are hungry for help

@The_RiotACT @The_RiotACT
More than 100 kindergarten students in Gungahlin received their first tennis racquets this week. They're unlikely to forget the occasion - they were signed by Canberra tennis stars Alison Bai and Nick Kyrgios, and then they had a virtual lesson https://t.co/6nLDXetsHb (2 hours ago)