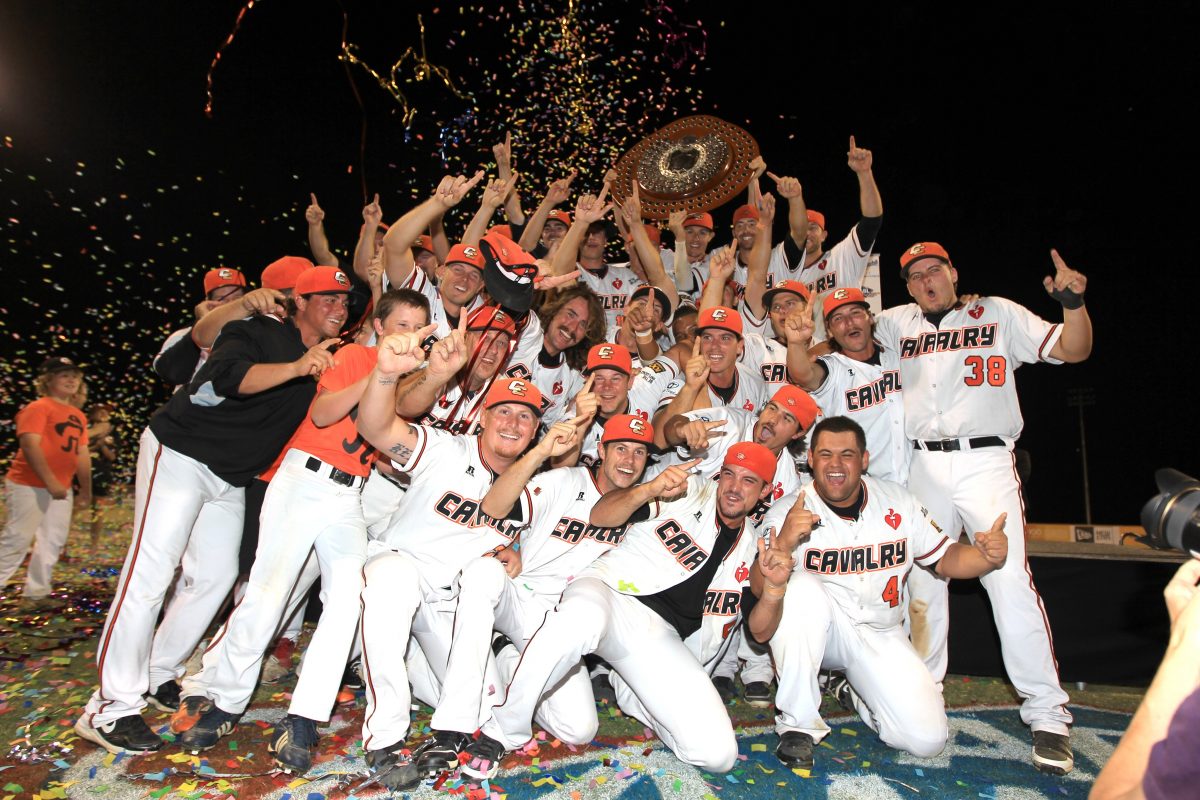 It was 2013 and baseball was not so much as a blip on the radar of your average Canberran. But celebrity wasn’t front of mind for the Canberra Cavalry anyway.

In their third year, ‘the Cavs’ had somewhat of a cross to bear, according to Brian Grening, one of the team’s star players at the time.

“We were meant to make the playoffs in the previous season, but they calculated something wrong and we ended up not making the cut,” he said.

It set the scene for a triumphant time in Australian baseball and an underdog tale for the ages.

Even before making playoffs for the Australian Baseball League Championship Series, the players knew there was something about this lineup.

“Throughout my whole career, it felt like the League was mostly interested in the Sydney and Melbourne teams winning. We took it personally and tried to make a name for ourselves. In a way, it was a kind of driving force. We wanted to beat them all,” Brian said.

“The pressure wasn’t really on us, though. There was zero interest in baseball, and I don’t think anyone really put stock in the team.

“That is until we started winning.”

Matt Percy, who had been a ground announcer for the team from day dot, said upon their return after winning the semi-finals in Adelaide, fans greeted the players at the airport.

“I think we captured Canberra a bit at that time,” he said.

“The name was out there, we had some hardcore fans and the wider Canberra community backing us, and momentum was starting to build.

“I know the feeling around the guys was, ‘now that we’ve made it this far, we’re not going to lose this’.”

By the time the Championship came up in February, it was like something had a hold of the team.

“We had guys like Jack Murphy who led the team, and he set the tone. We started to beat people and we didn’t feel bad about it. We were like a freight train off its rails, nobody was stopping us and we loved every moment,” Brian said.

“We absolutely crushed the team we played in the Championship, and we started to think – maybe this is not a fluke.”

The team progressed to the Asia Series in November where they had previously had “zero success”.

“We hadn’t so much as hit a home run there, let alone won a game,” Matt said.

“We were booked for three games initially, but nobody expected us to win any of them. We even had our return tickets booked.”

Those flights would be rescheduled twice.

At first, nobody took much notice of the team from the tiny nation’s capital of Australia, with its payroll of $45,000.

Then they won their first game. Then their second. Eventually, all eyes turned to watch the Cavs win five out of five games.

The estimated payroll of the team they beat in the Asia final was $22 million.

“The Asia teams were good, but we were having more fun and we weren’t intimidated by anything,” Brian said.

“It was the best feeling.”

Matt said it’s a chemistry the team’s been chasing since.

“We’re celebrating 10 years since that win this year, and want to get back on top of the mountain,” he said.

“Aside from one or two seasons, we’ve come really close every year … I feel our next win is not far away.”

But the ultimate goal isn’t for victory for the sake of victory.

“The pool of players we can draw from for Canberra Cavalry is small – we only have six local teams. The likes of Sydney, Melbourne and Perth have dozens,” Matt explained.

“Our main goal isn’t to win championships. Our main goal is to grow the sport, in particular, our junior base, because until we do that, we’re always going to be the underdog.

“For example, take Jack Murphy – an American catcher, a star. Everyone loved him. His understudy during the championship win was Robbie Perkins, a local boy. He learned from Jack and now he’s in the position Jack was in 10 years ago. Those are the sorts of stories we’re looking to build.”

The Cavs will be celebrating the 10th anniversary of the historic season at their game against the Perth Heat at MIT Narrabundah Ballpark on Friday January 13. You can purchase tickets via Canberra Cavalry.