Experts in buying, selling & renting
Your property, your future
13 July 2020 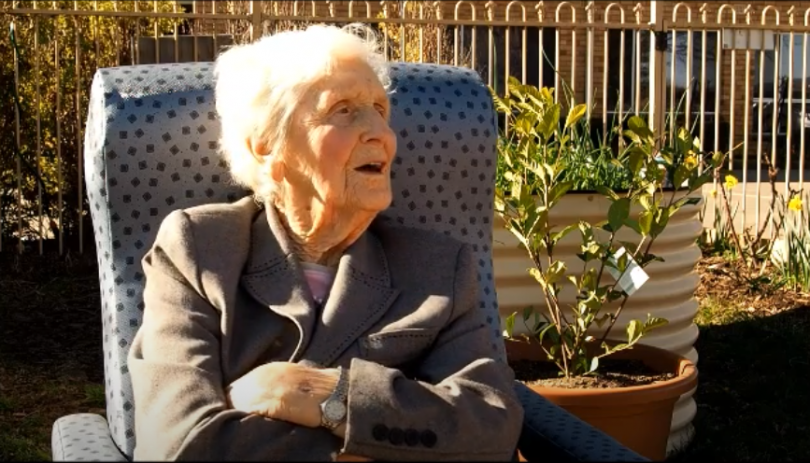 Linda Moore during an interview before she died, aged 105. Photo: Screenshot.

Linda Moore (nee Kelly) was born in 1915, six months after the outbreak of World War I and two years after the creation of Canberra as the national capital.

“You could say that Queanbeyan built Canberra because all the people lived there while all the building was going on,” she said during an interview with local historian Nichole Overall (you can view the video below).

Queanbeyan-Palerang Regional Council mayor Tim Overall said they were saddened to hear of the passing of Mrs Moore.

“It was a pleasure to have known Linda, whose family have long been involved in the Queanbeyan and Canberra community,” Mayor Overall said.

Linda married Noel Moore from ‘Lagoon’ at Burra at St Patrick’s Church in Michelago on 30 May 1942. They lived at Burra until 1974 when they moved to Queanbeyan and lived there ever since.

Linda made her home in Crestwood for almost half a century and had a strong family connection in that area. Her great grandfather, Garry Owen, farmed dairy cows where the current Campbell St Bowls club and tennis courts are situated.

Noel died on 20 June 1996, but together they helped raise six grandchildren and seven great-grandchildren.

Linda was a valued member of the community and saw much change in the region over 105 years.

“Queanbeyan was pretty slow in those days,” she said. “It was a nice friendly town. We played tennis and cricket and went to dances.”

Sport was central to social life then: Linda played tennis at Michelago and Burra and was part of Michelago’s first women’s cricket team. Fellow Queanbeyan resident Jim Woods taught her how to bowl when she retired, and she took to the sport with enthusiasm.

Speaking in 2018 about her memories of seeing Queanbeyan grow, Linda recalled landmarks like the art deco and much loved Royal Hotel rising when she was 11 years old.

“We lived at Burra and when we came in to town – first in horse and buggy and then T-Model Ford – we’d stay at what is now the Royal.”

She later celebrated her centenary birthday at the Royal in 2015, a spectacular occasion marked by cards from the Queen, the Governor-General, the Prime Minister, the NSW Premier and Governor. An apostolic blessing was bestowed upon her on behalf of Pope Francis by Father Troy at St Raphael’s Catholic Church.

Born in Queanbeyan on 20 January 1915, Linda Moore is survived by her three children Thomas, Clare and Janice.

Love to her family.

Linda was a truly a lovely lady. Condolences to the Moore family. 💝

This is my lovely mum ❤️

Janice Moore so sorry for your loss

Janice my condolences to you all

Janice Moore thinking of you all ♥️ Lynette (Ashley) and family 💕

Janice Moore my condolences at the passing of your mum.
She certainly sounds like she was a very busy person and quite the gettabout. Lovely story.

Janice Moore sorry for your loss. Thinking of your family at this time ❤️

What a legend! Love the local and important news you present riotACT! Keep it up