Little pantries have Canberra origins down a quiet neighbourly street 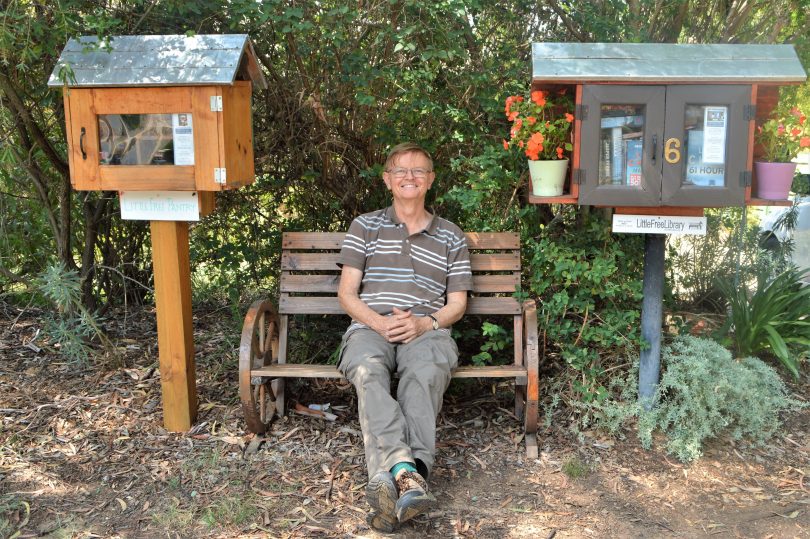 Curtin resident John Lovering with the little free pantry and little street library he built outside his home. Photos by Glynis Quinlan.

With street libraries taking off in the ACT, interest is starting to grow in a similar idea – little free pantries.

An offshoot of the street library concept, little free pantries stocked with donated food have become popular in America but only started in Canberra two years ago.

And interestingly, their origins here began down the same quiet neighbourly street in Curtin where street libraries here are thought to have started.

John Lovering began what is thought to be Canberra’s first official little street library outside his home in Cockburn Street about five years ago after he retired, but it wasn’t until two years ago that he built a little free pantry.

Having seen the success of his little street library and the way it created community spirit, it was an easy step to take but it began with a challenge. 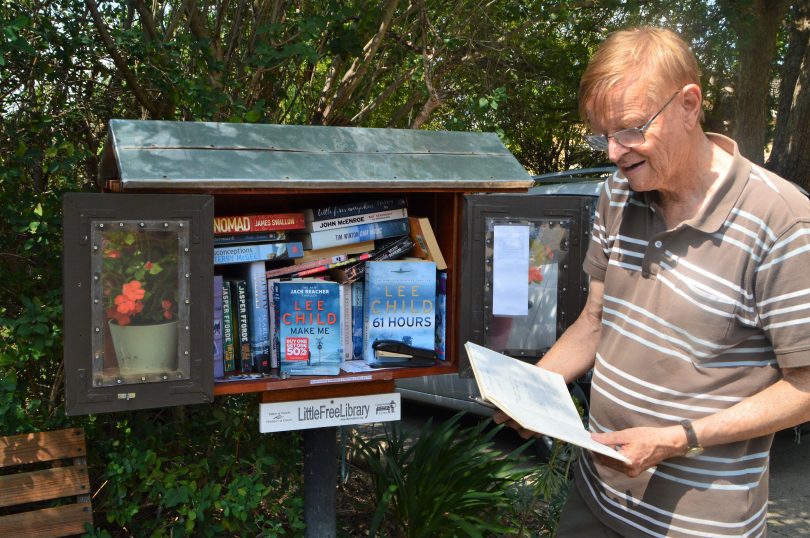 “The little free pantry has a story behind it,” Mr Lovering said. “The story starts with a train trip to Melbourne. A vivacious lady sat next to me who was an artist and showed me all her artwork and it was fantastic. The only thing I had on my phone that I could show her was a little free library.

“Coming back on the train six months later, as we went through the same train station, the same lady sat next to me and she said ‘look what I found on the Internet, little free pantries. I’ll race you to make one’. I got there first, she hasn’t done hers yet.” 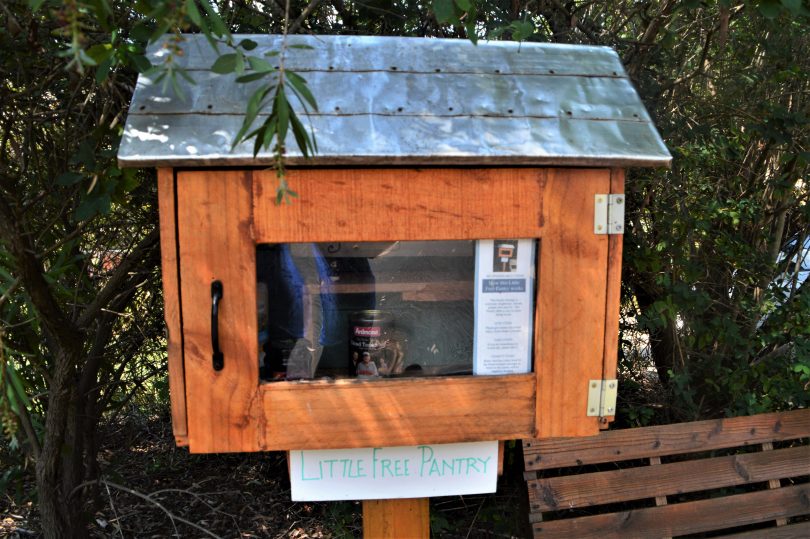 Curtin’s little free pantry started two years ago and is thought to be the first in Canberra.

In common with ‘lil street libraries’, little free pantries are easily accessible from the street and walkers-by can add to, swap something or take from them as they like. However, instead of being stocked with books, the little pantries are stocked with food.

The idea behind the little pantries is about neighbours helping neighbours – whether it’s providing food to those in need, having an opportunity to donate food, or just the fun of swapping surplus food with neighbours.

“This one here probably does more to swap produce with neighbours than it does to help people in need,” said Mr Lovering.

However, he said that sometimes if the little pantry has been filled up with food he will empty it and take it to Anglicare.

“I realise that our community isn’t one that’s food challenged and so it goes down to Anglicare,” he said.

The food pantry isn’t used as much as the street library but at times it provides a great place for neighbours to trade homemade and homegrown produce – such as eggs, zucchinis, jams and even homemade olives. 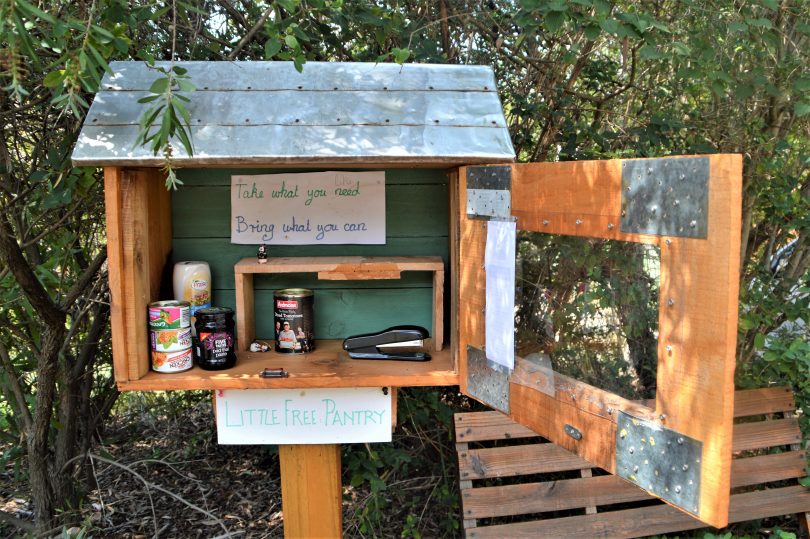 The Curtin free pantry is a great place for swapping surplus produce with neighbours.

In recent weeks, Canberrans have been expressing increased interest on social media in seeing more little free pantries in the city, particularly after SBS coverage of the topic.

“What a brilliant idea to have around our suburbs!! I always end up with extra bits in my pantry, would love to help someone who may be in need!” was one Facebook post on the Canberra Notice Board Group.

“What a lovely idea, wonder if we have any in Canberra?” was another.

“Oh my gosh, what an amazing idea!” commented one person. “What a brilliant idea!!” commented another.

Greens candidate for the federal seat of Canberra, Tim Hollo, started the first Facebook-based Buy Nothing Group in Canberra in 2013 with a handful of friends and said that Canberra has a vibrant sharing community.

He encouraged Canberrans to consider setting up a little free pantry or another sharing initiative, saying that it builds on community connections and “gives people access to things they might need but might not have the capacity to buy”.

“Anyone I’ve talked to whose got involved in one of these things has found it a wonderful experience,” he said.

Do you think little free pantries are a good idea? Let us know in the comments below.

Andrew Khin Maung - 6 minutes ago
Stuart Green Think about it. The stats are pretty logical. Its like if a bug flies into a car. The bug wouldnt have died if t... View
Andrew Khin Maung - 11 minutes ago
Paul Baynham i agree! The stats are just as high as when cars have caused several collisions with wildlife. View
Samuel Gordon-Stewart - 2 hours ago
John Hawkins I’m all for optional seatbelts (and optional helmets, for that matter). A spike in the steering wheel, while i... View
Property 21

Eric Katic - 52 minutes ago
If you live in any west Belconnen suburb, don’t bother clicking on the link. View
Simone Eagan-Akuhata - 1 hour ago
Symantha Lee you’ll be on the list at age 33, just you wait 🤣🤪 but really... let’s manifest those dreams 🤗 View
Ashley Wright - 7 hours ago
Nigem Hamedeh the article is about median house price not highest. View
News 19

Julie Macklin - 6 hours ago
No, not everyone has young children. If someone wants to stay away from things on Sunday, they can now. They can make their o... View
Christopher Cuba Rabanal - 9 hours ago
How about a six day week with every Sunday shut. Where everything is closed in a Sunday Sunday is family Day ?... View
Valerie Foster - 12 hours ago
Been talking about that for years. View
Community 38

Catherine Udovicic - 7 hours ago
If this is for women and children who have to escape violence in their own homes, I wouldn't worry about the men unless they... View
Deb Batt - 10 hours ago
Wonderful View
Dee Kaden - 10 hours ago
What about men that are homeless??? Anything similar for them? View
News 12

JS9 - 8 hours ago
So Tim, where is anyone telling you you have to buy an EV now? Noone is, and most will purchase an EV when it stacks up for t... View
Futureproof - 14 hours ago
Great, I'll spend $70k so I can save on my electricity bill View
Community 44

Colin Ball - 9 hours ago
Why do they get game consoles?it's meant to be a place for punishment not reward, what about the people who have worked hard,... View
Steve Whan - 10 hours ago
Just curious, do instigators of damage have their terms effected due to vandalism caused? I dont know. Just curious. View
Inca Serrated - 12 hours ago
Not a single mention of the conditions that prisoners are living in... Lockdowns, no family contact for over a year, no meani... View
Lifestyle 14

Not that long ago, my partner and I were part of the teeming masses of young people trying to get...
News 130

More than 1000 Canberrans across six suburbs have been given the chance to change the look of their streets as...
Opinion 35

For a planned city that is supposed to be a shining light on the hill, Canberra is rotting at its...
Property 21

@The_RiotACT @The_RiotACT
Edgar's has added another restaurant at its iconic location in Ainslie. The Inn offers a European bistro feel with a dark, moody atmosphere ... and the mash of Sophia Brady's dreams https://t.co/AoXEOQ5I8Y (11 hours ago)

@The_RiotACT @The_RiotACT
Around 250 people enjoyed a strip and dip in freezing temperatures this morning for @Lifeline_ACT's fifth Winter Solstice Nude Charity Swim! Were you there? https://t.co/8AcpLjpUyp (12 hours ago)