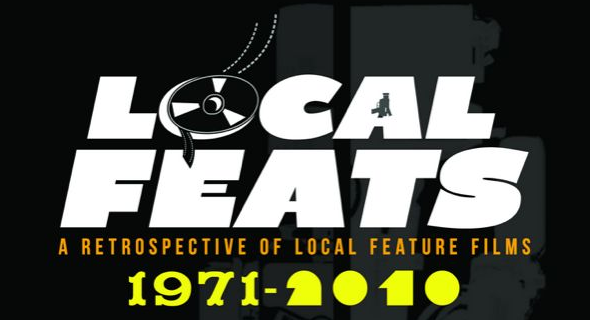 This in from New Acton and sounding very interesting:

Local Feats is a retrospective of local feature films made in Canberra between 1971 and 2010.

Starting 1971, screened from an old 16mm projector, we will travel through the years each fortnight with the director and one of his/her short films. After a talk and the screenings, the director will be there to talk about the film. Hosted in NewActon’s gorgeous little Kendall Lane Theatre with the Canberra Short Film Festival.

This is a great way to support local film makers and enjoy a Thursday evening with friends. $5 of each ticket goes to the maker of the night’s films.

See the posterfor a list of films, dates and a quick blurb.

A full list of the film series is on the poster below. 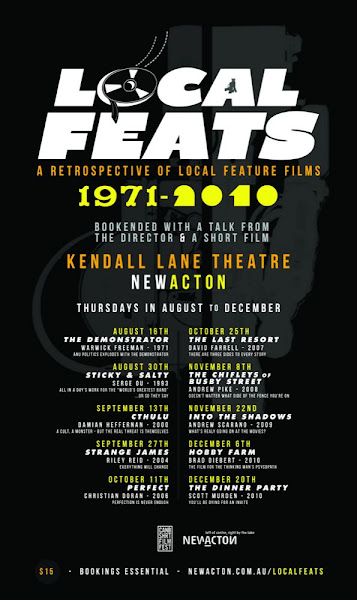 One Response to Local Feats, a retrospective of local feature films 1971-2010
Filter
Showing only Website comments

Remarkable to see The Demonstrator (1971) on the list. I wonder how it managed to survive. Classic Aussie film Wake In Fright, released a few months earlier, completely disappeared for over 30 years and when enough parts of it were found over the years it was digitally restored frame by frame and issued on DVD in 2008.

A_Cog - 1 hour ago
The ACT Labor Government's terrible performance running core services like Health is what SHOULD matter in elections, but in... View
Best of Canberra 29

Juanita Caddy - 2 hours ago
Had a great experience recently with Kyle Dedini. I had a few problems with my left foot, and after months of pain and confus... View
Justin Bathurst - 18 hours ago
Have been seeing Kyle now for over a year. He's the only podiatrist I've seen who's taken time to work on the problem in an o... View
Lifestyle 1

Jacky Fogerty - 2 hours ago
Thank you so much Larissa for a wonderful article! As well as providing a precious record of our local flora and fauna and he... View
ACT Election 5

maxblues - 2 hours ago
South Australia recently banned the use of political corflutes for future elections., not just because of the visual pollutio... View
I am a Rabbit™ - 4 hours ago
The Greens classify as a minor party but don't seem to believe that spreading the equivalent of spam everywhere is a fair res... View
steve2020 - 12 hours ago
The problem I find with corflutes and other political advertising is that it can be a bit overboard, with the same signs over... View
News 5

Darron Marks - 3 hours ago
Public service super has been a time bomb for many international governments. I will give the Liberal party this they did set... View
tfx1 - 15 hours ago
A now bankrupt Australian economy and therefore the tax collecting Australian government is being asked to pay additional mon... View
Property 2

ny4231 - 4 hours ago
This proposed apartment is built right to the edge of the block and is not set back at all. It is not difficult to find a pla... View
Nick Swain - 18 hours ago
Mr Georgalis might like to check the extent to which the high rents being sought by some landlords in Kingston are keeping th... View
Sport 1

Stephen Saunders - 5 hours ago
What I thought. Somebody send him a soft-toy koala. View
ACT Election 2

Nudist - 6 hours ago
L an excellent summation of the current state of play in the Gungarlin electorate. I’ve had involvement with Peter on at le... View
Fiona Carrick - 13 hours ago
Hi Peter We are singing from the same song sheet. It is time the Government looked after our Town Centres! The Woden Town Cen... View
Community 8

Bill Gemmell - 15 hours ago
Jayne Bobby isn't it going to be a burn out pit? View
News 12

Capital Retro - 18 hours ago
I believe that is unprecedented. View
News 4

J D - 19 hours ago
My difficulty with Hare-Clarke is that IF that 'Election ACT' youtube video explanation is accurate, then the 'surplus' is re... View
show more show less
*Results are based on activity within last 7 days

A man has died following a crash between two B-double trucks near Yass last night. About 10:15 pm, emergency services...
News 5

The Australian Public Service is sitting on an unpaid superannuation time-bomb that is soon to come to a head in...
News 2

As the election nears, how do we ensure the voices of ordinary voters are heard? We're in election forum season...
Opinion 17

@The_RiotACT @The_RiotACT
Canberra Women in Business is looking for the smartest and savviest local business brains for its annual awards. Do you know someone whose achievements deserve recognition? https://t.co/81bRxAbdZ6 (1 hour ago)

@The_RiotACT @The_RiotACT
In a scathing report, the Auditor-General had found that between 2013 and 2019, ACT Health failed to improve the healthcare of people who suffer from chronic conditions https://t.co/2AJt33HKY8 (2 hours ago)

@The_RiotACT @The_RiotACT
At the Gungahlin Jets netball club, all-abilities team the Shooting Stars is all about making friends and having a go https://t.co/Vz1XHaocOy (3 hours ago)