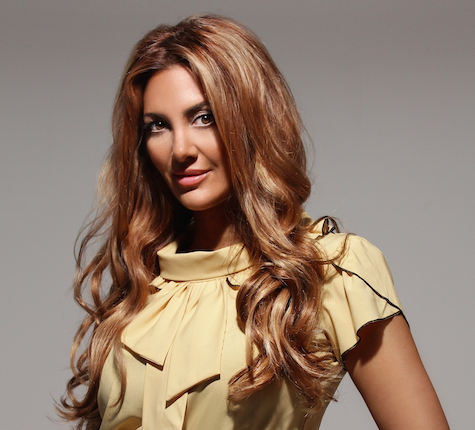 Melissa, who raised $9375 during the 12-week fundraising challenge, says the win was unexpected, with many of her donations coming through at the last minute. She plans to use the win to promote healthy living to young people.

“While the Heart Foundation challenge focused on adults improving their health, kids look to adults and watch what they’re doing, and it’s important to be a role model when it comes to being healthy,” she says.

Melissa is a former primary school teacher and director of production company Entourage Productions, which specialises in concept, tribute and cabaret-style shows and won the cheerleading contract for the Canberra Raiders earlier this year. She’s also the director and owner of dance troupe Rogue Dolls Australia.

Melissa describes herself as an ambassador of the women in league movement, and is committed to challenging perceptions both about women and cheerleaders in the NRL. So when she took over the Canberra Raiders’ cheerleading contract, she says she focused on developing a more professional, corporate image for the squad.

“We’re moving away from the old cheerleading stereotype. We see ourselves more as brand ambassadors who are just as comfortable in a corporate environment, or at a charity event, as we are at the game,” she says, adding that the Emeralds’ junior cheer squad also performs at Raiders games.

“It’s more family friendly, and the overall feedback both from the NRL and fans has been positive.”

The Emeralds also supported Melissa’s fundraising efforts for the Canberra Celebrity Heart Challenge, raising $1000 in five days through pre-order sales of the squad’s 2015 calendar (which Melissa insists is “demure and classy” and “not your run of the mill cheerleading calendar”).

Melissa says that working in the ultra-competitive entertainment industry has more than prepared her for the challenges of managing several businesses and a young family.

“I’ve learnt that you need to find your niche. My niche is in the corporate sector of entertainment, and we’re quite well known not only in Canberra but also in Sydney, Melbourne and Brisbane. Our Vegas-inspired productions are quite unique nationally,” she says.

For someone who has worked and lived in some of the world’s most exciting destinations, it is perhaps unsurprising that Melissa wasn’t enamoured by Canberra when she first moved here from Sydney via Las Vegas in 2007. Fortunately, she says the city didn’t take long to win her over.

“It took me a while to call Canberra home, but it’s such a great place to bring up a family. It’s small enough that if you work hard and develop a good reputation, people will want to work with you and they’ll want to recommend you too,” she says.

Phil Hopkins - 3 minutes ago
Craig Rogerson And they already get their voting from x from Reality TV Shows! View
Craig Rogerson - 13 minutes ago
Of course the Greens would love this . They would be their biggest supporters . Straight out of the education system that is... View
デ スティーブ - 26 minutes ago
Need a bill to cap the legal age of voting to 79. Why should 80+ year old vote on the future for teenagers? Most 80+ year old... View
Opinion 78

Natalia Komarova - 17 minutes ago
When my friend lost her husband she said to some extend she lost her social circle as well. While she would catch up with her... View
Patrise Dowling - 1 hour ago
Nah. Get a dog. Demand free love. View
Michael Strand - 2 hours ago
So when she asks if she needs to lower her standards, what does that mean? Maybe looking at a guy is not not 6ft tall, or a t... View
Food & Wine 9

Chris Thomson - 1 hour ago
Wayne Britten got a hotline direct to the manager now lol View
Wayne Britten - 2 hours ago
Chris Thomson sounds like you rung that number a few times mate View
Sharron Baig - 3 hours ago
So what is it you's will actually go out for, when you's are called?????? View
News 72

ACT residents will soon be required to self-submit a report online when they are victims of certain crimes, including house...
News 64

Two reports this week have highlighted the growing housing divide in the ACT, in the rental market, and between renters...
News 28

@the_riotact @The_RiotACT
Looking for something to do in #Canberra this week? From #Christmas markets to Korean #films, here are 10 things to do in the capital https://t.co/FGRP1gEBLz (55 minutes ago)

@the_riotact @The_RiotACT
Virgin is restarting its Canberra-Sydney service using Link Airways planes, with up to nine flights per weekday https://t.co/QGcgoaSMTa (60 minutes ago)