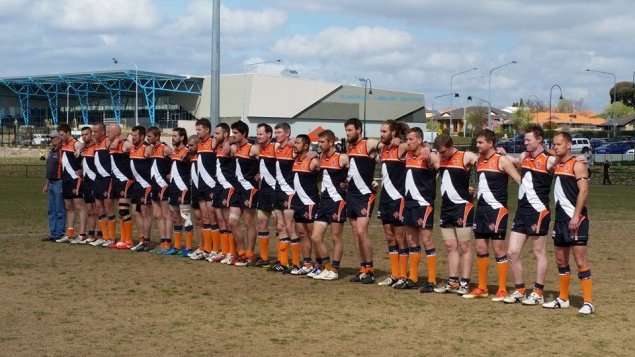 With less than a week until the first game of Canberra’s 2015 AFL season, Molonglo Juggernauts Football Club’s (MFC) three senior teams are ready to build on last season’s success – though president Anthony Cutting says doing so won’t be easy. 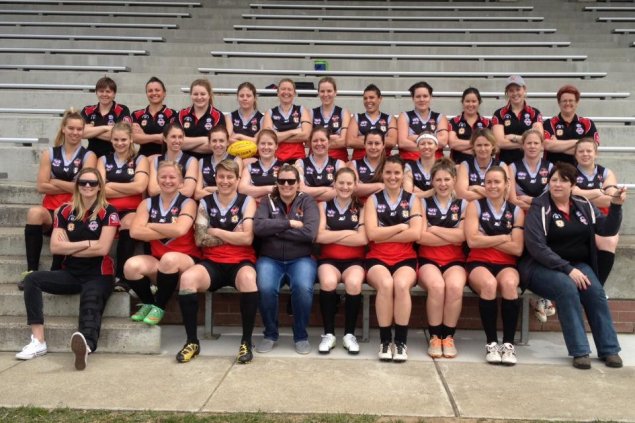 In fact, the 2015 season will be only the third that the Juggernauts have fielded a women’s team. Anthony, who has played for the club for almost a decade, says this is one of the club’s biggest achievements since its last grand final win in 2005.

“We tried several times to get a women’s team going, and we’d had some interest over the years, but it never really took off until we were approached by a few experienced women’s players who wanted to start a Juggernauts women’s team. It was their determination and drive that really got things started,” he says.

As someone who played a single season in the Canberra AFL women’s competition a couple of years ago, I have to hand it to our city’s female AFL players. People think women’s sport isn’t that full-on, but I’ve seen enough ACL fractures, broken ribs and players being lifted off the field on stretchers to know better. It’s a beautiful game, but my goodness, you need to be tough to last multiple seasons. Respect!

Anthony says that one of the benefits of playing for a community-focused club like MFC is that while there is always a drive to win, coming out on top isn’t the only thing the club values.

“There’s a great love for the club from the players. It’s not win at all costs. You can be competitive but you can also have a good time with your mates,” he says.

“What we do a great job of is helping new players out, making them feel welcome and engaged, particularly if they haven’t played before.”

At least two of the men’s players have played over 250 games, and Anthony suspects that a couple have been playing for almost as long as the club has existed (it celebrated its 20th anniversary in 2014). He is grateful for the volunteer support of long term players, newer players and friends of the club, who have helped MFC to operate for the past two decades.

“This club is one hundred per cent volunteer driven. Community clubs don’t exist without volunteers, and we’re incredibly grateful for our volunteers who help out with everything from game day to fundraising and working in the canteen to opening the gates before training,” Anthony says.

This is a new weekly series profiling Canberra sporting clubs. To nominate your club for an upcoming profile, please email editor@the-riotact.com.

Dani Hache - 3 hours ago
Whilst this is 100% accurate, it cannot be fixed with the government failing to invest in an APS workforce. These businesses... View
Bill Bloxham - 4 hours ago
Been going on since Adam was a boy View
David W Jones - 6 hours ago
Just look at the number of contractors that just keep getting extensions or renewals with no questions asked! View
News 6

jam - 3 hours ago
The tram is more easily accessed by more people as it encourages dense development within its reach. It isn’t really possib... View
bj_ACT - 4 hours ago
The issues with the Bus route changes and the loss of bus stops for Tuggeranong in 2019 were obvious to anyone with half a br... View
Winkie Wee - 5 hours ago
I'm lucky in that I live within a short walk to either the R4 or R5 buses. I use the bus quite a bit unless both of us need t... View
Breaking 4

jam - 3 hours ago
That said, though, bikes are required to slow to around 10km/h before crossing - a bike crossing at the otherwise speed limit... View
jam - 3 hours ago
It is not “bugger all inconvenience” it actually makes a big difference when it is your commute! When I drive past a cros... View
liberalsocialist - 7 hours ago
What a disgrace. And while in no way taking away from this cowardly act, I have come from NSW where we are told to dismount a... View
News 161

Jimbo Lambert - 4 hours ago
Areas in Gungahlin haven't been mowed for at least 6 months! How hard is it to use our high rates money to employ some more m... View
Jimbo Lambert - 4 hours ago
Randy Goldberg you mean 6 months later? You must live in a more affluent area than Gungahlin, as it seems we have been alloca... View
Frank Arnold - 6 hours ago
Ohhh myyy Goddd !...Crooked pavements!...pot holes in our roads!...and now it's long grass !!!! FFS we hardly had any 3/4 yea... View
Community 6

kenbehrens - 7 hours ago
That makes no sense. Your comparisons are 20-25 years apart. The "new" bus route takes longer because it services a bigger ar... View
bj_ACT - 7 hours ago
Not sure about the adding 10 minutes to the 333 journey by changing to go past College St and UC. The change Only added 1.2km... View
michael quirk - 12 hours ago
Yes,but it is by no means certain that light rail stimulates urban redevelopment more than BRT. Much depends on design of the... View
News 1

rocca66 - 11 hours ago
I was staggered to think there could be 30,000 public service compensation claims. View
News 15