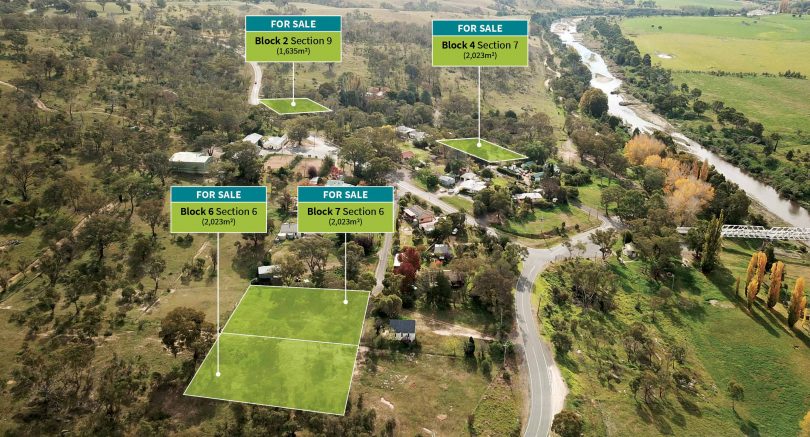 The Suburban Land Agency will bank $1.37 million after the rare but rapid sale of four country blocks in the historic village of Tharwa in the Territory’s south.

Colliers’ Josh Reid said the blocks lasted only 13 minutes when released last Wednesday (3 June), all snapped up by purchasers with local connections.

Pitched as having all the attractions of country life but the convenience of being only 14 km to the Tuggeranong Town Centre and 25 km to the Woden Town Centre, Tharwa, according to the SLA, is the perfect opportunity for a country lifestyle, to create a more sustainable and self-sufficient presence, and be part of a close-knit community with a rich history.

It was a message that resonated with potential buyers, with the blocks on opposite sides of the village attracting a huge volume of interest but the locals were too quick.

”I knew nothing had been released there for some time so I knew demand would be strong but it far exceeded what I’d expected. We had huge volumes of inquiry and a there were a lot of people keen to get a block of land out there,” Mr Reid said.

Details of the four blocks listed on the SLA website.

Mr Reid said the buyers’ local knowledge was an advantage in securing the blocks.

”That’s probably one reason the locals were quick to move on them because they’re comfortable with what they’re dealing with out there,” he said. ”They certainly knew what they were up for and were able to act quickly.”

Mr Reid said the purchasers had either grown up in the area or lived on farms nearby, and the intention was to build single-use residential homes.

”It’s a bit of a generational story. A couple of families have purchased with the idea that the kids will be moving in there,” he said.

The blocks are zoned RZ1 – Suburban, and the SLA says development will be subject to the guidelines and precinct codes in the Tharwa Village Plan 2018 to ensure Tharwa maintains it unique character and charm.

Mr Reid said there would be another opportunity to buy into a country lifestyle, with more blocks to be released, although he did not know when.

Nathan James how didn’t we know about these - annoying

Andrew Elphick well 13 minutes is hard to beat!!! Next time...

Krystal Elphick did you know about the blocks?

Samantha Costigan not until it was too late 😢

phydeaux - 37 minutes ago
"Penalising “poorer” [sic] people less, is an incentive for them, and a serious grievance to others" So sorry to hear tha... View
kenbehrens - 40 minutes ago
Difficult question. I've often thought that fines are inequitable with those on higher incomes not adversely impacted. Yet th... View
domenic - 3 hours ago
Penalising people differently based on their ability to either do well for themselves or not is a socialist ideology that I d... View
News 4

bj_ACT - 59 minutes ago
Tuggeranong’s water quality has not been getting better. I didn’t know you were such an easy marker on the score of ACT g... View
chewy14 - 2 hours ago
BJ, The problem is that short of getting rid of the Lake entirely, there is no easy (or cheap) solution. Most of the problems... View
Mikey Moore - 3 hours ago
Turning an artificial pollution trap into a clean waterway with actual amenity is a huge ask with countless unknowns. It was... View
News 1

@the_riotact @The_RiotACT
ACT Senior Australian of the Year and 50-year volunteer with @stjohnaustralia Valmai Dempsey wants mandatory #first-aid training for learner #drivers. She says it's a no-brainer https://t.co/Xovhw0Ec3H (6 minutes ago)