Long wait over for Muslim community with opening of Gungahlin Mosque 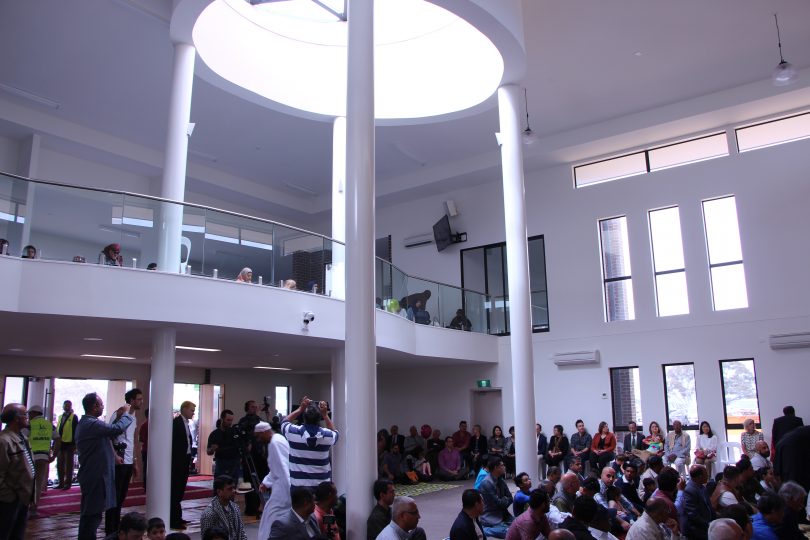 The community celebrates the opening of the Gungahlin Mosque on Sunday. Photos: Canberra Muslim Community.

The opening of the Gungahlin Mosque after a 17-year wait is ‘sheer joy’ for the 5000 to 6000-strong Muslim community in north Canberra.

The $2 million building which can hold about 600 worshippers was officially opened on Sunday at a community celebration that attracted about 2000 community members and supporters.

President of the Canberra Muslim Community, Mainul Haque, said that previously the community had to travel to Yarralumla mosque or the prayer space in Banks to worship.

But he said the mosque won’t just serve a religious need but also be a place of gathering and celebration for the community, which itself is comprised of 40 different nationalities.

Mr Haque said the community had been the driving force behind the project, with every cent coming from ‘Mums and Dads’. 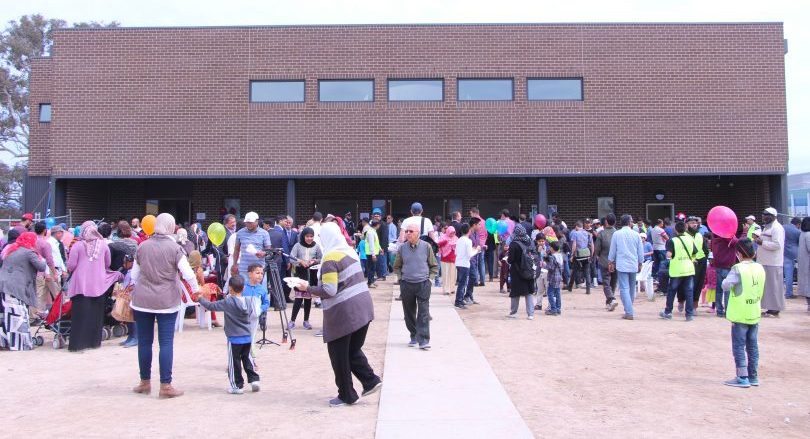 Planning for the mosque began in 2001 and building approval was granted in 2012 but the Concerned Citizens of Canberra Inc appealed. It lost the fight to stop the mosque being built in 2015.

Mr Haque thanked the community’s non-Muslim supporters, particularly its Gungahlin Uniting Church neighbour, for standing by the project during the objections and court cases that delayed it.

“Gungahlin Uniting Church is an amazing next door neighbour. We are so grateful to them for their strong support, morally and in every possible way,” he said.

“All religion is from the same source – we should increase our tolerance and learn to live in a society in harmony, and the Gungahlin Uniting Church is the very best example of that.”

Sunday’s celebration was open to everyone. “The whole community was invited to meet us and to get to know us. That was the objective,” Mr Haque said.

He said the community was also grateful to the ACT’s main political parties for their support.

There are still big plans for the future with the site only half developed. Eventually there will be classrooms for educational activities, seminars for interfaith dialogue, a library, and a community kitchen and centre.

“There’s a lot more to be done,” Mr Haque said.

“President of the Canberra Muslim Community, Mainul Haque, said that previously the community had to travel to Yarralumla mosque or the prayer space in Banks to worship.”

I was unaware that there was a place at Banks allocated to Muslim worship. Where, exactly?

And why couldn’t the mosque at Monash be used or even more centrally, the main meeting room at the Theo Notaras Multicultural Centre in London Circuit which is permanently booked for Muslim worship every Friday?

Just seeing the photos on the new mosque at Gungahlin is pleasing to the eye – it looks better than most of the Macmansions out that way.

Kali - 24 minutes ago
Poster boy for the 'it's all about ME' generation. View
Jennifer Albs - 2 hours ago
He is great player and pretty talented man, but his behaviour over shadow everything and not to mention mode swing, plus acti... View
Stewart Mcdonald - 2 hours ago
Lucy Humphreys I love the game but the sterile personalities bother me I think the game representing different social groups... View
Food & Wine 6

Stephen Saunders - 49 minutes ago
Look, I don't oppose this, it can never be remembered too often. But the first priority that needs it own Canberra memorial i... View
News 17

chewy14 - 52 minutes ago
Ha, that should read uninformed, not uninformed. BJ, on that link you've provided, have you actually read the ICRC report on... View
chewy14 - 1 hour ago
No, To be honest, It's because I think you're uniformed on the scope and causes of the problem, the research that has been oc... View
bj_ACT - 3 hours ago
I’m not just criticising this project from 2014, I’m criticising two decades of broken promises, failed projects and the... View
News 199

Jess Thomas - 55 minutes ago
David Deb Cossart that's the thing: people who can afford the fine can afford to speed. Changing this would mean that no-one... View
Liam Searle - 2 hours ago
Make the speed limit suit the road, change it back to 60! View
AliciaAnn Dowd - 5 hours ago
Werner Schenk I agree with you. There is already a system in place to assist people manage payment of their fines. SPER allow... View
Community 41