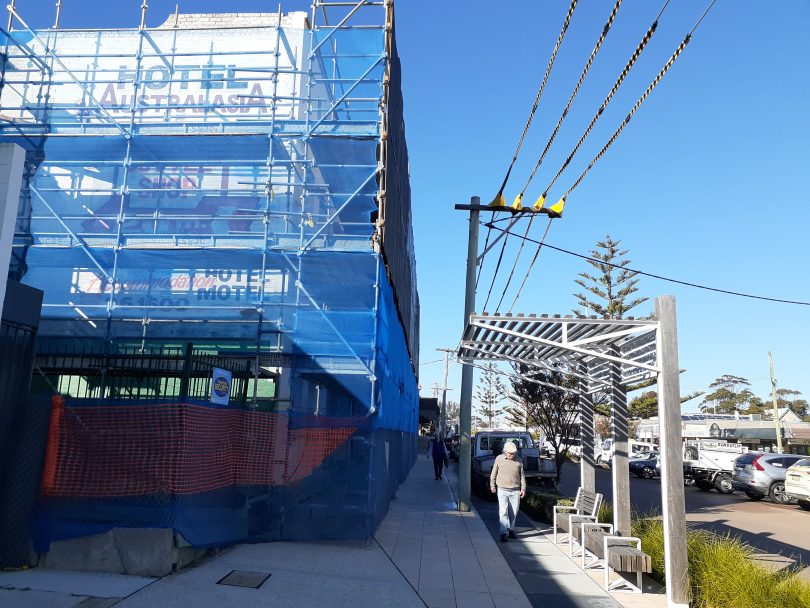 Scaffolding covers the facade of Hotel Australasia in Eden, with renovation work on the building in full swing. Photo: Elka Wood.

As Neil Rankin, owner of Eden’s Hotel Australasia, shows me around the old building – which is currently hidden behind scaffolding – he can’t hide his excitement, stroking the faded, apricot-coloured 1920’s facade.

“Before it came down a month ago, no-one had touched it since it was covered up in the 1950s, but it’s still in great condition,” explains Neil.

His grand vision is to see the facade shine again, including the hotel’s name in brickwork and a central orb, which will bring the building up by a further three metres. 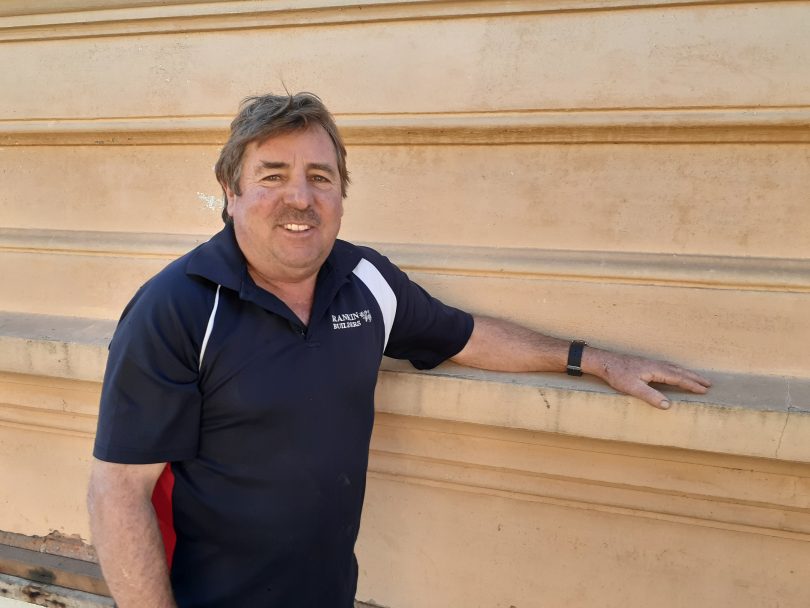 The original moulding was made it situ and trowled in wet concrete. To restore any damaged moulding, Neil will make tools in the same pattern and have his builders mimic the original trowling techniques.

Neil is even matching the facade paint colour, deepening it slightly to account for fading.

The long-term plan is to have an onsite brewery, a residence and seven rooms upstairs, with most featuring an original clawfoot bath and balcony access.

The current rooms are quite small by modern standards, so two rooms will become one to make space for queen beds and ensuite bathrooms. 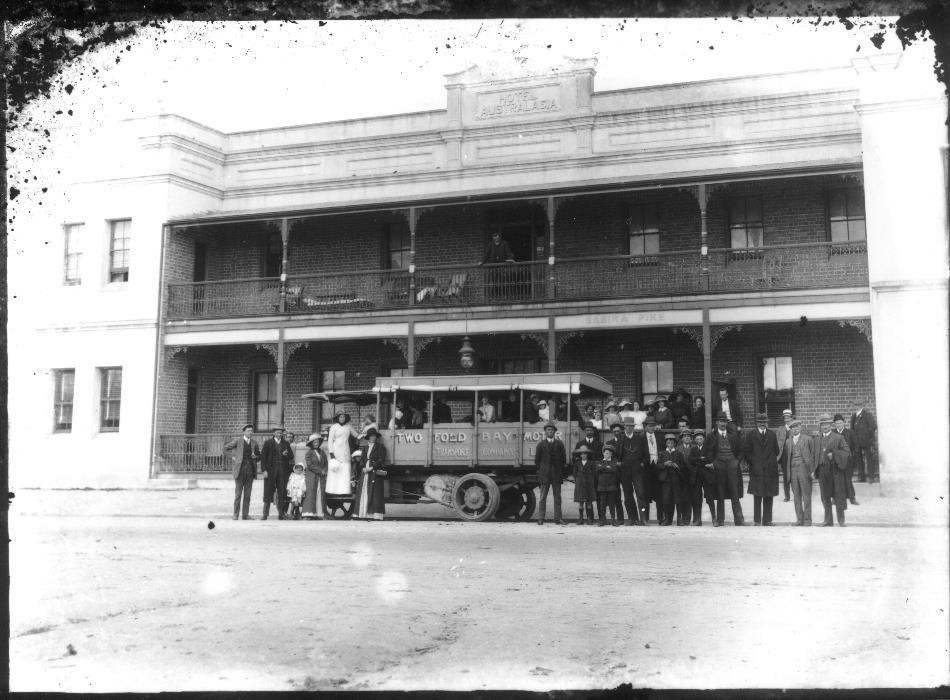 Neil won’t be running the hotel though, claiming he’s more comfortable “on the other side of the bar”.

“I’ve made it clear I’m restoring it to become lettable space,” he says. “I’ve got enough going on.”

Bega Valley Shire Council sold the building to Neil late last year, and he and his team of builders – which includes his two older brothers, cousin Steven and a revolving crew of interested friends and family – have been working at it ever since, aiming to reuse onsite materials as much as possible. 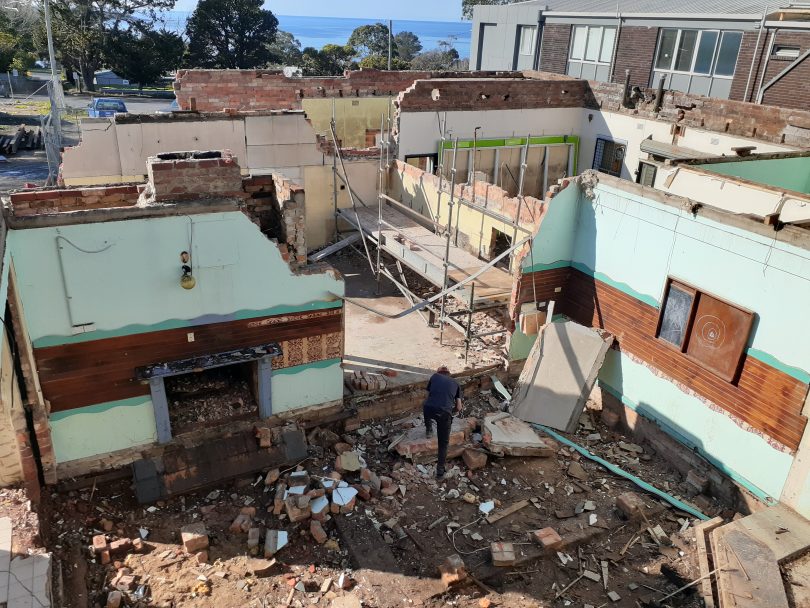 The plan is to transform Hotel Australasia’s old kitchen into a brewery. Photo: Elka Wood.

“It’s all labour; all the work needs hands and time, not necessarily money,” says Neil, showing off original copper plumping, sloppily painted over, which will be restored to become shiny downpipes.

The COVID-19 lockdown has been a boon for the project, as Neil and his builders weren’t travelling to other building jobs, including two supermarkets in Narooma and a big job in Goulburn.

“We’ve really been smashing into it during COVID-19 restrictions,” he says.

Literally, in some cases, as brickwork bound with lime is taken down brick by brick to be restored and floorboards ripped up, finished and replaced. 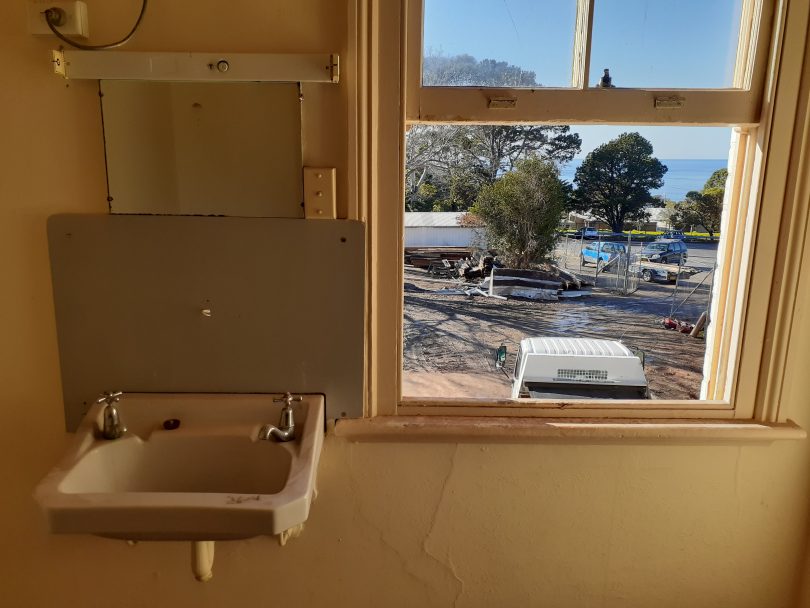 One of the original hotel rooms, complete with in-room sink. Photo: Elka Wood.

Even the pressed tin ceilings, long since painted over, will be painstakingly taken down and restored.

Walking around the majestic hotel, with crumbling brick underfoot, holes between the floorboards, crude graffiti on the walls, dusty glass and broken furniture stacked downstairs, it’s clear how much work is ahead.

But you also see gracefully curved doorways, a grand staircase and windows that open out to the blue sea. The place is pulsating with history and potential. 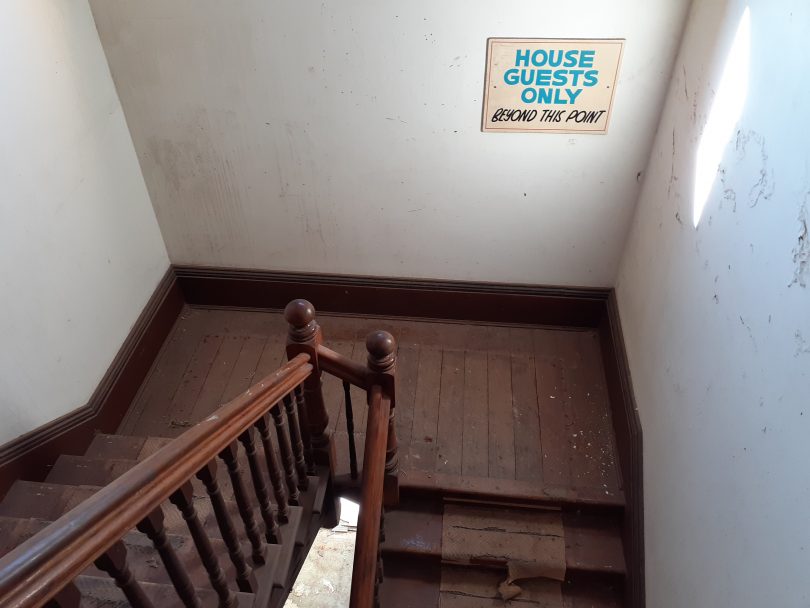 Neil and his crew will refinish and reuse much of the building’s original timber. Photo: Elka Wood.

Even at this stage of the renovation, Neil is discovering new things, such as a carefully plastered over fireplace in the upstairs kitchen, which will become a hotel room.

“I saw the fireplace in old photos but couldn’t work out which room it was in until we started taking out walls,” says Neil. “This will be a very special room.” 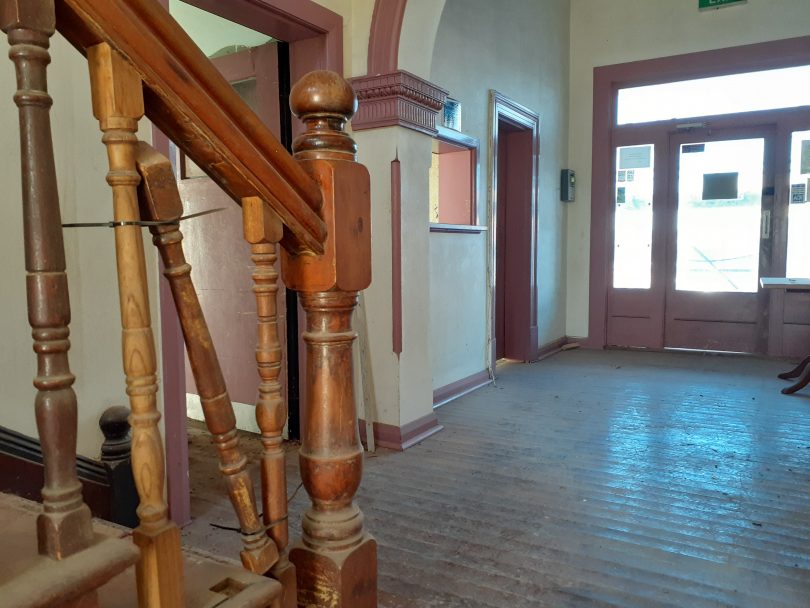 Even after the bones of the renovation are finalised, there will be months of finish work but Neil says that although he hasn’t had time “to come up for breath”, he’s enjoying every stage of the project.

The development application allows nine months for planning and a further two years to finish the build. Neil hopes to reveal the facade later this year and finish the project by Christmas 2021.

Craig Webb - 14 minutes ago
Greg Donoghoe thats well and truely faster than an old plastic cab with a gardiner straight 8 in it! View
Greg Donoghoe - 19 minutes ago
Yvoir Hingee maybe you need to give it a try now. Very enjoyable way to travel to Sydney. No traffic to put up with & very co... View
Tim Vandartel - 58 minutes ago
Time to get back on track. High speed trains please. View
News 34

Carol Treneski - 18 minutes ago
The team at the gym and pool worked with my Dad for years. He had Parkinson’s and Lewy Body Dementia. They helped Dad retai... View
Opinion 12

Neil Chandler - 21 minutes ago
Peter Bee true, but they produce some great players and there is a fanatical enough fan base that it would be a worthwhile ve... View
Rollersk8r1 - 2 hours ago
Quite happy as a GWS member. In normal times it’s an ideal arrangement. Four games a year at Manuka (1 pre-season), plus AF... View
Ben Jones - 3 hours ago
No one will go apart from the die hard fans. Until they start winning and the whole of the ACT become fans overnight. View
Opinion 1

Wilderness tour operators struggle back from the brink