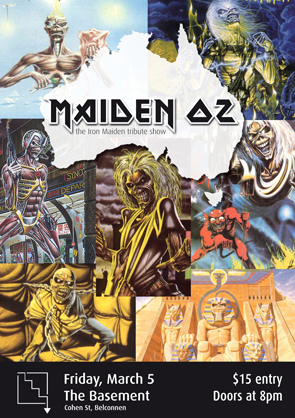 A huge set featuring all the Maiden classics, a special guest, and maybe even the odd sea shanty (Maiden fans will know what I mean).

A final note: the last Maiden Oz gig sold out very early, and there were a couple of ‘incidents’, with at least one latecomer assaulting the doorpeople in a remarkably stupid attempt to gain entry. If the band discovers that anything like this happens again, not only will you be denied entry, but I’ll make it my personal mission to ensure that you never see any metal shows in Canberra again … except for Stryper!

It’s pretty telling that none of those songs have been on the Maiden setlist for almost a decade.

It’s sad for Blaze, but Maiden hit a definite low point that included the 2 albums he recorded with them.

The recent return to form, starting with Brave New World, has been awesome and outshines anything that they produced during Blaze’s tenure (and immediately prior: Fear of the Dark and No Prayer for the Dying). It’s understandable that most people harken back to the glory days (everything up to and including Seventh Son), but IMHO the last 3 albums deserve much more respect than they generally get.

Surely the singer sounds like Bruce anyway. As an aside Flight 666 is the best Blu Ray I have purchased in a while.

Run to the hills!

Unfortunately no, PBO. But they will be in Sydney.

Oh well, nuts to that. I would only see them for shits and giggles anyway. Friday night should be great though. I really like the Basement, it brings back memories of when i was 16 sneaking into pubs with a firecracker permit as ID, my feet stuck to the floor then as they do now. Ahhh memories.

Unfortunately no, PBO. But they will be in Sydney.

I’ll save my money for the Stryper show I think.

Denise Bourke - 5 hours ago
More dodgy research on this eh? Like the research on having weed in family backyards? Kids form addictions without parental c... View
Iain Somerville - 11 hours ago
This is not just about the right to choose to die. It is also about Canberrans being classed as lessen citizens by being deni... View
David Newman - 11 hours ago
Linda, exactly. It’s as if the ACT’s and NT’s residents have a lesser right to self determination than residents of the... View
Lifestyle 8

James Forge - 8 hours ago
Ben Oostermeyer I agree. The usual excuses of transport costs and lack of competition don't wash when fuel that has to travel... View
News 10

kenbehrens - 9 hours ago
Government charges contribute towards the high cost of rent in Canberra. It's Government policy to increase Rates, to a level... View
Geoffrey Bell - 11 hours ago
Mandy Truman $206 cheapest share place i could find. https://www.allhomes.com.au/share/search?region=canberra-act&district=gr... View
Mandy Truman - 12 hours ago
I'm full time uni and I got made redundant from my job and then got a casual job but haven't had work for 10 weeks. I would h... View
News 246

Claire O'Brien - 9 hours ago
My sister broke her back on this same flying fox in the late 80s/early 90s. The drop is too high in areas. My daughter did na... View
show more show less
*Results are based on activity within last 7 days