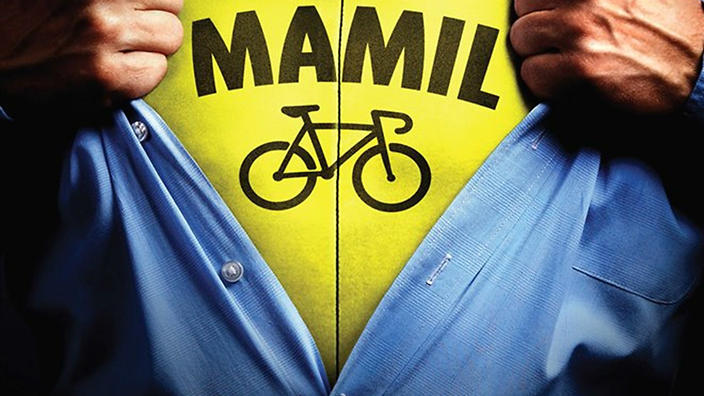 MAMIL or Middle Aged Men In Lycra is an Australian documentary that looks to uncover the various reasons behind the ever-increasing numbers of men that are pulling on the Lycra and hitting the road.

The documentary takes a personal look at what drives these middle-aged ‘Average Joes’ to become so obsessed with riding their bikes.

Along the way, physical and mental health issues are confronted which reveal there is more to this story of masculinity and male bonding than a first glance might reveal.

The film journeys through Australia, the USA and UK, looking to uncover the stories of bike-riding obsessed middle-aged men while following them on their Lycra-covered journeys.

The feature-length film explores many of the issues these men face while out on the road, including hostility towards cyclists and road safety.

A man who has experienced such driver rage is Kingsley Fiegert, who is a self-confessed MAMIL.

“Five years ago while I was riding my bike through the Perth Hills when a car pulled up alongside me. Some teenagers leaned out the window and shot me in the bum with a ball bearing fired from a slingshot, just for their own entertainment.”

Shaken by the incident, Mr Fiegert saw the need for a dashcam style device to record any incidents that cyclists like himself might face on the road. So he co-founded Cycliq, which is now the leading supplier of dashcams for bikes.

Cycliq Executive Chairman Chris Singleton said he saw the opportunity to support a documentary that shared similar views with their company.

“There are a few MAMILs in our Cycliq team and we wanted to support a film that is entertaining and funny, while still broaching some of the more serious issues cyclists encounter while doing the sport we love,” Mr Singleton said.

“Our Cycliq devices feature prominently in the film. We are a bike camera company, so it was a natural fit that we support a film about cycling.”

Mr Fiegert said that in the stressful world that men find themselves in, exercise and cycling is often a method to relieve stress.

“Men can find that cycling can help them physically and mentally and help them in their struggle to find the right balance in work and life.”

Distributors of the film, Demand Film CEO David Doepel said the docco looks at the many reasons why men take to the road.

“MAMIL looks at the reasons why men take to the road. It tackles male depression and speaks to the women left behind. It also demonstrates how important road safety is while cycling, making Cycliq the perfect company to join with us for this film,” Mr Doepel said.

The 104-minute feature, which is described as “witty, insightful, poignant and thoroughly entertaining”, is written and directed by Melbourne-based Nick Bird and Eleanor Sharpe.

Purchase your tickets to the one-off screenings in Canberra this Wednesday (21st of February) at Events Cinema Manuka and Hoyts Belconnen.

Are you a MAMIL? What are some of the issues that you have encountered on Canberra roads?

Jeremy Thomas. They’ve made a movie for you!

I can’t understand why there are MAMILS at all. It seems to be part of “the look” to wear tights (bike lycra shorts) sporting cycling logos.

I ride a bike and I just wear footy shorts or the CCC or adidas shorts. That’s how we rode bikes in the 1970s and early ’80s, bike lycras only came in around 1985. I’ve worn lycra bike pants but they are too uncomfortable on my dangly bits.

MelbaShed has a group of bike riders known as Very Old Men In Tights.
You work out the acronym.
😄