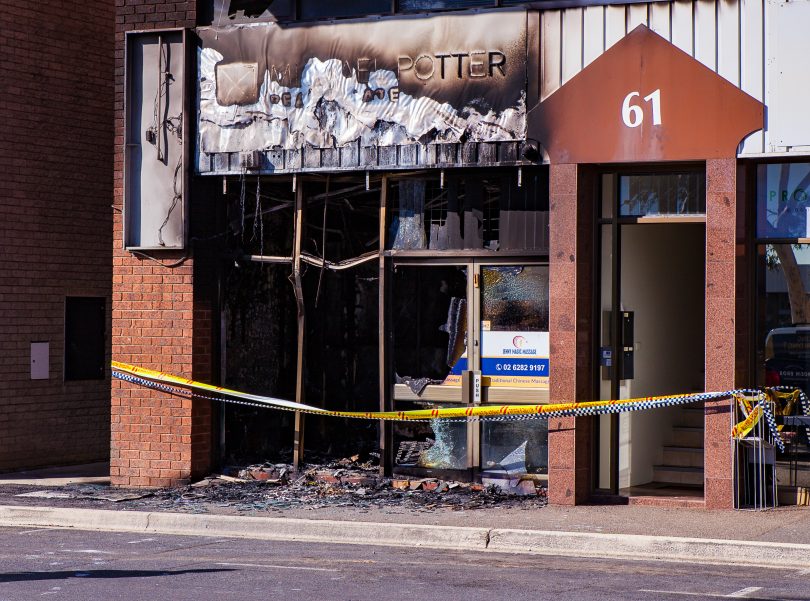 A 37-year-old man has faced court charged with arson over a fire which gutted a Phillip massage business last month.

On the night of 14 August, emergency services and police went to Jenny Magic Massage, a traditional Chinese massage parlour in Dundas Court, after reports that it was engulfed in flames.

Following an analysis of the scene, police and fire investigators believed the fire to be suspicious, and a review of CCTV footage showed a person throwing a flaming object through the window of the massage premises.

Phillip business goes up in flames after suspicious fire

Emergency services received a 000-call at 11:01 pm last night after reports that Jenny Magic Massage, a traditional Chinese massage parlour in Phillip, was engulfed in flames. ACT Fire and Rescue contained and extinguished the fire around 1:30 am. It is believed that no nearby property was affected but several neighbouring businesses have been forced to temporarily close this morning. Read the full story here: http://ow.ly/dzTP30lpqtUIf you have information or footage of an incident near you, email news@breaking247.com.au or send us a Facebook message.

Detective Acting Station Sergeant Mark Rowswell said the result of this investigation was assisted greatly by members of the public.

“This man has been identified from a number of CCTV images provided by nearby businesses in Woden, and we would like to thank those who provided footage for their assistance in this matter,” he said.

The 37-year-old man was remanded on Thursday (6 September) to next appear in the ACT Magistrates Court on 27 September, 2018.

Di Green - 7 minutes ago
I so enjoy these gardens View
Vee Bee - 3 hours ago
We miss it so much :( View
Community 28

Sarah Handley - 15 minutes ago
Meredyth Wendel how will the cygnets cope lol View
nobody - 57 minutes ago
Who in their right mind thinks all 10,000 plastic ducks will be recovered? View
JS9 - 3 hours ago
Where does it suggest anywhere they are just going to be left to wander down the river after the race is over? View
News 12

JC - 21 minutes ago
Correct death rate has not been the same as the flu. For one reason and one reason only and that is because we have restricti... View
JC - 27 minutes ago
It’s been standard practice through the pandemic. Rightly or wrongly. View
Maya123 - 41 minutes ago
Twas always the way. I have seen an old death certificate where a long term medical condition was mentioned, but the cause of... View
Opinion 45

Slim Hunter - 51 minutes ago
Natives or weeds that require watering?🤔 View
Jim Andrews - 3 hours ago
Nathan Burraston With respect my friend, you dont know what you are talking about. First up you cant just plant a tree anywhe... View
Sport 17

chewy14 - 4 hours ago
Whatwik, You act like the lockdown has no negative health consequences of its own. Perhaps have a bit of a longer think about... View
News 62

A Canberra doctor who prescribed her patient and partner 450 Ritalin tablets in 13 days has been suspended from practising....
News 12

UPDATED 3 pm: The ACT Government is hopeful that the Territory can be COVID-normal by Christmas and is betting on its...

@The_RiotACT @The_RiotACT
Chief Minister Andrew Barr has outlined Canberra's roadmap back to normality. Sadly, it comes on the same day the ACT recorded its first death in this COVID-19 outbreak https://t.co/u9YifU91kZ (49 minutes ago)