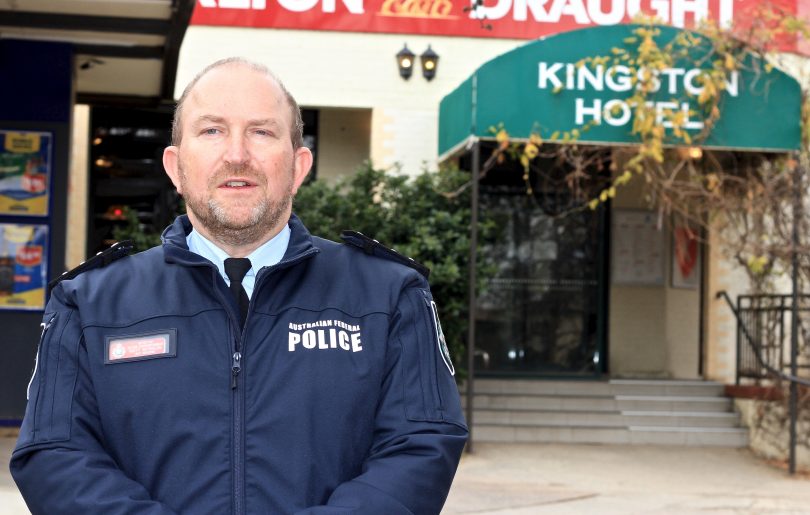 A 44-year-old man is dead following an altercation with another man at the Kingston Hotel on Sunday night (5 July).

Paramedics from ACT Ambulance, staff at the hotel and police provided assistance to the man following the incident, but he was pronounced dead at about 9:15 pm.

The incident occurred inside the hotel. About 20 to 30 people were present at the time.

No one has been arrested and police are urging anyone they haven’t yet spoken to who was present at the Kingston Hotel to contact ACT Policing or Crime Stoppers on 1800 333 000, or via the Crime Stoppers ACT website.

Detectives from ACT Policing are continuing their investigation and have spoken to a number of witnesses while also reviewing a large amount of CCTV footage of the incident.

Police are also investigating whether the two men were known to each other.

Detective Acting Superintendent Matt Reynolds confirmed that no weapon or glass was involved during the altercation.

“We’re still reviewing the CCTV footage. We are also still speaking to all of the witnesses and staff at the hotel,” Detective Acting Superintendent Reynolds said.

“Obviously, this is a very distressing incident for members of the public and staff and we are still seeking anyone who has further information.

“We could speculate that there probably was alcohol involved, but we are unable to be sure of the exact cause of the incident at this stage.”

Detective Acting Superintendent Reynolds said they are also making enquiries regarding where the two men live and it is not known if they are from Canberra or interstate.

Forensic investigators from ACT Policing are still investigating the nature of the deceased man’s injuries.

Police are also in the process of informing the deceased man’s relatives of his death.

Julie Marshall - 5 minutes ago
After the fight ppl did so McDonald’s couldn’t get it you have now dropped the fence ;(... View
Christine Cole - 3 hours ago
Yes it is Sharon Merten. Big and long fight. Proud of their resilience and determination. Also proud of making a big decision... View
Tori Hyde - 5 hours ago
So very sorry to see this great place close. Best schnitzels and cutlets around. View
Opinion 27

Anthony Beck - 8 hours ago
Why can some training companies continue face to face training, and in a classroom environment, but transport training cannot... View
kenbehrens - 9 hours ago
Roy, I've always been concerned about the active type of exerciser. The runner, the cyclist etc and how that type of activity... View
Kari James - 9 hours ago
I would find this job incredibly difficult and stressful - great work team! View
News 22

chewy14 - 9 hours ago
Yeah, almost none of what you just said is true. The Astra Zeneca vaccine is extremely safe and equally as effective as Pfize... View
skipper - 11 hours ago
Barr only cares about his own political profile, not his citizens. Three states have opened up eligibility to Pfizer for over... View
News 5