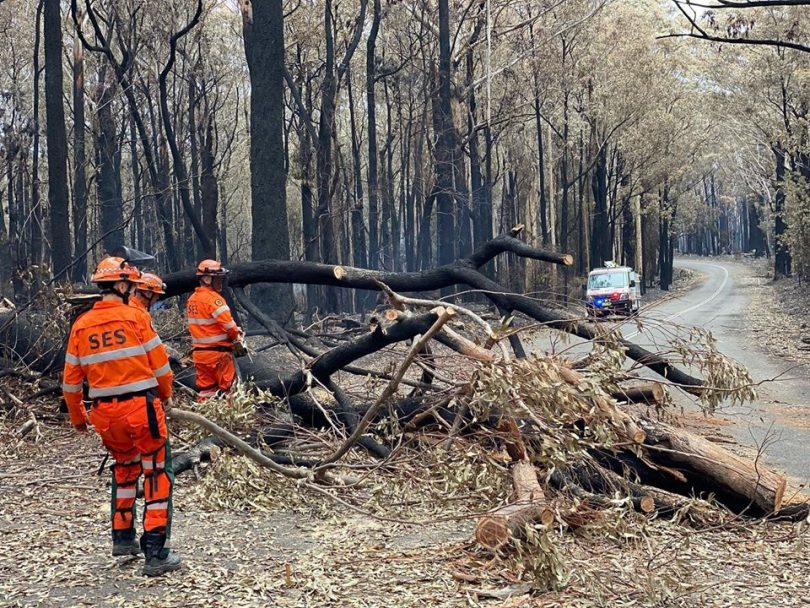 SES crews from the Shoalhaven and Eurobodalla are helping in the event to clear and reopen roads impacted by bush fire, seen here on the Princes Highway at Benandarah. Photo: Batemans Bay SES Facebook.

A man has been charged for refusing to comply with police direction after trying to access a closed, bushfire affected road in the area of the vast and long-running Currowan Bushfire north of Batemans Bay.

At about 10:15 pm on Saturday (December 7), police report that a man was driving his Toyota Landcruiser south along Woodburn Road, west of Milton, towards a closed-off road.

The road closure was manned by two council employees and two police officers who were all wearing marked high-visibility clothing.

The man continued to drive towards the road closure and nearly collided with one of the council employees.

He allegedly braked heavily and continued to drive forwards slowly, forcing the council employee to take several steps backwards to avoid being hit.

Police intervened and spoke with the man, who allegedly refused to provide police with his licence or details and refused to leave his vehicle.

As a result, the man was placed under arrest and removed from the vehicle.

One of the police officers sustained minor grazes as a result of the arrest.

The man was taken to Ulladulla Police Station where he was charged with not obey direction of police/authorised person, disobey road closure sign and resist police officer in the execution of duty.

He was granted conditional bail and is due to face Milton Local Court on 16 January 2020.

The Currowan Fire has so far consumed close to 80,000 hectares covering bush and private property and is currently listed as being ‘out of control’ close to a month after it started.

Use Register.Find.Unite to register, find and reunite with family, friends and loved ones after an emergency.

Carl Ostermann - 17 minutes ago
In the nineties, it was adventurous gnomes sending their owners... postcards from all over the world View
News 30

Barbara Boswell - 56 minutes ago
Definitely hope so. Love V8s.... View
Dale Brittain - 1 hour ago
Choco Munday i experienced them first hand. I understand what you are saying View
Choco Munday - 1 hour ago
Um....no. The green lobbyists had the ear of government then, and they will oppose this now, even more fervently. The inner c... View
News 33

Dealing with the fifth season: bushfires in Australia