The news came in last night that the unnamed 15-year-old alleged to have been driving the car that hit Clea Rose has been charged with manslaughter on top of the charges relating to the stealing of that car as well as some other vehicles.

The Canberra Times also carried the story this morning. They also said Ms Rose’s sister had accused ACT Urban Services of removing the flowers and tributes left in the bus interchange for Clea. Urban Services denied this.

ED UPDATE: Tributes removed were such as this one captured by Loadedog. 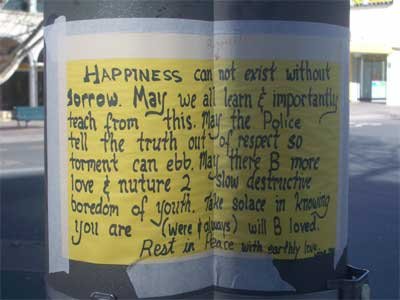 FURTHER UPDATE Emma Renwick from Stateline has written in with a different interpretation of the part about flowers and tributes being removed.

She says Zoe Rose did not accuse anyone of anything. She said the lines in the CT story “Ms Rose’s sister, Zoe, said flowers put on a light pole by her family were removed within two days. She asked that people leave any flowers there” were probably based on an interview she (Emma) did with the Rose Dunn family last Monday, which a CT journo also attended.

The full transcript of this interview is here and the relevant section is below.

ZOE ROSE: On the day that Clea died we put flowers at the place were she was killed.
FRANCES ROSE: So that people would know.
ZOE ROSE: Yep, so that people would know.
FRANCES ROSE: And to commemorate her.
ZOE ROSE: And they were gone within two days. And then her boyfriend put up more flowers and they were gone, lots of her friends and other members of the family have gone and replaced them and there’s a light pole in civic now, which has a lot of sticky tape on it but no flowers.
ROSS DUNN: I think someone has been very zealous in doing the clean up which could be done a bit more sensitively.
ZOE ROSE: We would appreciate it very much anyone who sees flowers on a pole…
ROSS DUNN: Just leave them there please.
ZOE ROSE: Just leave them there; we would really appreciate that a lot.

Now that still sounds to me like the family is (rightly) annoyed at the flowers being taken away and I assumed, on reading the CT article this morning, that because Urban Services had made a statement saying it was not them, the family’s annoyance must have been directed at them.

This scumbag took a young life from her parents and friends that loved her so much. 15 or not he should forfeit his life for the agony he has caused. Put him to death. End of story.

Obviously the powers that be didn’t like the thread, it’s gone from the saved draft, and I’m not rewriting it.

I’ve been cited on changing threads into intellectual conversations regarding levels of illiteracy and the resultant dialogue, and am not about to start here.

btw, why is B unacceptable, but IMHO acceptable?
What’s more important – The content or the presentation. The handwriting is neat, but the content and message is priceless. b good, and STFU about abbrev. 🙂

Forgiveness and vengeance (should) have little to do with justice.

Maybe its a Police cover up and that the kid was really 15 all the time.

I still think their anger is misdirected. They have already forgiven the kid in the stolen car so why would a Judge sentence him harshly.

I’m retty sure the government started up some scheme where spots where accidents had happened are marked by either a red or black post depending on if there was a death or just a serious injury. Does anyone know of this is still going?

And Sam, I did think I’d heard he was 14 before but I was just going by the ABC story, figuring they were in a better position than me to check the facts. Maybe one of his aleged accomplices is 14.

Perhaps, in my humble opinion, it is an abbreviation of be.
Proper English is, has, and always will be whatever is in common use: the vernacular if you will.

Hows the shark looking from up there boys?

There’s too many people on this planet anyway, so we need a few car accidents to cull the population back every so often. And I agree with the comments about removing those memorials alongside roads: they annoy the crap out of me. Maybe the Comrade can build a memorial to road accident victims so people can write their crappy poetry and leave teddy bears, etc???

I dont have a happy happy world bubble. I’m just saying that people can PREVENT THEMSEVLES from speeding and driving Commodores. Ok? Not the govt, not community campaigns, the people themselves.

LG – I think you will find that despite decades of social engineering and draconian civil liberty infringing campaigns, road deaths still occur.

hence 100% preventable is simply not true.

“road deaths are not 100% preventable. unless you defy the laws of physics combined with human stupidity and or carelessness.”

Bonfire: That’s what I’m talking about: Human stupidity and carelessness. Preventable. Now shut up and stop shitting me.

and maelinar – I think you mean you would respect it bettera if it was written in england….youse

road deaths are not 100% preventable. unless you defy the laws of physics combined with human stupidity and or carelessness.

people die all the time in all sorts of places. we have a place for markers, they are called cemeteries.

anyway, im glad the person has been charged. although being a juvenile and in canberra, expect a slap on the wrist.

if i was a criminal mastermind, id make my HQ in the ACT.

Maybe we should remove street signs as well… and they are designed deliberately to distract the eye.

Females should not be allowed within fifty metres of the road if wearing revealing clothes. This too is distracting.

I would B happier if somebody could B kind and spell check the B@#$ sign before it is graciously removed by Urban Services. B4 they put up the signs perhaps they could B kind enough to attend school to learn that B is actually spelt be. I know I would certainly respect the sign more if it was written in english.

Then again IMHO all signs not relating to the usage of roads should be removed, as they distract drivers, crosses included.

Jeff Smith - 10 hours ago
Nailed it! If the ACT Government employed active and skilled inspectors to properly audit buildings during construction we wo... View
Rohan Peek - 10 hours ago
If they were built properly in the first place the strays and body corps wouldn’t have half as many issues View
Jean Hardy - 13 hours ago
Vicky, are you formally exx manger from pacific place appartments View
Opinion 1

grim123 - 10 hours ago
In plenty of cases, children should be removed from abusive or dangerous environments much more quickly. Working on keeping c... View
Motoring 14

@The_RiotACT @The_RiotACT
The National Multicultural Festival is on this weekend, but that's not all - see what's coming up in our weekend guide https://t.co/cqh8qP5LMJ (39 minutes ago)