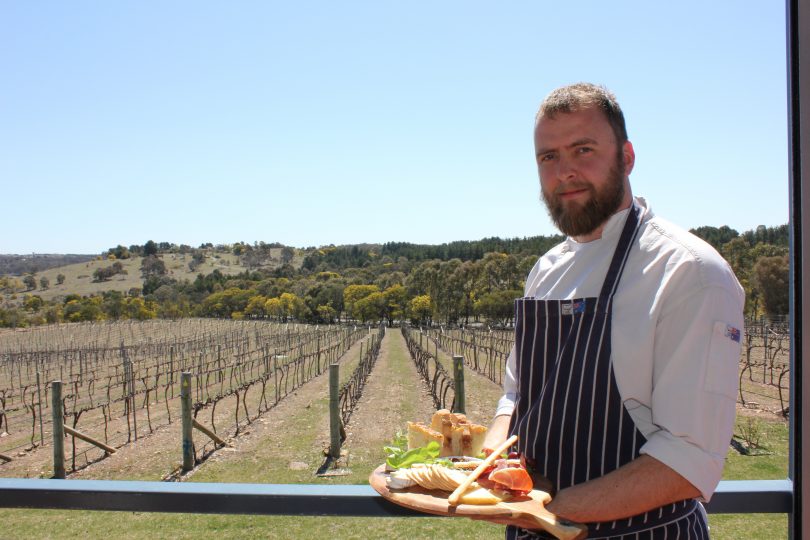 Thirty-five minutes outside of Canberra, tucked behind an extended driveway lined with green and yellow flora, is Contentious Character. A wine-themed eatery in the middle of Wamboin, New South Wales that specialises in everything delicious with a twist.

Culinary Director, Tom Stoneham develops and designs the menu at Contentious Character which is inspired by his British background and love for Australian ‘wild’ ingredients.

“I’m always on the lookout for new and interesting ingredients that I haven’t heard of or tasted…On the next menu, I am trying to have every dish with at least one interesting element that is either a local thing or a new ingredient that people don’t know about or something native. So with every dish I’m trying to tell a story.” 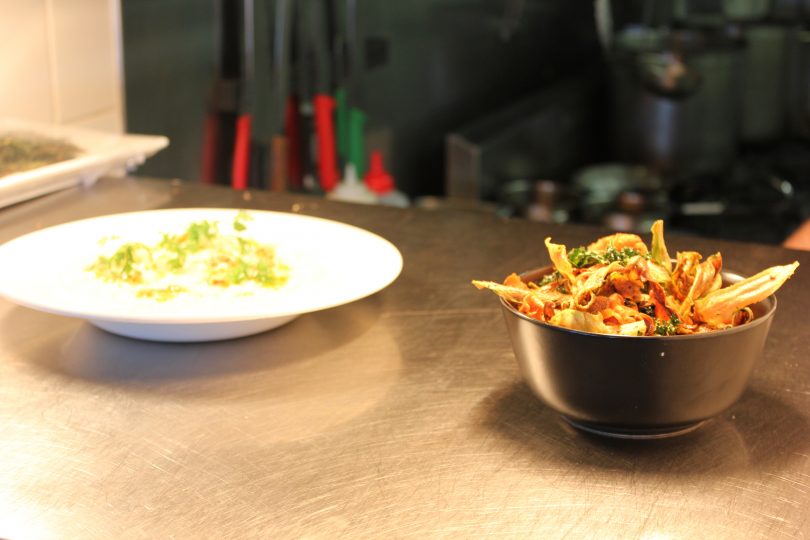 Having joined Contentious Character just after it opened in 2016, Tom is fond of its evolvement and dedication to sourcing local produce. Tom has been building a relationship with food ever since he left school, starting out at a local Italian restaurant in the UK back in 2001.

“I went from washing dishes to in about a week or two preparing entrées and salads and stuff and then I decided to do an apprenticeship in food. I have always enjoyed planning food at home. My grandma taught the first recipe I ever learned which was pancakes when I was seven years old. I still make pancakes with that recipe now. I have had it in my head for 20 years!”

Having moved to Australia over seven years ago, Tom seems to have finally found his niche at Contentious Character because the eatery offers food as an accessory to the breathtaking vineyard below.

“Being a winery, I am trying to really play off that with all the food. I use the wine in lots of different dishes and also other little nods to the fact that we’re a vineyard. We’re a winery first and food supports that.” 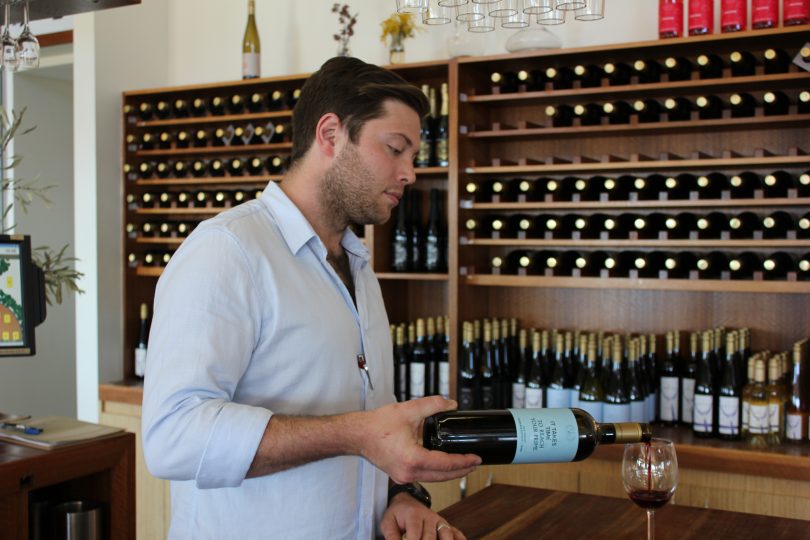 While majority of chefs might pair a wine with a specific dish, Tom says he works the other way around, preparing dishes that can be paired with the wines already available at Contentious Character.

Wine is also an exclusive ingredient in many of the offerings on the menu. The duck liver pate, for instance, is made with a bit of port from the cellar which is made in-house by the Contentious Character team. But that’s not all:

“We’ve also got stuffed vine leaves as an entrée. It was a new idea I had this season. As soon as we get young leaves out there on the vines we go out and pick a couple of thousand leaves and brine them so we can roll our own vine leaves.” 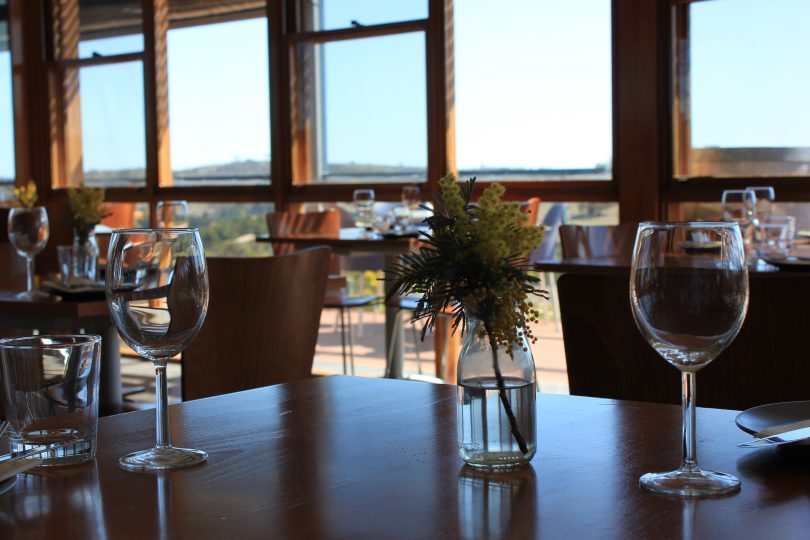 Wine and dine with breathtaking views of the vineyard. Photo: @zees.grams

The menu at Contentious Character is a love-letter to great Australian ingredients and wines, adding an authentic twist much like the name itself.

“The meaning behind the name Contentious Character is kind of around how Canberra is the home of contention. How Canberra only exists because Australia couldn’t decide what the capital should be out of Sydney and Melbourne, so they settled for half-way in between.”

With Parliament also being iconic to Canberra, Contentious Character owners Ross, Tony, Ben, and Jeremy considered the capital to be the home of debate. This became a nice reflection on how people talk about wine as well: “Everyone has an opinion on wine and there’s not necessarily right or wrong. It’s always contentious. “

It may also be contentious deciding what to order from the finely developed menu at this wine-and-dine establishment. We started off with the house made vegetable crisps that are not only crunchy and wholesome, but packed with flavour and colour.

Then out came the herby mushroom arancini balls which can only be described as the crispiest balls of rice and mushroom you’ll ever come across. While tanned and crunchy on the outside, the inside remains soft and flavoursome- an offering that reflects Tom’s strong Italian culinary background. 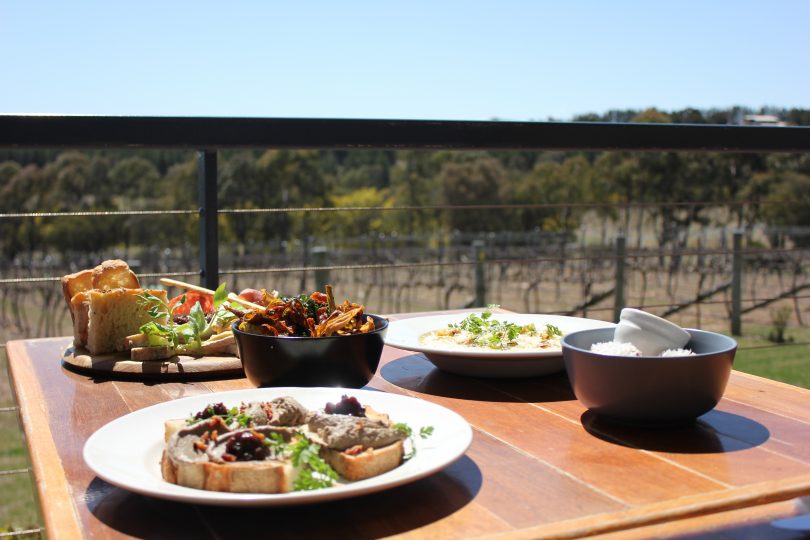 Crispy arincini balls, tangy risotto and tangy pate are only some of the items to choose from. Photo: @zees.grams

While meat-eaters will be lured by the crowd favourite, stuffed and wood-fired free range pork belly, vegetarians can opt for the cauliflower risotto which looks simple on the outside but is bursting with tang on the inside.

For those simply looking to snack on cheese and wine on a Sunday afternoon, Contentious Character have something for that too.

“We have cheese and charcuterie boards which will always be on the menu because it’s just such a perfect food to have with wine. We source lots of nice Australian cheese as well as a few Italian and French cheeses and just present them with fresh fruit and bread and house-made preserves.”

While the menu is in itself impeccable, Contentious Character is open and welcoming to people with special dietary requirements, including providing gluten-free and vegan options.

“We have a few vegetarian options on the menu but we get different dietary requirements every week. I tend to come out and talk to the customer and see what their specific needs are and what they like and then I’ll come up with a dish that suits them.” 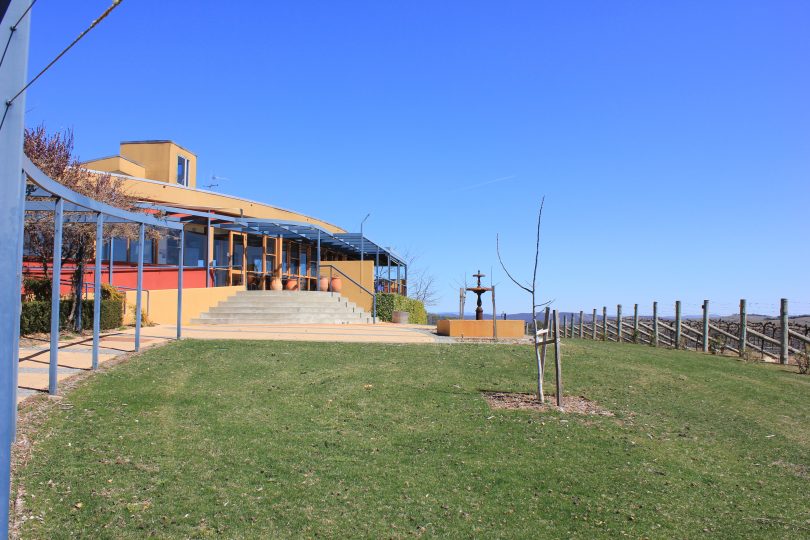 Contentious Character is a 35-minute drive from Canberra. Photo: @zees.grams

While not only offering quality food, wonderful service, and fine wine, Contentious Character will also leave you with an experience to remember. Now also working on growing their own produce, this isn’t the last you’ll hear of this little vineyard making a name in Canberra.

For Tom, the future remains at Contentious Character, a place where he can create happiness doing the thing he loves most.

“I see my job as how do I get happy customers… how do I make people happy. I want them to enjoy the food that I make.” 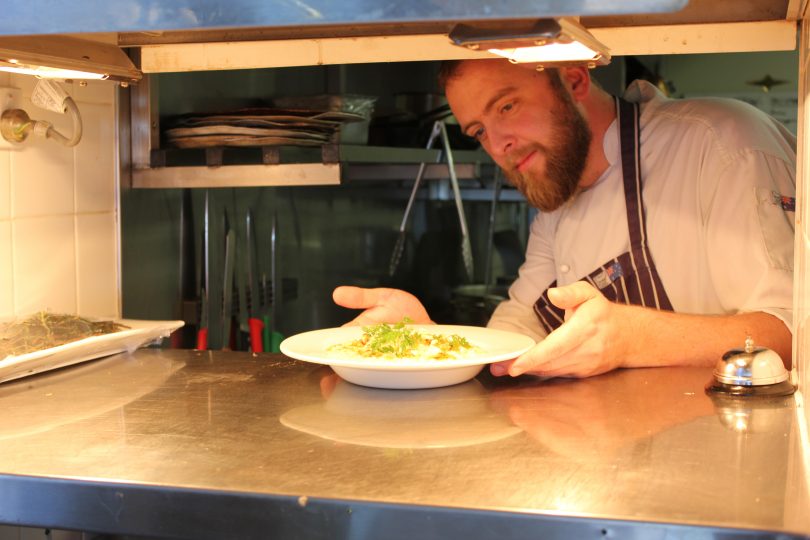 Rachel Edmondstone - 5 minutes ago
Liv Miller what a beautiful heart these people have! These are big, BIG things to women in need 🌻 Well done to the whole t... View
Juanita Tee - 9 hours ago
David Keir what are you specifically doing for them 🙃... View
Liv Miller - 11 hours ago
Rachel Edmondstone love 💓 this View
News 11

Cooby Pedy - 34 minutes ago
mazzie agree with you 100 percent in the .meantime these bloody climate alarmist keep spreading there false BS about renewabl... View
Peter Kline - 2 hours ago
Tony Armstrong great news. View
Mazzie Woodward - 9 hours ago
We don’t have a working hospital and they are building a giant battery 🔋 does anyone else find this utterly ridiculous? View
News 161

chewy14 - 9 hours ago
Nobody, Interestingly, one year later, that number is down to 100 under construction or "planned", with another 300 "proposed... View
whatwik - 14 hours ago
There's certainly a nuclear reaction from the usual suspects here any time renewables are mentioned. View
Futureproof - 15 hours ago
Nuclear - the Greens say no New hydro dams - the Greens say no Windfarms in remote areas - Bob Brown says no... View
Property 28

whatwik - 15 hours ago
Hope they were able to find their own towel (not to mention undies) more easily than this lot - https://www.abc.net.au/news/2... View
Breaking 3

Not that long ago, my partner and I were part of the teeming masses of young people trying to get...
Community 50

@The_RiotACT @The_RiotACT
A mishap at the Murrumbidgee Country Club put half the greens out of action, but general manager Ray Duncan says the club will be back better than ever https://t.co/U6mM0hq6S0 (24 minutes ago)