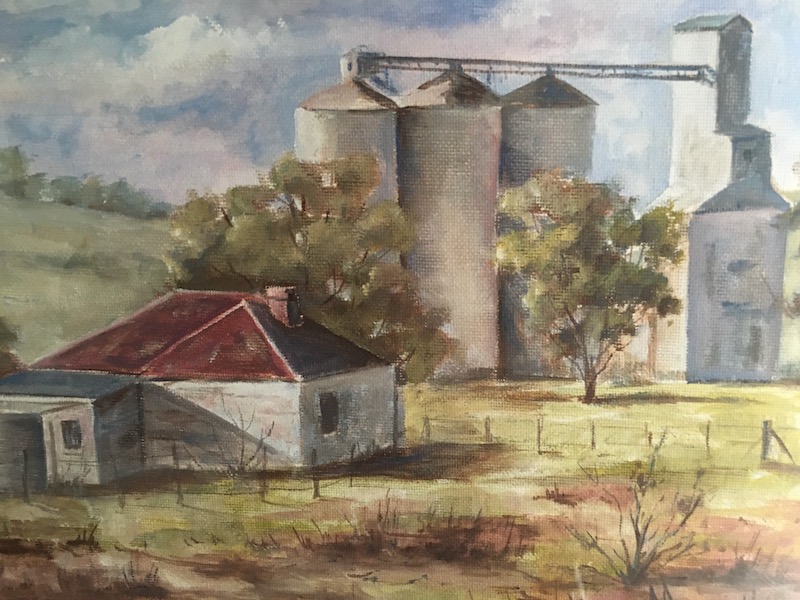 People’s enterprise knows no bounds in the Harden farming community. At the peak of summer’s annual harvest, when drivers waited in the blazing heat to unload their wheat at the Cunningar silos east of town, children would go from truck to truck selling them icy-cold drinks.

About five years ago the imposing concrete silos and rail siding inspired landscape artist Cathy Pearsall to paint the tranquil scene above. The Yass landscape artist photographed the silos, completed the painting at home and sold it at Bowning’s Rolloninn Café.

In good seasons Cunningar holds up to 105,000 tonnes of wheat and canola. The site bursts into action at the annual harvest when the district’s farmers begin unloading their grain for delivery by rail to Port Kembla for export and domestic markets.

That local enterprise was invaluable when Cunningar needed to be upgraded because its aging infrastructure was becoming too inefficient for grain handling company GrainCorp and busy farmers flat out with harvesting. Railway wheat wagons would be hauled out to Cunningar siding from Harden 10 at a time. Loading grain onto a train’s wagons took two days. On the main southern railway line between Melbourne and Sydney, every other train had priority ahead of Harden’s grain trains.

Growers Barry Alcorn and Tony Flanery realised that if Cunningar was not upgraded it would eventually close, leaving farmers an unpalatable choice of alternative sites to unload their grain, at either Cootamundra (about 40 kilometres away) or Temora (about 83 kilometres away). No one could afford the extra time and costs.

“We agreed we would rather pay our own money to have Cunningar upgraded than see it downgraded,” Barry says. Another grower, Pat O’Connor, joined their efforts for urgent action.

They called a meeting of all the growers who agreed to a levy to raise $1 million towards the upgrade. Since then GrainCorp, the Australian Government, Hilltops Council and the Kruger Trust, a generous legacy bequeathed by a dentist, the late Geoff Kruger, have contributed more than $8 million to upgrade the siding’s infrastructure. Rail sidings were extended and axle weight capacity strengthened from 19 to 25 tonnes. New conveyor lines, storage bins and spouts were installed, capable of loading trains at the rate of 1000 tonnes per hour.

“Now a wheat train can be turned around in 24 hours to Port Kembla,” Barry says. “The new work has cut farmers’ handling costs by $8 to $10 a tonne. In a good season, when about 100,000 tonnes flow through the siding, growers will save about $1 million,” he says.

Of course, the sticking point since the work was completed in 2017 is the drought.

This season, yields are about a third of what they are in a good season, which means farmers must wait for their savings to be realised. 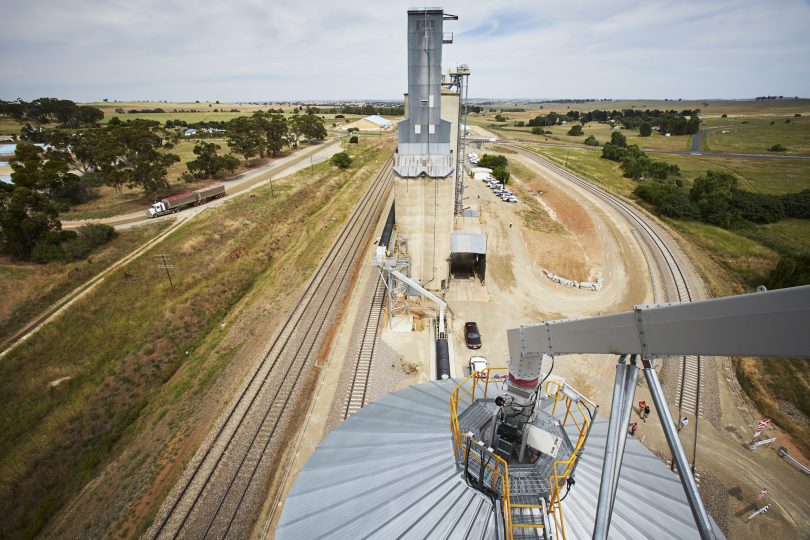 Some of the new infrastructure at Cunningar, east of Harden-Murrumburrah. Photo: GrainCorp.

Cunningar is attracting grain growers from a wider area around Harden, Boorowa, near Cootamundra and Young and all the way down to Goulburn where district farmers in recent times have been growing wheat and canola.

“You have to have big, efficient trains. A lot of private grain handlers such as Cargill’s like using Cunningar to run their grain to Newcastle because they can get a more competitive rate,” Barry said. This means the siding is busy, providing work even in these dry times.

“Even today I have seen 12 to 14 employees there. If the site disappeared, they would not be coming into town to spend money. Someone is there all year-round. In good seasons it helps kids on holidays from university earn money for the year ahead. This is not all about the farmers, but for children’s education and all sorts of other reasons,” Barry says.

Each harvest the more efficient site will move thousands of tonnes of grain back to rail, removing an estimated 4,000 truck journeys from local roads, according to GrainCorp, reducing wear and tear and increasing safety for local communities.

It’s a massive win for the community on multiple fronts, especially when the drought is over and yields pick up. Growers are accustomed to waiting out droughts and know they now have a long-term asset that makes the district more competitive with the lowest freight rates in NSW for the export market. Low enough that GrainCorp declared the Cunningar project had set the benchmark of how public, private and growers could come together to deliver a fantastic outcome for the whole community.

@The_RiotACT @The_RiotACT
How long since you've gone out for authentic Mexican food? Mochachos is bringing the heat to Kingston https://t.co/lsjPa6sCey (17 hours ago)