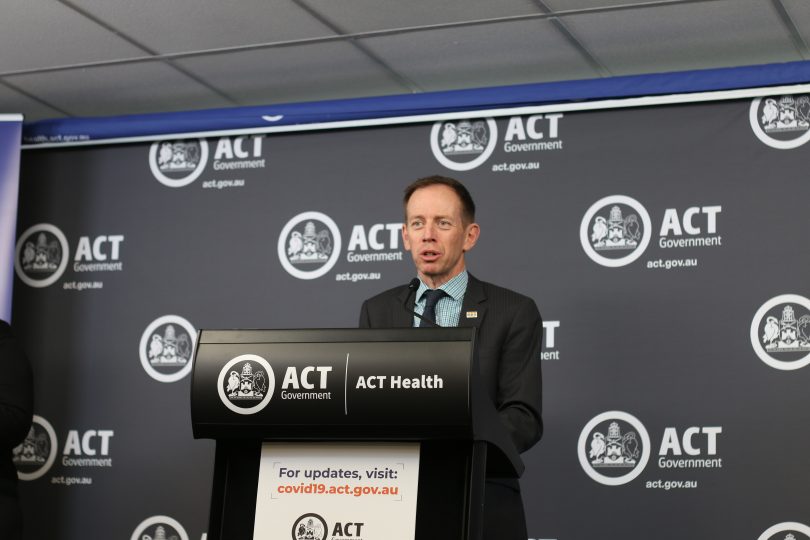 The ACT Government has foreshadowed a mental health stimulus package as early as this week after Lifeline called for help due to an unprecedented amount of calls fuelled by COVID-19.

Lifeline received almost 90,000 calls in March – the most in its 57-year-history – prompting the crisis support service to launch its first national emergency appeal.

Lifeline has seen a 25 per cent jump in calls from the same time last year. COVID-19 now accounts for every second call.

Minister for Mental Health Shane Rattenbury says the culmination of two unprecedented disasters this year has led to the deterioration of mental health across the community.

“From a mental health point of view, it has been an extraordinary year and I think that has put a lot of mental strain on our community,” he said.

“If we go back to December and January with the smoke and bushfires in our city, it has been a hard year for Canberra and we are very conscious of seeking to support our community in terms of mental wellbeing.

“I have seen the numbers from Lifeline and they were already experiencing an increase in calls as a result of the incidents earlier this year and now COVID-19 is obviously driving significant levels of anxiety in our community.”

The ACT Government initially provided $100,000 to Lifeline through its first stimulus package which funded an additional 1,000 calls. An extra $2 million was set aside for mental health services under its second economic package.

Suicide is the largest cause of death for Australians aged between 15 and 44 years. Suicide rose 10 per cent last year for men aged between the ages of 15 and 24 years.

Suicide rates tend to increase during times of economic uncertainty and austerity, and young people are bearing the brunt of the COVID-19 induced economic devastation, making up a high proportion of casual workers in the industry’s most affected such as hospitality.

Many people are experiencing financial hardship and unemployment as a result of the #COVID19 situation. Know that it’s not your fault. This global pandemic is affecting the whole world, and you don’t need to go through it alone. Help is always available https://t.co/kPv0IDmGA7 pic.twitter.com/SaeyptrBme

It is a trend that has not escaped the attention of governments. Australia’s mental health ministers held a consolidated meeting for the first time on Friday afternoon to address the issue.

Mr Rattenbury has also been receiving feedback from the community as to how the ACT Government can best target help to those who need it the most.

“In terms of broader mental health issues, I met last week with the CEOs of about a dozen of Canberra’s leading non-government mental health organisations and we had a discussion about some of the gaps and what some of their needs are,” he said.

“I expect to be able to make an announcement shortly about where the government is going in terms of support but we are looking very closely at the mental health needs in our community.”

But any announcements and support will have to be sustainable over the medium to long term, Mr Rattenbury said.

“I think the key point with mental health is, while things have gone up in the short term, we are going to be in it for the long haul. This is not going to suddenly go away. It is going to be an issue right through this year,” he said.

“We know we need to have a long-term response when it comes to mental wellbeing and that is the planning we are doing at the moment.

If you or anyone you know needs help, you can also contact Lifeline on 13 11 14 for 24-hour crisis support. If you or someone you know is in physical or life-threatening danger, call triple zero (000).

There are also dedicated mental health and wellbeing resources on the ACT Health COVID-19 website you can access here.

Unbelievable, my daughter is still waiting for a call back from her mental health dr after speaking to her worker over a week ago

Lee McDowall that is dreadful. We only reach out when we need help - now. Hope she is ok.

Futureproof - 6 hours ago
The roundabout at Monaro Highway/Isabella Drive is particularly dangerous with the height of the grass. You should be able to... View
Capital Retro - 6 hours ago
That would be tantamount to the cosseted cyclists in Canberra who get free bike tracks and then complain that they can't use... View
bigred - 7 hours ago
Of course, both sides of politics could encourage interested and motivated residents to "adopt a patch" and reduce the total... View
News 1

@the_riotact @The_RiotACT
Recent rainfall has #LakeGeorge looking pretty full, but is it returning to its former glory? An expert from the ANU believes another wet year in 2022 and we could see water lapping the #FederalHighway like in the 1990s https://t.co/R1TWago0qJ (20 minutes ago)