Menzies steps out on the lake shore 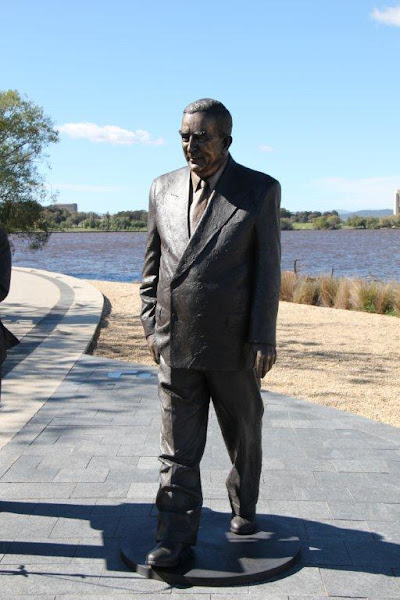 Perhaps in a sign of how far the Liberal Party has strayed from its founding principals two Labor Governments have combined to erect a bronze statue of Sir Robert Menzies by the shore of the Lake he made happen.

Joy Burch has made the announcement:

Following the 2011 launch by the Prime Minister Julia Gillard and the ACT Chief Minister Katy Gallagher of Prime Minister John Curtin and Treasurer Ben Chifley,ca 1945, the ACT Government commissioned another figurative bronze in a series acknowledging Prime Ministers who made significant contributions in the development of Canberra.

“A number of significant cultural institutions including the National Library and the Canberra Theatre Centre were founded during that period and in 1964 Lake Burley Griffin was inaugurated.”

Ms Burch said she was pleased relatives of Sir Robert Menzies, including his daughter Heather Henderson, were able to attend this morning’s unveiling.

Peter Corlett is the artist responsible.

Here’s some footage of Ming speaking at the Lake’s opening:

Nothing too liberal about the Liberal Party these days.

Old Ming would be turning in his grave everytime they mention the Menzies legacy inside the GOP, I mean, the Liberal Party.

Precisely – Abbott needs to @$#% off and form his own Party, he is NOT a Liberal.

I’m also getting mighty impatient with journalism in this country – it is high time they re-visited this article and updated it in light of Abbott’s recent activities:

What does she say to the idea her husband is a “man of trust”m these days, I wonder?

And a most public amenity it was, just a couple of weeks ago. How farsighted he was.

I must say, that statue of him looks pretty lifelike too. After seeing what a good job they did on him, I’m thinking of getting my dog bronzed at the same place.

The only place you hear accents like that today is on ABC FM. Fortunately, you never hear music like that anywhere at all. It was all eyebrows and girdles back then, no sign of sixties change that I could see. Great film.

If only the Liberal Party had been around then! There’d have been none of this lefty socialist big government centralist rubbish!

The Liberal’s were around then.

Do you even know what socialism is?

Shouldn’t that be the RGM Walk?

And a very impressive gentleman.

And though I did only see Menzies passing by,
it was still enough to make this taxpayer cry.

Nothing too liberal about the Liberal Party these days.

Old Ming would be turning in his grave everytime they mention the Menzies legacy inside the GOP, I mean, the Liberal Party.

Has anyone got a pic of the wording of the plaque unveiled by former PM John Howard when declaring the RJM walk? I think that might be a bit revealing as to why two Labor gov’s took the opportunity.

pure guesswork based on the photo background and the curve of the path:
http://g.co/maps/nvqqx

If only the Liberal Party had been around then! There’d have been none of this lefty socialist big government centralist rubbish!

You can see the Carillon at the very right of the photo’s background, so that sounds like a reasonable guess.

Jon Billows - 4 hours ago
Shane Jasprizza respectfully disagree on all counts View
Josh Wilko - 7 hours ago
Mountain biking View
Shane Jasprizza - 20 hours ago
We have some of the best beer, wine and spirits producers in the country. View
News 17

@The_RiotACT @The_RiotACT
The ACT is expected to continue its 30-year run of uninterrupted economic growth with the territory expected to grow by 2.4 per cent this year https://t.co/OpgxruIxe1 (2 hours ago)