Merry Fest at The Muse 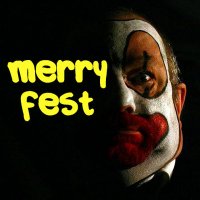 This one came across my desk and could not be ignored. Time to clear the schedule for many days following, the aftermath is almost certain to be regrettable. From the event’s Facebook page:

Merry Fest is the world’s smallest festival – proudly presented by The Merry Muse and The Canberra Musicians Club… This is a line-up to drink Polsiki Warka and eat Polish dumplings to. Featuring The Fire & Rope Band, Mr Fibby, Dub Dub Goose, The Ellis Collective and a poetry slam battle – Team Fleetwood vs Team Jacinta…

• Dub Dub Goose – The head of Beth Monzo, the arms and legs of Dahahoo and the torso of The Andi & George Band all stitched together and brought back to life with a thousand volts of surging reggae infused electricity “they had the jam packed crowd jumping and jiving… funky, brassy, and jazzy, with a hint of reggae beats” (The RiotAct)

• The Ellis Collective –The singlets and stubbie coolers are back for their only Canberra gig in 2009 with all seven members present and correct – there will be plentiful breakfast beers, black coffee, cigarettes, broken teeth and busted dreams, confessionals, apologies, simple tunes and soft harmonies. “the pick of the festival… I was blown away” (BMA Magazine)

• Mr Fibby – Zavi, Seraphina, Borracio and No Important have illegally migrated thousands of miles in the musty bowels of an overpriced shipping container to reach our shores and perform dark Balkan tales of death, love and loathing – much lauded as “an inappropriate Act to stage in Robertson, on a Sunday afternoon, after a children’s dance performance” (The Nature of Robertson Onlinezine)

• Poetry Slam Battle… Two teams enter, two teams leave! One with the prized title of ‘Polish Club Team Slam Champion Team!’. Julian Fleetwood of the front slam leads a posse of poets against BAD!SLAM!NO!BISCUIT! team captain Jacinta’s hand-picked menagerie of word spewers in a battle royale of poetry – with backing music. Judged by the audience – yes, the audience. Join your fight night host the doctor in intervals of head-to-head slam poetry as you decide who will be crowned ‘Polish Club Team Slam Champion Team!’.

Bring all your friends.

Messy… so very very messy. Make mine a Kozlak.

UPDATE: We’ve got a single pass (take a friend and go half price each!) to this astonishing event. The first premium member to put their hand up wins the ticket.

Further Update: Congratulations to RandomGit who has claimed the ticket.

The date is at the top of the story, in red… with a red box around it… and it’s showing up in the calendar on the right…

I don’t really want to join Facebook just so I can find out the DATE of this event. Maybe you could include it in the post.

Polish beers – how many must die before they recognise the dangers.

Martin Budden - 1 minute ago
Simon Trommestad actually, that's a fair criticism of me, I deserve it. BUT I'm so so so fed up with people thinking they kno... View
Michael Byrne - 1 minute ago
Luke Mac no point missed at all, you are just pushing the same thing the government has been saying. But you obviously have n... View
Simon Trommestad - 8 minutes ago
Martin Budden, case in point; You Ccan't engage intelligently, so you resort to mockery & memes. I can do that too. Sarcasm i... View
News 1

Gassed - 39 minutes ago
This is the result of the cowboy section of the construction industry opening up. View
News 43

chewy14 - 48 minutes ago
Astro, That's a gross misrepresentation. "Current R4 doesn’t have this." How exactly will those redirects benefit? The ligh... View
Business 25

Brydie Kelly - 57 minutes ago
Jackie Fuller I've been to many a birthday party and had my 30th there. It was always a warm and welcoming environment. View
Alicia Conley - 3 hours ago
If they try put a maccas or KFC there I'll be protesting View
Jackie Fuller - 4 hours ago
Been living in Chisholm for 11 years..... as a young family we would never step foot in the tavern, never felt safe to do so!... View
Business 5

whatwik - 1 hour ago
Here's road map clarity for us - "...and as we get closer, we will know when that time is and what that'll be for certain eve... View
Grace Hayes - 2 hours ago
Yeh and some small/medium business DONT qualify for grants... I’d like to see how many of these business that won’t be op... View
Opinion 35

Kathleen Beck - 2 hours ago
Jesus also says in Matthew do not add or take from the law until certain things are accomplished, Paul's covenant is adding.... View
phydeaux - 4 hours ago
" “I don’t know how serious your relationship is, but …”. This jab is definitely targeted..." Continuing harassment i... View
Ezekiel Chalmers - 5 hours ago
You know, maybe the Protestants have that one right; if the scripture isn't accurate enough that you should follow it, maybe... View
News 2

buzz819 - 9 hours ago
I still don't get why? The exposure sites are all over Canberra. Just because you want to know something, doesn't mean it is... View
show more show less
*Results are based on activity within last 7 days

UPDATED 3:00 pm: Year 12 students have been given the green light to return to school at the start of Term...
Opinion 47

Did anybody seriously believe that the ACT lockdown would not be extended this week, with cases oscillating between the mid-teens...
Opinion 43

This week, Lauren Jackson received yet another accolade in recognition of her incredible basketball career. No, it wasn’t in Canberra...
News 43