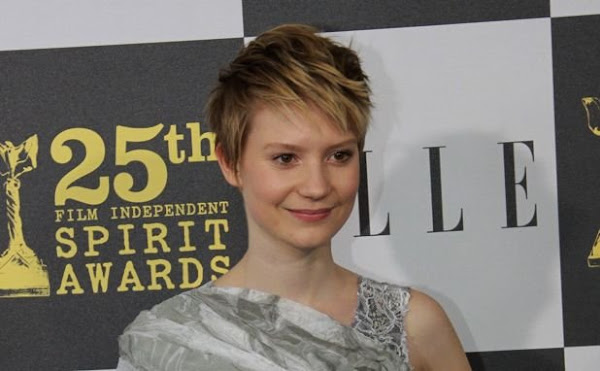 The Daily Telegraph’s Sydney Confidential column is taken aback that Hollywood rising star Mia Wasikowska is still living in Canberra with her family when not shooting the blockbusters in Hollywood.

“I don’t have a place of my own yet,” said the Alice in Wonderland star, who strolled the State Theatre red carpet on Friday to premiere new flick Jane Eyre.

“When I’m not working I still go back home to Canberra where I live with my family. It’s nice to be able to go home and just be with my family and decompress.”

IMDB reports she’s got the following projects still to come:

— 2012 The Wettest County in the World (post-production)

Well what an excellent choice Mia! Stay grounded for as long as you possibly can.

Joshua Andrew Morgan - 5 hours ago
Jayne Denise or just CAN the TRAM View
Jim Jim - 6 hours ago
Paula Simcocks I’m in Downer and I didn’t see the $150 rebate that was claimed to be for all and supposed to be listed on... View
Paula Simcocks - 8 hours ago
Liberals letterboxed Downer saying no rates cuts - we pay rates there and have cuts View
Property 7

Sol - 8 hours ago
The Canberra Liberals are just far too religion and right wing for Canberra. They need to reform and become electable and put... View
Sol - 8 hours ago
That's pretty sad if that's all the Libs can muster after 20 years, that they're "different". Perhaps if they were actually w... View
ACT Election 33

Stephen Esdaile - 9 hours ago
Can't vote Liberal, not voting Labor or Green. Looking at what the progressive are offering.... View
Frank Koch - 11 hours ago
Phillip Business Community well said View
Martin Miller - 14 hours ago
Charny Barney no 'whackadoodle ideas here . He's just plain arrogant to those who disagree with him. There is no real consult... View
News 42

Jak Kanard - 11 hours ago
If this is true, and not compromised by the buffoonery masquerading as ‘government’ in the ACT, bring it on ! View
Emerson Yang - 14 hours ago
Jack Gabriel decent sale prices View
Opinion 1

tonyd535 - 12 hours ago
Maybe a hospital first to take pressure off of the existing facilities. One for Gungahlin and another for Tuggeranong to take... View
ACT Election 8

John Coleman - 15 hours ago
Gai Hodgson Wilson consider it a reminder that we live in a democracy. They're up for a few weeks. If they stay up, there's f... View
Joe Zuzek - 16 hours ago
SP Brogues They are recyclable and I believe most parties will recycle their signs. View
Jason Preston - 16 hours ago
Thank you for the election proliferation of corflute signs I’ve got enough stakes for my tomatoes now 🤪... View
show more show less
*Results are based on activity within last 7 days

@The_RiotACT @The_RiotACT
More than 100 kindergarten students in Gungahlin received their first tennis racquets this week. They're unlikely to forget the occasion - they were signed by Canberra tennis stars Alison Bai and Nick Kyrgios, and then they had a virtual lesson https://t.co/6nLDXetsHb (7 hours ago)