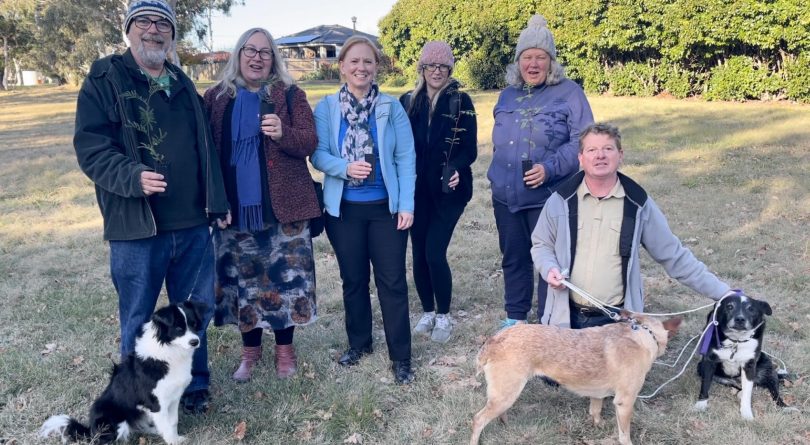 Grassroots campaigns are helping to keep Canberra’s hotspots cool during summer, with a third micro-forest planned for Holt following a CSIRO report that identified areas of West Belconnen and Gungahlin as the hottest in the ACT.

The 2017 report that mapped Canberra’s surface heat in urban areas is being used to plan a series of micro-forests in suburbs most affected by heat.

The report also looked at suburbs where high heat exposure coincides with larger populations, providing an evidence base for informed climate adaptation action such as micro-forests which are helping to combat hotter and drier climates.

Some of the hottest places in Canberra are new developments on the city’s outskirts such as Gungahlin, Molonglo Valley and West Belconnen. Less impacted by urban heat are the inner north and inner south, and areas near Lake Burley Griffin. 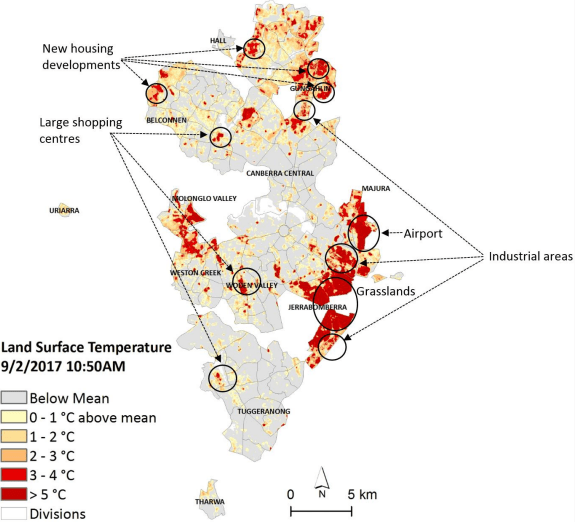 Heat map showing some of the hottest places in Canberra are new developments on the city’s outskirts, such as Gungahlin, Molonglo Valley and West Belconnen. Image: CSIRO.

Canberra’s first community funded micro-forest at the Cole Street park in Downer, built in 2019, now has 1800 native plants, including silver wattles that have grown from tube stock to three metres tall in seven months thanks to recent strong rainfall.

Plants at the park in Downer are being maintained by the local carer group as part of the project.

A second micro-forest in Watson has been people-powered by $53,000 in community donations that will enable the planting of around 1500 climate-ready native plants, while landscaping will improve the soil and naturally retain water. The micro-forest will also feature a forest classroom and give Indigenous culture a central place through bush foods and medicinal plants.

There are plans for a 1000-plant micro-forest at Sullivans Creek in Lyneham, in conjunction with the Molonglo Conservation Group, while the fundraising campaign for the micro-forest in Holt has already raised more than $4300 of its initial $20,000 target.

The Holt project, which has in-principle support from Transport Canberra and City Services, is being led by resident Jennifer Bardsley, a mother of three who is on maternity leave from her full-time role in the public service. She has also written a book called A Land of Muddy Puddles for preschool to year two children about the joys of playing outside.

Ms Bardsley said many of the pine trees in the area are diseased or at their end of life so the micro-forest project to plant more than 1500 native plants already has engaged a large section of residents from the West Belconnen area.

“We kicked things off in March when we heard about the Watson and Downer projects so a whole heap of people said let’s do it here,” she said.

“I think there’s a real drive for it, especially since COVID-19 which has given people an extra reason for their communities to connect through open spaces that are comfortable and help regenerate their local area.”

The micro-forest movement across Canberra is the brainchild of Edwina Robinson, founder of social enterprise The Climate Factory, an organisation with a mission to see more than 100,000 trees and shrubs planted in the Canberra region by 2025.

Ms Robinson said she is very excited to see the Holt micro-forest project begin to add another dimension to the ACT’s lush landscape while keeping its title of the Bush Capital intact.

“Jennifer is currently participating in a climate leaders’ mentoring program with me where we meet one hour a week for 12 weeks to work on the Holt project,” said Ms Robinson.

“We are also working on the water harvesting plans and nature play elements in the Watson micro-forest, and plan to do earthworks in August and start planting in spring.

“As the plants continue to grow in Downer, we hope to install temperature and humidity loggers into the micro-forest and surrounding park to get an idea of how much cooling the micro-forest creates.”

With hundreds of trees removed in and around Civic in the last 10 years and replaced with concrete I expect things can’t get much worse. Even trees that die in Glebe Park are not replaced. Too expensive?

Amy CJ McFarlane - 8 minutes ago
Have my brand new dash cam set up as of today because my 18 month old vehicle has already been scraped up in a car park and t... View
Kit Oates - 10 minutes ago
Jenny Graves But I am still unclear what you are basing your allegations of me being a tailgater and problem driver on exactl... View
Kit Oates - 11 minutes ago
Jenny Graves Unless there are extenuating circumstances (accident etc) or you're slowing for a red light (obviously), there i... View
Property 21

Amanda Sanderson - 13 minutes ago
I’ll give you bottomless gin and tonics Peter Taylor 🤣 View
John Sheil - 25 minutes ago
Well I have known 2 licensees over the years and neither have achieved any success. May need a new business strategy.... View
Breaking 4

HiddenDragon - 27 minutes ago
John Moulis' experience illustrates a serious flaw in the vaccination program. With the "advice" (a rather dishonest way of d... View
Maya123 - 1 hour ago
I should add that my mother also had AstraZeneca, but had no symptoms. So it varies from person to person. View
Maya123 - 1 hour ago
If the doctor vetoed it, that really strange and frustrating for you. I do hope you manage to breakthrough the barriers being... View
News 19

Capital Retro - 1 hour ago
A lot of people are still getting .45c kWh feed in tariff which is twice the new usage charge will be. Solar is so good it st... View
Capital Retro - 1 hour ago
I am assuming you are supporting the big battery concept and you are scoping what services should be turned off first to allo... View
tfx1 - 2 hours ago
Why is it Canberra people do not understand risk analysis. Some simple numbers to demonstrate the effect of this big battery.... View
Sport 6

Irene Kelly - 1 hour ago
What happened? View
Tim Van Der Vlist - 6 hours ago
No discounts for the members for resigning is a disgrace. They have to play on a mediocre (at best) course for 6 months and s... View
Property 32

Lyn Bailey - 4 hours ago
The story about the ghost walking along the Hume Highway near Lake George is true. I will remember this story for as long as... View
show more show less
*Results are based on activity within last 7 days

The Canberra Southern Cross Yacht Club in Yarralumla is about to set sail on a redevelopment of its lakeside hospitality...
Opinion 137

@The_RiotACT @The_RiotACT
A new Auditor-General report has found teacher performance could not be adequately assessed as performance management has not been "implemented effectively" https://t.co/eyqWf1Q0IN (44 minutes ago)

@The_RiotACT @The_RiotACT
Forrest Tennis Club is one of just three institutions that the Federal Government says has failed to comply with its 'moral obligations' to sign up to the National Redress Scheme https://t.co/71I4Ex10Bk (3 hours ago)