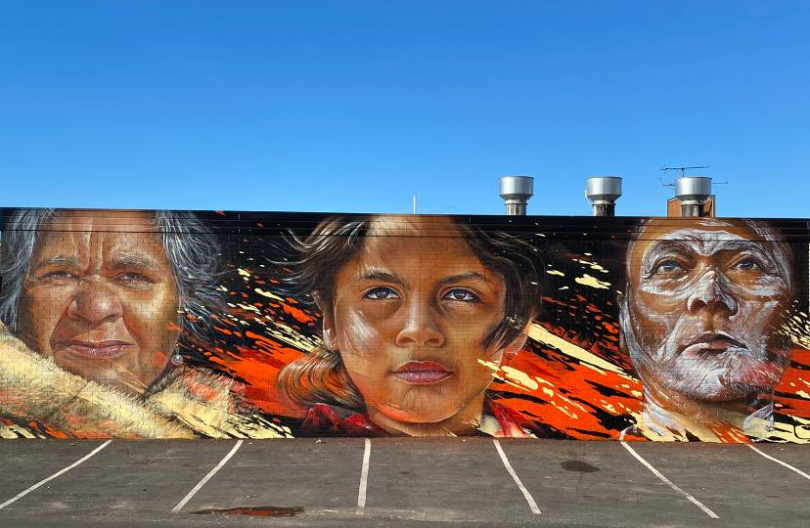 Batemans Bay’s latest mural was designed to pay tribute to Indigenous leaders on a local, national and intergenerational scale but it’s inadvertently provoked controversy, with some community members questioning the inclusion of journalist and author Stan Grant.

The project was a collaboration between the Batemans Bay Business and Tourism Chamber and local businesses, with consultation and advice from well-known local elder Loretta Parsley and Aboriginal heritage consultant Vikki Parsley.

Aunty Loretta said she and Bimi are displayed on the mural as female leaders.

“My background is in education and I was the first in my family to break the cycle and attend university,” she says. “Now my granddaughter has worked hard to become school captain.”

Bimi’s great, great grandmother wrote to King George V almost 100 years ago to ask for the right of Indigenous children to attend the local school.

The founder of Sculpture for Clyde and Batemans Bay Sculpture Walk, David MacLachlan, was previously the president of Batemans Bay Business and Tourism Chamber, and he engaged the group’s help for the mural project.

He said there had been a push in the community to have more Indigenous artworks to tell Aboriginal stories since Aunty Loretta had spoken passionately about it in 2020.

Her comments on the matter were even endorsed by the Governor of NSW, Margaret Beazley.

However, the mural has ruffled a few feathers in Batemans Bay, with one Aboriginal elder, Bunja Smith, calling for the portrait of Stan Grant to be painted over and replaced with a local male elder instead. Although he is not encouraging it to be defaced, or the desecration of any public artworks.

“I feel pretty devastated, and the lack of community consultation has served as an enormous injustice to the Walbunja people,” he says.

“A major piece of artwork like that should have involved the whole community, not one family.”

Bunja says the artwork seems to be suggesting there are no male leaders in the Walbunja community, and that it has been put up as an insulting Welcome to Country.

In response, both Aunty Loretta and David say the mural was never intended to serve as a Welcome to Country, nor was it ever meant to be fully representative of the Aboriginal community in the area.

“The concept was leadership on a national, local and future scale,” says David. “We wanted it to be intergenerational and also span the entire nation, as well as Batemans Bay.”

He adds that the intention was to do something good to get more Aboriginal art up around the place, not to create controversy.

“I’m of Scottish heritage so not only do I not want to get into black politics, I don’t have a right to,” says David.

“We chose Stan Grant because he is a unifying figure on a national scale. His family were down at the mural and they were really impressed.

“We raised more than $30,000 for the project, and we want to celebrate it, not dwell on the criticism. The intention was not to divide or hurt anyone’s feelings.

“The chamber has been involved in a number of Indigenous murals. We’ve spoken to different people in the community at different times.

“This is the first time we have been critiqued in this way.”

Aunty Loretta explains the mural sits on private land, and that is why all community members have not been consulted.

“Obviously, we have to be careful to seek consent from the families of people who are painted, and this can be very tricky if we were to paint deceased Aboriginal and Torres Strait Islanders as they can have many descendants,” she says.

Upon viewing the mural for the first time, Aunty Loretta became emotional.

“This is the first time I have seen our black history and leadership captured in such an inspiring way for everyone to see – thank you,” she says.

Despite the criticism the mural has attracted, it’s largely been welcomed by the South Coast community.

It joins other artworks that have popped up in town, on Innes’ Boatshed – a private commission – and along the wall between Orient Street and Murra Mia Walkway.

Criticism from Grant is a badge of honour!

Russell Nankervis are you qualified to ask that question?

Holy moly, what a stunning artwork!

The issue here, as stated in the article, is around the conversations/consultations (or lack thereof?) with local aboriginal groups. Does the council have an aboriginal partnership team or personnel? Hope so. And if not, then this may be the positive catalyst to reinforce that important part of this role in council, and for other councils to observe from elsewhere, and strengthen this role. 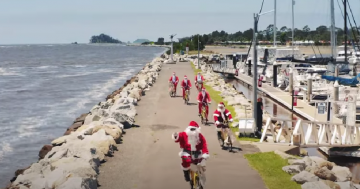