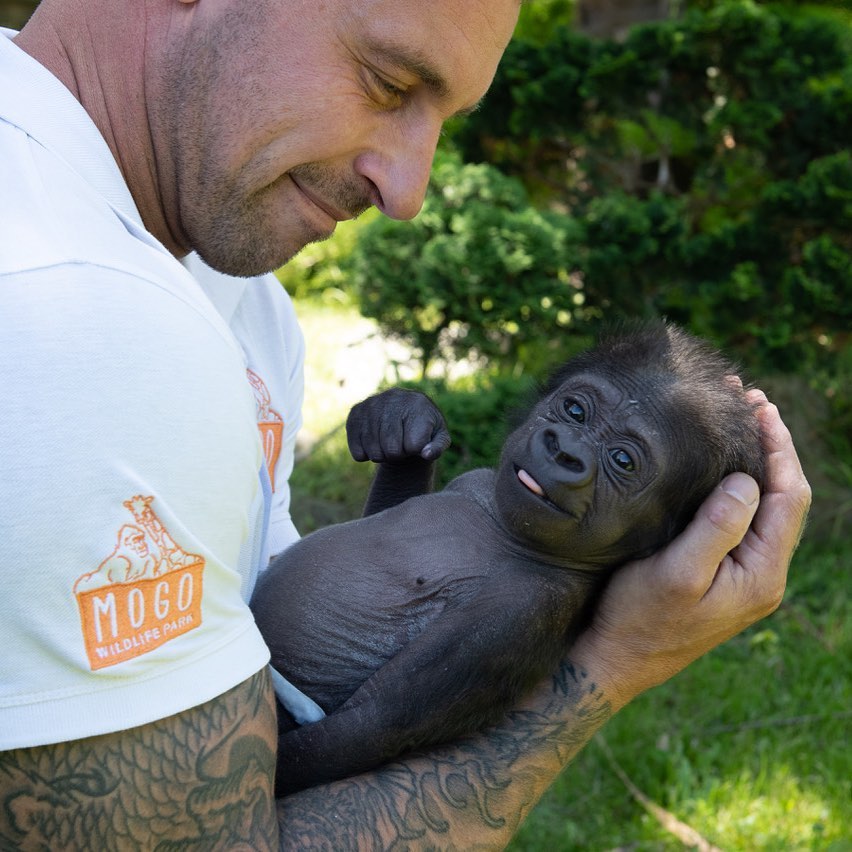 A cheeky seven-week-old baby gorilla will make his first public appearance at Mogo Wildlife Park this weekend, 10 and 11 December.

Born on 21 October, baby Kaius had a shaky start to life and is being hand raised by keeper Chad Staples after being rejected by his mother Kipenzi, one of the zoo’s western lowland gorillas.

Kaius has gained a huge following on Zookeeper Chad’s social media pages as his incredible journey has been documented almost daily.

Chad is proud to finally introduce him to Mogo Wildlife Park visitors at 2 pm on Saturday and Sunday.

Visitors wanting to see Kaius will only need to purchase admission tickets to the zoo or present a valid Mogo Wildlife Park annual pass for entry on the day.

Kaius was the first baby for Kipenzi and the first infant born to the Mogo troop.

Chad said Kaius seemed to “just change before my eyes every day” and continued to put on weight and get stronger and stronger.

“He is so alert in his awake times, his eyes follow movement and just take in this big wide world,” he added.

The newborn drinks his bottle and then loves to find his thumb to drift off in his drunk on milk stage.

“He has his version of a little cry call when I stop cuddling him to change a nappy … which breaks my heart every time,” Chad said on his Facebook page early in the journey.

Chad admitted Kaius had become his favourite animal at the zoo, the pair forming a strong bond with feeds, cuddles and six nappy changes each day.

“It’s a long road but little positive steps each day,” he said.

“As you can see he is just so bright and full of life … he even drinks so quickly sometimes he gives himself the cutest hiccups.

“We do feeds and nice awake times with the family both in the night dens and at the training window to their exhibit.

“Sometimes everyone is interested and sometimes we are paid no attention at all … but Kaius is there every day with the family.” 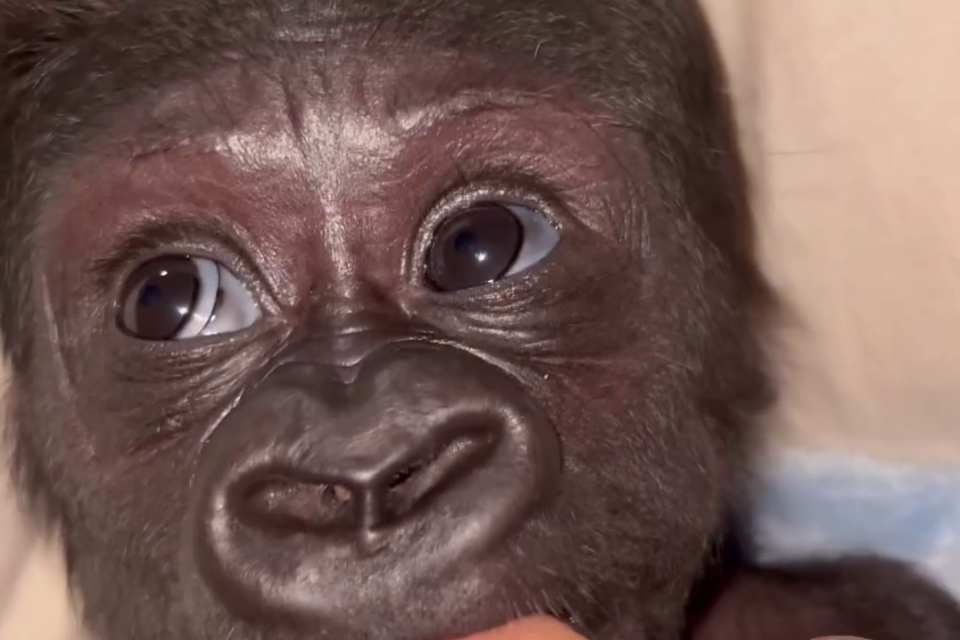 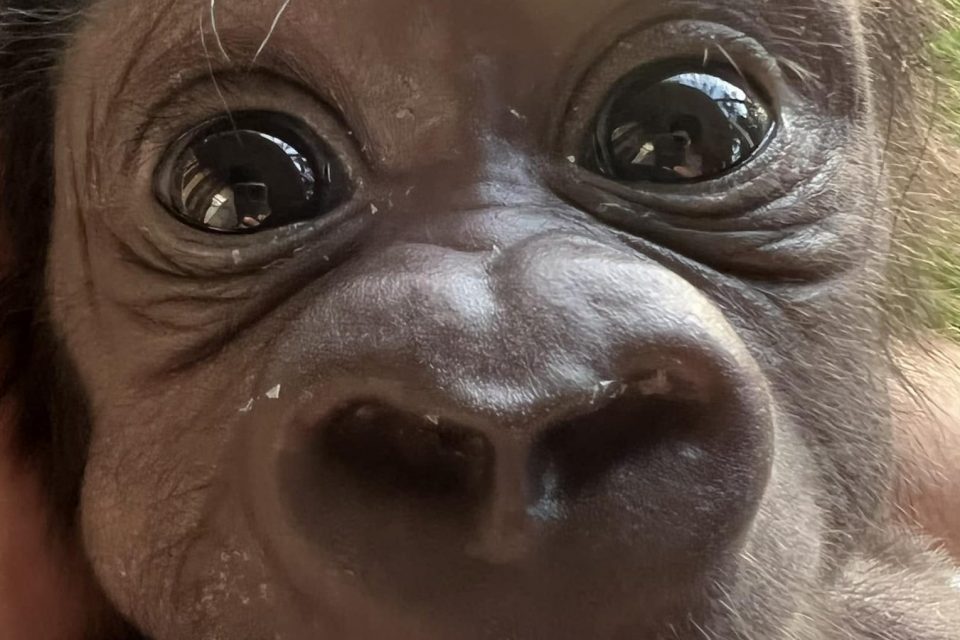 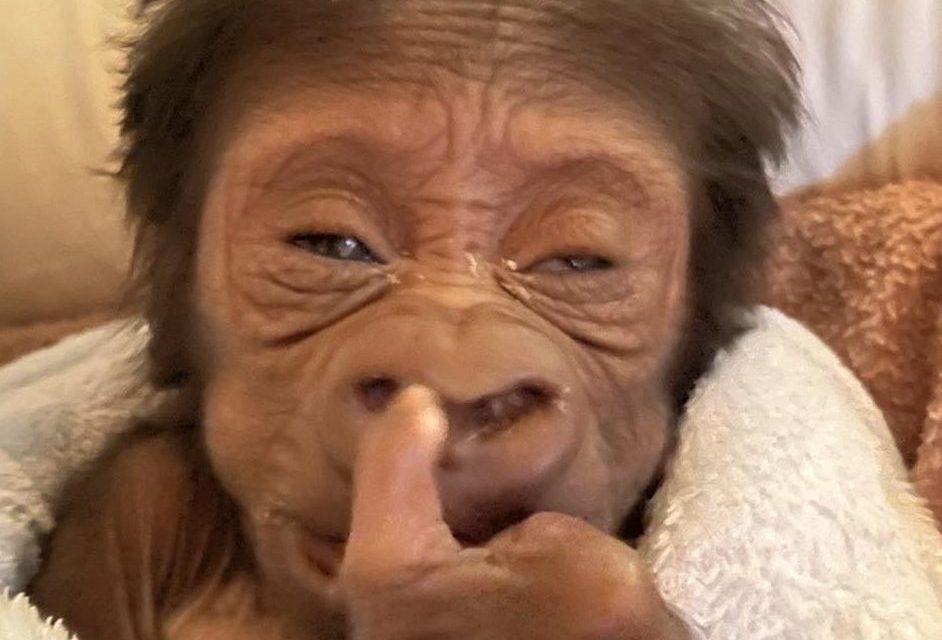 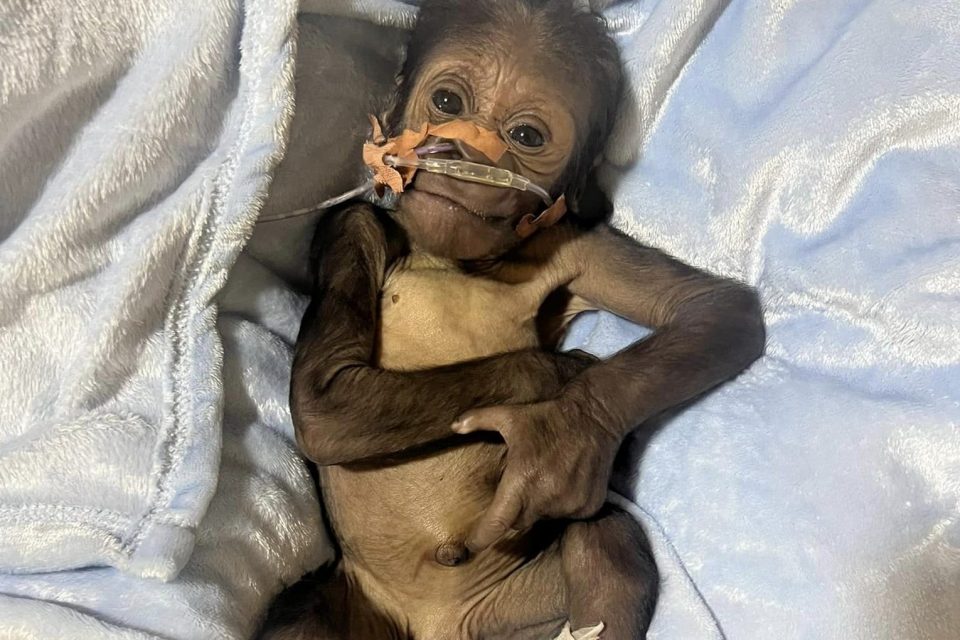 Chad said he witnessed a beautiful moment with Kisane, Kaius’ dad who normally could be quite aloof with him.

He is hand raising him because, after a series of uncontrollable events, his mother wouldn’t care for him and wouldn’t accept him back.

“Please understand that my goal is to reintegrate Kaius back with gorillas,” he told his social media followers around the world.

“He is a tiny baby now but I want to see him as a beautiful, strong silverback in the future with his own family group to look after.

“Right now a lot of his care mimics the exact care you would give a human baby with all of his nutritional requirements, his hygiene and medical care but also in some ways most importantly his emotional care and development.

“Kaius needs to know he is loved and protected just like a baby and please know I am providing this now around the clock.

“Everything I possibly can to do with his care I do in front of all of the gorillas in his extended family so even though they know he is separated physically now he is still part of their family.”

Chad said gorillas were intelligent beyond measure and this included their emotional intelligence.

“Thankfully I had built so much trust with the gorilla family prior to this that they truly can see and understand what I am doing with him and still see him still as some part of their family,” he explained.

The name Kaius means “rejoice” which Chad said was fitting as he “lost that sense of joy at his arrival because of the tough start to life he was dealt, but rejoicing his arrival is what we should be doing”.

“It also carries on the family tradition as his mum, dad, grandma and grandpa all had names that started with K,” he added.

As a newborn, Kaius required nasal feeding tubes and oxygen and a group of specialist neonatal doctors and nurses were called in to treat the baby for sepsis pneumonia.

At the time, Chad said Kaius’ recovery was taking five steps forward and two steps back, but a silver lining was having access to the baby when he began to crash, so “some real heroes could swoop when crucially needed”.

He said Kipenzi did a great job birthing her baby, cleaning and nurturing “like an absolute pro” and after some time took the baby up to suckle, however her contractions didn’t continue so she was unable to birth the placenta.

“She continued doing everything right with baby, and both Grandma and Dad were interested in the new arrival,” Chad said.

“Second challenge came around eight hours later when dad Kisane took baby from Mum. He was very gentle and caring with it, very attentive when it would make noises but would not return it.

“We will never understand why he intervened like this, he may have known something was still not right with Kipenzi or he may have just wanted the baby to himself, regardless this was not the paternal role we needed from him.

“Around 14 hours later, Kisane finally left baby and we could rush in to retrieve it.”