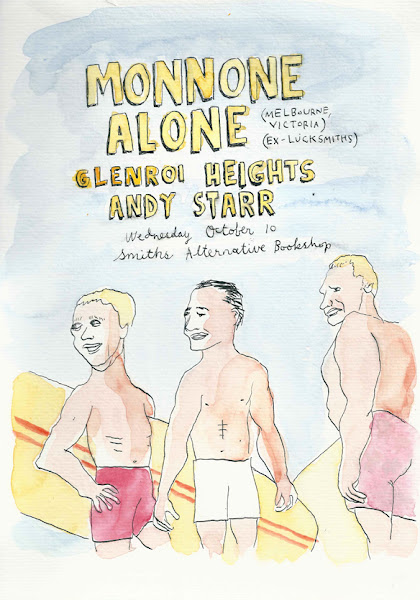 This in from Glen Martin:

Quite note to inform y’all that Mark Monnone, formerly of the Lucksmiths, will be in town on Wednesday Oct 10 to play a little show at Smiths. Support comes from self (in solo ‘Glenroi Heights’ mode) and Andy Star (of Holden Caufield fame). I think tickets will be an awkward yet cheap $7 on the door.

Here’s some PR stuff
As bass player and co-songwriter in The Lucksmiths, Mark Monnone was responsible for such radiant moments as ‘T-Shirt Weather’ and ‘Take This Lying Down’. Since the Melbourne band’s demise in 2009, Monnone has sharpened the focus on his songwriting and resurfaced, with heart on sleeve, singing tales of urban romance and misadventure.
The Pink Earrings single (released on Lost And Lonesome) is his debut release as Monnone Alone — a slightly misleading moniker considering he rarely performs solo. In this instance he has Drew Cramer (Still Flyin’/Personal & the Pizzas) and Utrillo Kushner (Comets On Fire) helping out on bass and drums respectively. Recorded by Cramer in his San Francisco basement, the sound is raw and immediate and recalls the unfettered simplicity of early Pastels and Television Personalities.

Mess & Noise said this about Monnone Alone
In brief: A longtime solo outlet for its namesake founder – also of Last Leaves and the global roster of Still Flyin’ – Monnone Alone has finally recorded a debut LP, Together At Last due early next year on Monnone’s Lost & Lonesome label. Apart from collaborations with friends all over the world, the band’s live version includes Connal Parsley (Francis Plagne) and Gus Franklin (Architecture in Helsinki, The Smallgoods). As for the music, it’s classic indie pop with groggy vocals worthy of Stephen Pastel.http://messandnoise.com/articles/4517534

Lucy Irene - 59 minutes ago
Mmm, not sure why ‘rainbow’ roundabouts could be an issue, curious! View
News 36

Capital Retro - 5 hours ago
When you say "we", who exactly do you mean? How about you lead by example and tell us what you would do because many before y... View
chewy14 - 6 hours ago
Robert, Yes we do. The first part of that would, however be to admit that Indigenous people commit crimes at rates many times... View
Robert - 6 hours ago
Those numbers reflect the numbers of indigenous people in our jails. Surely we need to do something about aboriginal people b... View
show more show less
*Results are based on activity within last 7 days