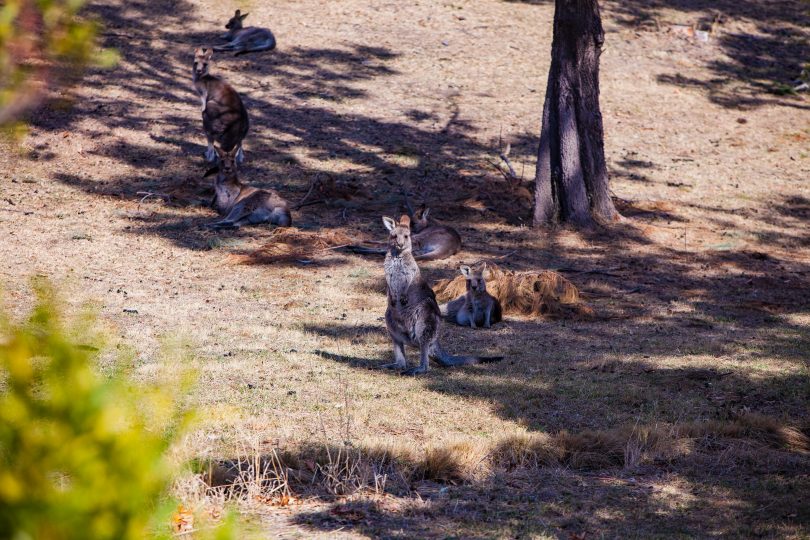 More than 4000 Eastern Grey kangaroos have been killed in the ACT’s largest cull to date, according to the ACT Parks and Conservation Service.

The Service’s Acting Director, Justin Foley, said this year’s cull was the largest undertaken in the history of the program in terms of numbers and sites to be targeted due to dry conditions across Canberra Nature Parks that have taken a toll on grassy habitats across many reserves.

A total of 4035 kangaroos were culled across an unprecedented 13 sites, with an ACT Government veterinary officer conducting spot checks during the program, finding they were all killed humanely.

“Many of these sites are challenging in that they are small reserves located on the urban fringe,” Mr Foley said. “It is a credit to the professionalism of the contractors and staff from ACT Parks and Conservation Service who were able to deliver the work safely and effectively.”

The culls are conducted by professional shooters to protect grassland and woodland sites from overgrazing.

Last year 3253 roos were culled across the territory.

Advertised closures for Mulligans Flat Nature Reserve for rabbit eradication will continue through to October 2019.

I wish they would cull some brown snakes as well.

Good! More of it needs to happen

Yeah, numbers are too large so they cull them. Means kill them. Sad in a way but necessary. Pity we can't harvest them for pet meat at least.

Shane Richards kangaroos have feelings to you know😉

I wondered why I didn’t see any today. I was a little sad that I didn’t. The record number isn’t an achievement.

There’s a lot of criticism of the cull but it works. Each year prior to the cull Kangaroo Alley – the area of Athllon Drive between Beasley St and Sulwood Drive i is swarming with them but after the cull I can drive to the gym in the morning safe in the knowledge I won’t be involved in another near fatal accident involving ramming into them.

Applause for the people organising and implementing the cull. May there be many more.

You wouldn’t know there are 4000 less. Very sad, but something has to be done I guess.

Damien Kline... get into it

Jason that’s a lot of Drywors 😳

A drop in the bucket.

Ches Boothman Good point! I wonder if these “roo steaks” could feed some less fortunate Canberrans???

Philippe Macleod sure could 👍

Sadly the culled animals aren't allowed to be used for either human or pet food, I believe the zoo can take some (but not 4000), but they're normally buried in large pits and left to rot. I guess that feeds worms...

https://www.canberratimes.com.au/story/6296272/act-government-sends-80k-of-roo-meat-to-tip/?fbclid=IwAR1Sg9GTv7W84lESR0XtPRU6ur4X9CouxAa9cUUAYj_PqFXxOlfsbbReaDk yes, they were all buried at the tip, you can already get cheap roo mince at coles, in the pet food aisle it's $4 a kilo in the big 3.2kilo bags

LJ Tas what a shame Surely something could happen so they are not wasted.

All that effort just to rot

Zoo animals will be well fed for a while Ches Boothman

Richard Flanigan...that’s why we didn’t see any 🦘😢

Philippa Ellis still hundreds at my place just out of town

Really Philippa, they are all around my workplace and I still see them making their way through suburban streets.....I live in Belconnen.

Paul Morshead - 13 minutes ago
Graeme McLennan you finally made a “list” View
Troy Scott - 1 hour ago
I think I will boogs I was pretty good at it at 7 View
Steve Hugler - 4 hours ago
Troy Scott there’s still time for you to make a shot put comeback mate. 3 years and you could be at the Olympics!... View
Community 37

Coral Alexander - 24 minutes ago
Charlotte Ellen yuuus as if you could miss it. Paola Leon you in?... View
Caroline Le Couteur - 2 hours ago
Please don't release a heap of plastic rubbish. We have enough problems.... View
Tracy Parker - 3 hours ago
Perth do a duck derby every year where around 15000 are released, they re use them and collect them all at the end of the eve... View
Sport 19

Dave Horsley - 26 minutes ago
How would a club like Penrith convince quality players to travel 6+ hours every week plus training when they could just join... View
Sione Nonehh Taufui - 45 minutes ago
Sione Taufui ouaaa 😂😂😂 party party... View
News 238

Lucy Doan - 27 minutes ago
Pls plant trees like those in inner North or inner South, do not convert new suburbs into Belconnen-style please! View
Jarrad Job - 3 hours ago
Doug Hovi Have to replace all the trees they cut down to make room for all the solar farms in the future🤣... View
Robert Woodrow - 3 hours ago
Tahlia Bruce or possibly not .... View
Lifestyle 30

kenbehrens - 2 hours ago
Vaccines offer protection against severe infection and in most cases, death. It doesn't prevent people contracting Covid, get... View
kenbehrens - 2 hours ago
Sam, With respect, you appear to be poorly informed. Flu typically kills the elderly or those with health conditions. It is a... View
JC - 3 hours ago
Not going to disagree. Facts and politics don’t mix. Regardless I would still trust what comes out of Andrew Barr’s mouth... View
News 19