Treat your partner
with dessert from Super Emoji
Buy now

More Than Just ‘Toasties’: The Story of Toasted 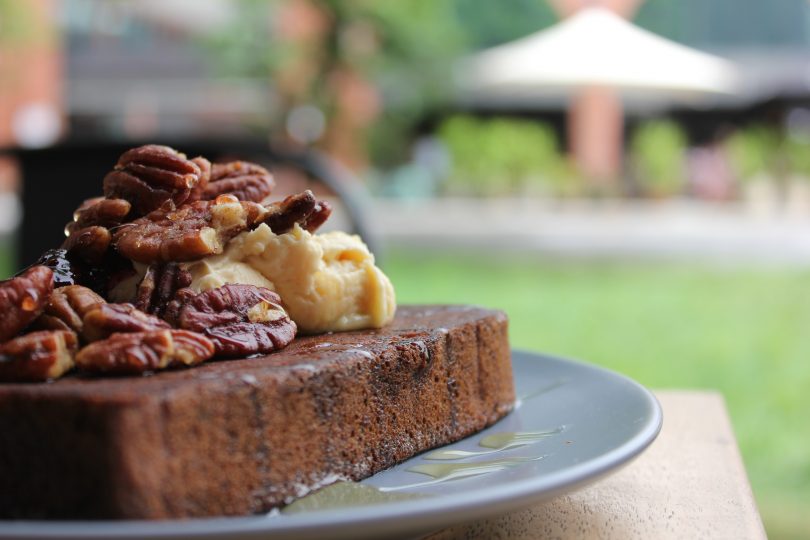 There are plenty of ways to enjoy a toasted sandwich. Seeking inspiration? Head down to Toasted, where the humble toastie receives a stellar makeover in this trendy, corner-shop cafe.

Located on Braddon’s popular food strip, Toasted offers a variety of toastie combinations and flavours that will make your stomach cheer for more, but that’s not all they’ve got up their culinary sleeve.

Partners Brittany and Josh set up the quirky little spot over a year ago which was inspired by American toast bars. With no prior knowledge of or experience in the culinary world, the pair simply took a chance to pursue something they were both passionate about – good food. As Brittany explains:

“The concept of Toasted and everything about it just kind of evolved. [Josh and I] were both cycling in America and we went to this toast bar, and we kind of took some ideas from that and built it in our own little way. “ 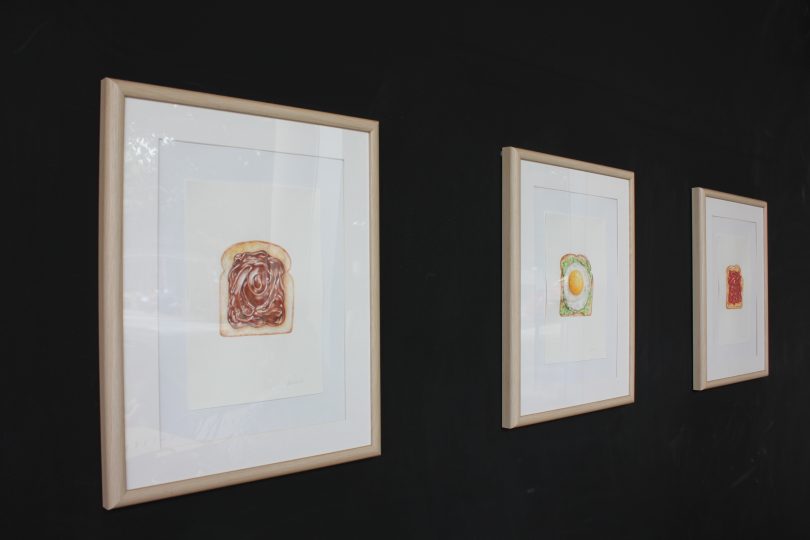 The American toast bar theme is present throughout this little brunch nook.

Setting up shop on the corner of Lonsdale Street and Elouera Street, Brittany and Josh have established one of Canberra’s most popular little nooks.

Brittany was a nurse and Josh a professional cyclist prior to owning Toasted. Brittany confesses that both were go-getters and thought ‘why not’ at the chance of opening their own food establishment. “Everyone thought we were crazy,” she said.

While neither of them had a culinary background, both were avid foodies and healthy lifestyle enthusiasts.

“When we both cycled professionally we were both into nutrition and that kind of thing. We loved to cook our own meals and have people over and all of that.

“I was probably in it more so than Josh at first, but since we have opened, Josh has just got right into it. He is the Chef and he creates everything on the menu. He learnt everything here. We have a friend who used to be a Chef and he came and helped us just plan everything [at the start].” 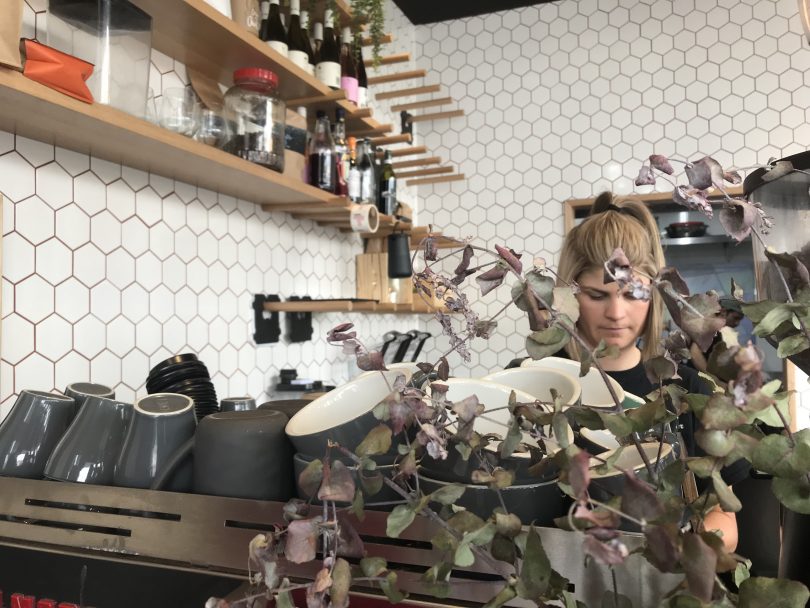 Everything for Brittany and Josh at Toasted is self-taught.

Among the long list are breakfast dishes such as granola, acai bowls, and green pea fritters. It’s also a bonus that it all happens to be vegetarian-friendly. Toasted have even started offering crumpets for those who crave simplicity early in the morning. 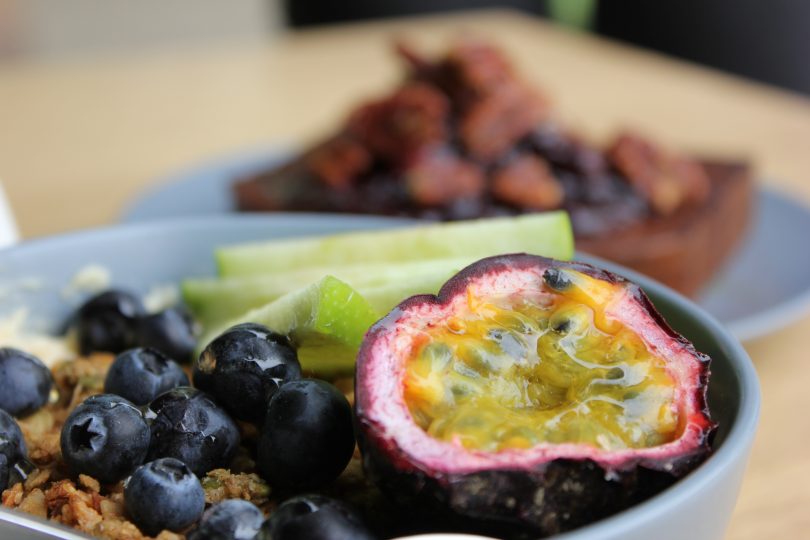 Granola is a crowd favourite at Toasted.

Brittany does admit that all the ‘toasties’ on the menu remain the most popular, but other favourites include the Jerk Chicken Sub, the Three Cheese Bacon, and the Avo Good Day. The last one is especially great because it allows people to add what they want to it, suitable for both veggie and meat eaters.

Those seeking other alternatives like gluten-free or vegan options are also well catered for.

“We have two types of gluten-free bread so there is only about one or two things that we can’t make gluten-free on the menu. We also have vegan cheese and for vegans, we are happy to improvise and change the menu around for whatever they are after. There is also a lot of vego options and again we swap out bacon for an egg or halloumi or whatever need be.”

The size and variety of the menu at Toasted means that it is basically like a big breakfast menu. 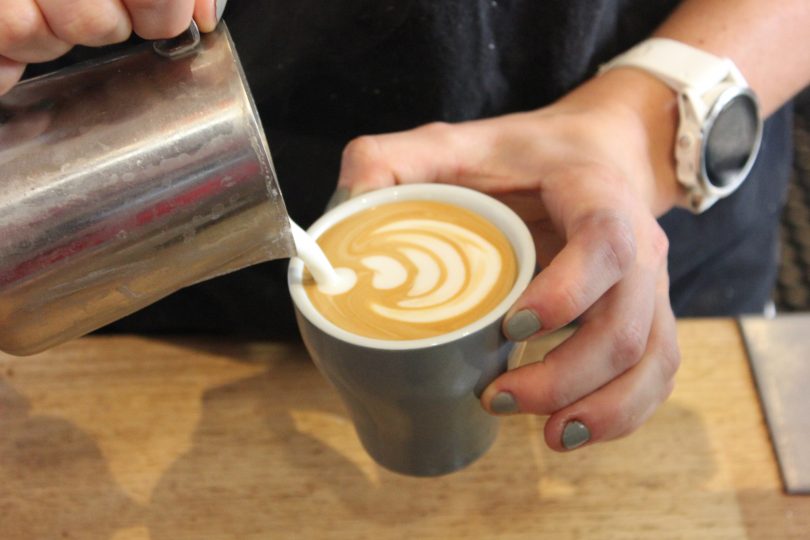 “A lot of people have this perception that we just do toast, which isn’t actually the case. We have changed our concept a little bit, because if things [on the menu] don’t seem to be working we will change it. [Toasted] has really evolved over the year.”

Brittany also highlights how Toasted sets itself apart from the average breakfast spot: “We do our whole menu from open to close, it’s not like we have breakfast and lunch separate. You can get anything at any time of the day.”

Toasted are now also open Friday nights, having recently received a liquor license. The Friday night menu includes cheeseboards and other snacks which you can pair with your favourite local wines and beers. 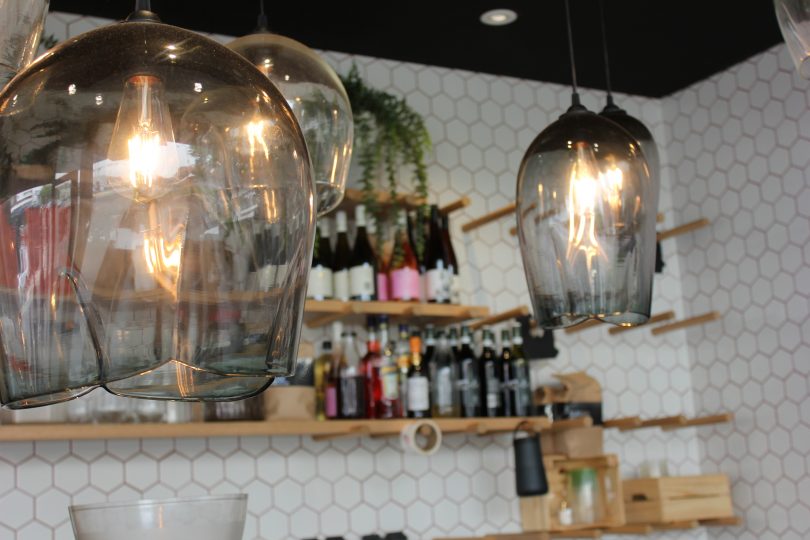 Toasted are now also open Friday nights with a selection of local wines and beers.

Toasted is located on 22 Lonsdale St, Braddon and is open Monday to Thursday 7 am to 3 pm, Friday till late, Saturday and Sunday 8 am to 3 pm.

One Response to More Than Just ‘Toasties’: The Story of Toasted
Filter
Showing only Website comments

Tried this place and was disappointed. Overpriced for what you get. small servings and rude staff. It is located in the Hipster capital of the ACT so what do you expect. Regular customers who frequent this place probably don’t own a toaster or sandwich press, or a kettle for that matter. Waiting for them to put a deconstructed vegemite on toast on the menu so we can pay $15 for the privilege.

The best indian restaurants in Canberra

@The_RiotACT @The_RiotACT
Running seven marathons in seven states in seven days will be uncomfortable says Kaiti Penrose who is one of six runners in the region taking on the Bravehearts challenge to end childhood violence https://t.co/Briu2xeOMC (59 minutes ago)