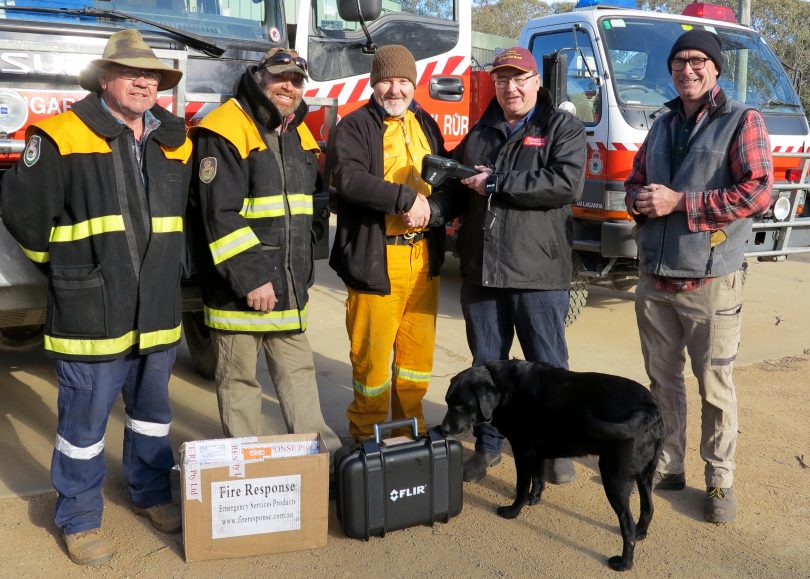 They are not standard issue for the local brigades, and are often outside their budget. Mongarlowe RFS has said their camera can be shared with surrounding brigades.

Nick Fry, branch manager at Braidwood Community Bank, says our local volunteer firefighters are our unsung heroes and deserve all the support they can get.

“Mongarlowe brigade approached me after they’d heard of the benefits of the thermal imaging cameras from the other local brigades. So I encouraged them to put an application into the bank for funding, and it was approved by the Board straight away.

“It’s a great machine for them, and it’s our little way of trying to assist them in the work they do. They really are incredible – they work so hard, and are out most weekends doing training on top of their regular jobs. NSW RFS is the largest volunteer organisation in NSW and I believe they are our unsung heroes.”

Braidwood Community Bank also funded the purchase of a portable freezer, which allows the brigade to take cold drinks with them when they are out fighting fires, and helped Farringdon RFS purchase new communication equipment.

“It helps us all along to help them. We’re in the middle of a drought, and over the past two weeks the Braidwood Brigade has been called out five times – in winter! But it’s because everything is so dry.”

Nick says that one of the prime objectives of community banks is to give a percentage of their profits back to the community. For Braidwood, this has resulted in the branch giving back almost $2 million across the past 16 years in sponsorships, donations and grants.

“For a little town we’re doing mighty well,” says Nick. “So many of Bendigo community branches are out in rural townships, and the more that people bank with us, the more funds we can hand back to community organisations, such as the RFS. People can actually see what happens around us when we have the funds to help amazing groups such as the local RFS. I would like to give them more!”

As with most other community banks, Braidwood opened up when all other banks in the area had closed down – leaving locals with no access to banking services.

“There are more kids in most Canberra high schools than there are people living in Braidwood! We’re a really close-knit town. When we (the bank) turned 15 last year, we bought a clock for the town which sits on our roof. It’s called Baby Ben and does the quarter hour chime and the hourly bong. It depicts the history of Braidwood with some of the characters on it. We did it to reinforce the town’s culture, and everyone loves it.

“The next time you head up this way, make sure you pay a visit and check it out!”

Braidwood Community Bank is located on Wallace Street in Braidwood.

To find your local community bank here in Canberra, pop into any one of the Canberra Community Bank branches in:

George Watling - 6 hours ago
No body is saying no community housing. What people are saying is don't build it in our parks and open spaces. Once they are... View
Marc Edwards - 12 hours ago
Brian Ashcroft well Brian it’s an issue that causes the nimbyism, the belief that the upkeep or lack of is the issue. View
Brian Ashcroft - 12 hours ago
you were making sense until the gardener part View
Food & Wine 15

azel - 9 hours ago
We're complaining about how this is costed. But were not asking about the rail and the hospital plus the massive debt View
News 81

azel - 9 hours ago
We're is the government getting all this money from ? All this rail services are just going to raise rates again . The curren... View
Jason Butterfield - 10 hours ago
Really it needs to be built to woden and tuggers they have been lacking a decent bus service for years, in saying that they s... View
JC - 10 hours ago
Care to point us all to a link where these known requirements are located? You mentioned some that I will agree are very well... View
Opinion 2

HiddenDragon - 10 hours ago
"The Greens’ vision for an ad-free city will ban roadside electoral advertising, introduce offences for roadside ads on ill... View
Beau Locks - 11 hours ago
Libs' housing plan works out at to $83k a house. Even assuming housing providers borrowed on top of that, the income stream f... View
Community 2

Steve Wood - 11 hours ago
$909m in the red... who's paying for their promises.. us!! I don't want a tennis court or ice skating complex I want lower ra... View
show more show less
*Results are based on activity within last 7 days

Volunteer fundraisers: Unsung heroes when it comes to local hospitals