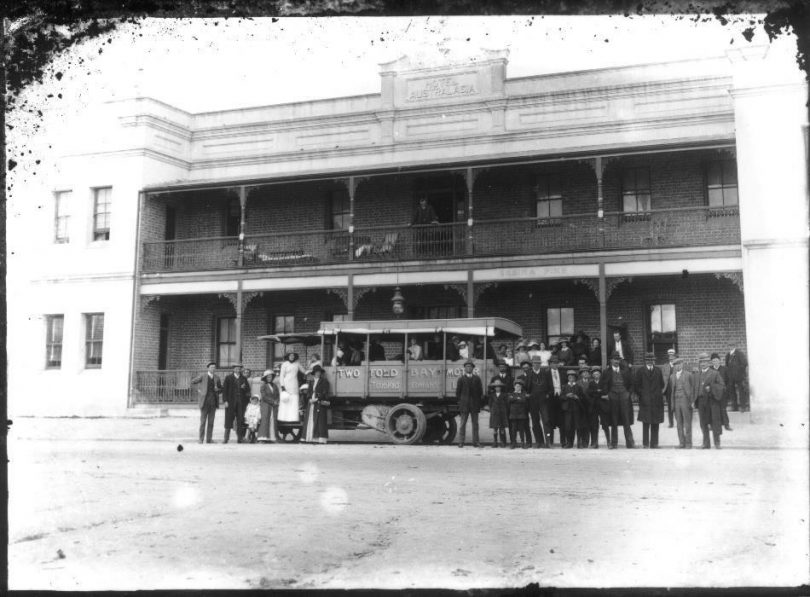 The historic facade of the Hotel Australasia in Eden, 1920’s. Photo: The Australasia Facebook.

The long history of the Hotel Australasia on Eden’s main street has taken another twist, with the future of the derelict but much-loved watering hole again in limbo.

Negotiations around the sale and restoration of the 113-year-old building were progressing with the successful tenderer Irisha and Rubycove Pty Ltd, but seemed to end abruptly late last month with Bega Valley Shire Council advising that the developers had pulled out prior to contracts being exchanged.

According to Council, negotiations had resulted in an agreed sale price, along with commitments concerning the restoration and use of the site and the development of the laneway in accordance with the site deed.

Discussion around the future of the Imlay Street pub, affectionately known as the ‘The Snake Pit’ dates back to 2013 and takes in three different Mayor’s.

Had it not been for community activism and the action of shire councilors to buy the building in 2016, most of the structure would have been hit with a wrecking ball and the site would now be a supermarket.

The pub served its last beer in 2010 and wasn’t on the Shire’s heritage register when developers moved in. It is now listed, which gives it a level of protection.

The grand vision is to see the 1920’s facade restored, a history that hasn’t seen daylight since the current facade was erected in the 1950’s.

Council this week resolved to go back to the market and sell the building, which it purchased for around $500,000 and has since spent money on covering maintenance costs, legal, and marketing expenses. Council has decided to make that amount public but the exact figure has so far been unavailable.

Eden’s three real estate agents are now being invited to submit a marketing proposal before Council moves ahead with listing the building for sale on the open market in its current condition.

“That doesn’t preclude anybody from submitting a proposal to Council in the meantime,” Mayor Kristy McBain told About Regional.

“I am aware there are discussions happening and people saying they have proposals and we are all ears.

“Council and the community all have the same end goal and that is to make sure that the Australasia is restored,” Cr McBain says.

Crs Tapscott, Seckold, Griff, and Dodds argued that Council should end the continuing impasse and take on the restoration project itself.

Cr Sharon Tapscott is making an impassioned plea to seek grant funding, an avenue she says hasn’t been tested by Council before.

While expressing frustration at the latest pothole, Crs Bain, Naidin, Allen, McBain, and Fitzpatrick restated their confidence in the private sector as being the best placed to move the idea forward.

Cr Robyn Bain suggested it would be hard for Council to secure grant funding for the town when so much investment was already being injected into the redevelopment of Eden Port. Cr Bain pointing to $100 million dollars worth of funding from various levels of government. The historic 1920’s facade of the Hotel Australasia sits beneath waiting to be uncovered. Photo: BVSC.

However, in another twist, the Mayor revealed that Irisha and Rubycove have since been back in touch expressing a desire to restart negotiations.

The Mayor says she is not yet clear what the company needs to do to re-engage with the process.

“Our lawyers and their lawyers have been negotiating back and forth for months,” Cr McBain says.

“All that we required was the laneway access, the restoration of the facade, and the demolition of the non-heritage aspects which are falling into disrepair at the rear of the building.”

Speaking to About Regional, Simon Petzierides from Irisha and Rubycove says their heart is still in this project.

“We want to get this resolved and move forward,” Mr Petzierides says.

Mr Petzierides says his company is committed to restoring the facade and maintaining public access to the laneway, but he seems to be suggesting disagreement within council has been destabilising.

“We want to get a commitment from Council that we are in control of the site,” Mr Petzierides says.

“We want to create an international hotel, this is an amazing place and we want to showcase that.”

Mr Petzierides says the Mayor has taken a positive approach and he looks forward to meeting with Council and resolving the issues.

“I want to make sure what is said is done.”

Cr McBain says, “The elected body has taken the view that the vision that Irisha and Rubycove have had is the best vision and the best fit for Eden.”

Outside of restoring the 1920’s facade and maintaining laneway access, the Mayor says, “we are happy to work with them on their vision.”

The one constant through this saga has been the dedication and commitment of the Eden’s Australasia group, members of which have been fighting for the building since 2010, and they are still in there swinging.

Toni Ward and Peter Whiter from the group addressed this week’s Council meeting, urging councilors to take on the restoration of the facade and then either sell the building on behalf of the community or find a commercial tenant.

“We are still very much here, ready, willing, and able to work with council to achieve a restored and repurposed Australasia,” Ms Ward says.

“We have been at work since the moment we found out about the failure of this sale.”

The group presented councilors with a marketing brochure they suggest could be used to find a tenant for the building once the facade is restored using grant funds.

“Simply having the facade restored of this largest and most impressive building would make such a difference to Eden, and we believe Council is best placed to do that,” Ms Ward says.

The group believes the building would be a more attractive proposition to the market if the 1920’s facade was revealed and restored first, leaving the new owner or tenant to undertake the internal renovation.

“Eden is full of incredible stories so we are going to suggest James Squire make a beer around that as they do and take on the building as a bar and brewery as they have done elsewhere,” Mr Whiter says.

“This is just another chapter in a rich history, it’s disappointing but we’ll move forward.”

Clearly, there are more twists and turns to come in The Snake Pit’s story. Perhaps the one saving grace is that everyone involved sees a future for the building, but where are the snakes in the various plans? Council now finds itself trying to reestablish a safe path for the community and this grand old pub.

John Hutchison - 42 minutes ago
Not correct. Labor are saying Zero net emissions. This means that emissions are possible, but only if offset by some form of... View
Paul Mathews - 2 hours ago
firts improve the stoopid pick-up parking...10 mins....out in the cold...jeez View
Eliza Doering - 8 hours ago
Free flights between London and Canberra 😭 Rae Coomber-Williams View
News 64

Merimbula to get an Aldi Supermarket, Eden’s history to be restored

What could the future of forestry in southern NSW look like?