Working together, enriching lives
5 May 2005

Most stupid invention. EVER!

Driving home tonight along Kingsford Smith Drive (about 7.45)and there was a complete TOSSER in a dark blue twin cab ute watching television. Yep, thats right. Driving and weaving in to MY lane, because he was laughing at “Everybody Loves Raymond”. (which basically says a lot in itself)

What sort of idiot decided it would be a good idea to put tvs in cars, under the assumption that there wouldn’t be any dickheads around that would decide watching it WHILE DRIVING was acceptable!!

These things need to be banned. This has got to be against the law, surely!

LG, a mite ticked and needing to vent.

Spiny, perhaps you should stay logged in when you’re having a go at people in future.

Things like this are forcing us in the direction of compulsory login.

sow do I but I luv getting up ty nose

I don’t lack the courage, I just know right from wrong. And how to spell.

so lurker yu have the desire but yu lack the courage. Interesting ……

“reap what you sow??” over the Simpsons?

Hey Anon, to be fair, I watch a lot of Law and Order and other crime shows, but I don’t go around dismembering people (I often want to, but I also wanted to long before I started watching these shows…the old nature v nurture I guess).

So guru yu don’t mind your child disregarding your authority and to adopt the behaviour displayed on the Simpsons. Reap what you sow I gess.

I would rather my child watched The Simpsons than just about any other show on commercial television.

Sure the modern episodes aren’t as good as the 90s ones, but it’s still an insult to group ELR with the Simpsons.

Funniest Home video should be banned internationally, except in the USA where its normal behaviour.

Child knows ELR from ads and friends places. It is banned at my place! Along with Funniest Home videos and other similar crap. Alas, she does know the simpsons.

I couldn’t see the number plate – and child didn’t read it to me, so….

As you could see what was on the screen I would suggest the you would also be able to get the number plate. Simple let your fingers do the walking and your mouth do the talking.
Next time you see that ute I bet he won’t be laffing.
Your child knows Every body loves Raymond??? Simpsons to I am gessing…..sigh
What are such parents doing on our roads???

How are you bringing up that said child….

Actually, mine child told me it was Everybody Loves Raymond…..

Um, if you were able to discover it was (puke) “Everybody Loves Raymond”, how safely were YOU driving? Sounds like you were watching TV to me.

i don’t drive because in the imminent present we have no need for cars or transportation so I can’t comment.

Yeah, my friend had a tv in his beemer that would only work when the brake was on.

I agree it’s fine for kids and stuff, but this guy was watching it while driving. It’s just so dangerous!

And he turned off towards Flynn / Charnwood. But I don’t know if that’s necessarily relevant….

You can play TV while driving, as long as the driver can’t see it (eg. see The Age).

Most responsible installations are either roof-mounted with a flip-down LCD panel or embedded in the rear of the front seats for the kids.

Pre-market TV screens in cars are wired in a way that they cannot be launched whilst the car is being driven (so I hear).
But of course anyone can now fit an after-market TV/DVD player and watch whenever they want.

I can sort of understand TV in the back seat so the driver isn’t distracted by fighting kids, but what good is it in the driver’s area? Unless you live in a city that has stand-still traffic jams for half an hour at a time.

Hell,I don’t even listen to the car radio when I’m driving,let alone watch a television show !

So something from the ABC would be more appropriate? That would add the double danger of falling asleep at the wheel.

Come on JB. You don’t usually watch the other person in the car (unless they are particularly hot).

In fact I almost qualify as Fraser, being that it is only across Tilyard drive from my front lawn.

And no, I don’t watch TV in the car, nor do I watch â€œEverybody Loves Raymondâ€.

*sigh* What is the world coming to…..

people drive with TV screens in japan, although they do have lower limits.

seriuously though, nothing is as distracting as another human being in a car.

are we going to ban them?

it probably is against the law.
i don’t get why we need to legislate common sense though
but i guess we do

where abouts was he driving ? did he turn right onto ginninderra drive, heading towards charnwood ? i hear that suburb is rather bereft of common sense 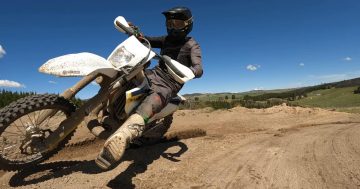