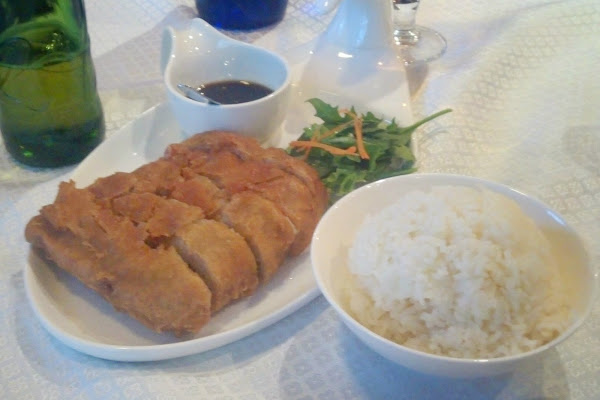 The Hermitage is gone from Civic Square, but occupying the slot and hoping to pick up the Legislative Assembly lunch business is Mr Weis.

The emphasis is on duck and dumplings, two of my favourite things.

Goosepig and I went in last night to get a bite before a show at the Canberra Theatre.

The service is friendly and trying hard, but when you’re aiming at the high end chances are your cousin doesn’t have the skills of a top waitress.

They’ve only been open a month however, asking around $25 per dish, paying over the odds for gun wait staff is really a good idea.

Importantly for a pre-theatre feed the food came quickly. Arriving at 6.55 we were out by 7.30.

The food is modern Chinese, in the Chairman Yip sort of territory. The flavours were novel, and to me at least delicious (Goosepig had saved herself for the duck only to decide she didn’t like the batter, which had an unusually thick texture, and was not well pleased).

With two beers each (Coopers Pilsner served in place of the Coopers Pale on the menu) two entrees and a shared main we were up for $75.

So the food is great, and at this price importantly novel, the service is scratchy.

For the right occasion I’d give it another go.

Capital Retro - 15 hours ago
When was the last infection of COVID 19 logged in Canberra? Compared to the rest of the world the pandemic is over in Canberr... View
HiddenDragon - 1 day ago
Even if these figures are a little rubbery right now, with the federal budget being delivered 11 days before ACT election day... View
bigred - 1 day ago
Alistair lost the election the day he declared the pandemic over. Anyone flirting with the notion of him as the head honcho w... View
News 2

@The_RiotACT @The_RiotACT
Our latest #GigGuide brings you the best local music on offer in the coming week, headlined by Signs & Symbols, who will be on stage this weekend https://t.co/uVdPG8zJTn (28 minutes ago)